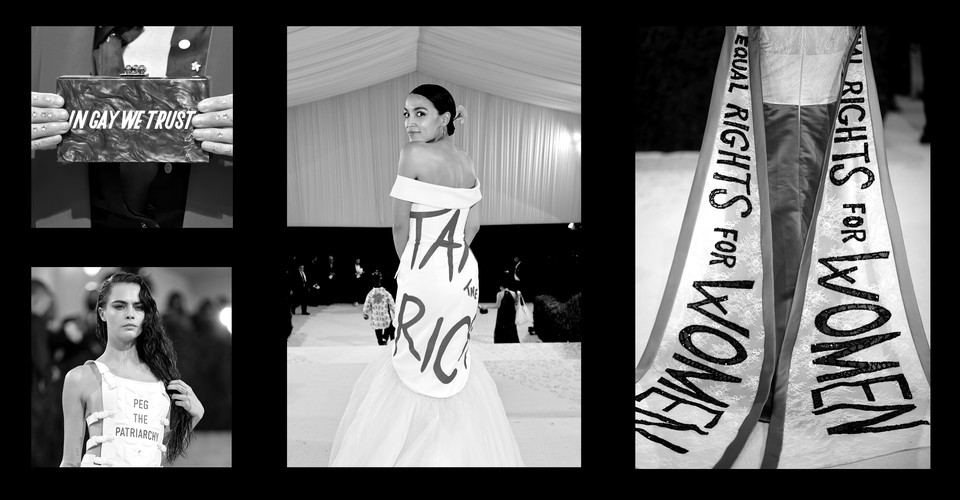 The Met Gala is a fashion barometer. Not in the boring What is the hem of the moment? meaning, but on a larger scale. This fundraising dinner is a pure spectacle, an event that only exists to be photographed, a glittery media mirage. Take a look at the photos of the after parties and you’ll see that many guests change their red carpet look as soon as humanly possible. These are clothes for posing, not for wearing. These are statements.

Until recently, this statement was simple: I’m thinner and hotter than you. Then came the rise of the stuntman garmentRihannas omelet dress, Billy Porters sun god palanquinas celebrities realized that just looking sexy in a nice outfit was of very little value at an event where everyone looks hot and wears a nice outfit. It’s an arms race with literal weapons: musician Grimes arrived yesterday with a sword made from a melted AR-15. (Maybe she thought the dessert would be a really big cake.)

The theme of the Met Gala last night was American Independence, which in earlier times might have got people playing various riffs on Uncle Sam (but do it fashion), cheerleaders, bald eagles and, for the serious but tasteless actress trying to appear socially conscious, Pocahontas (but do it fashion). Because it’s 2021, however, wooing the rest of us lumpen Morlocks by buying your perfume or watching your movies is no longer reason enough for you to attend a $ 35,000 dinner at a museum. The headlines generated by yesterday’s gala were about a new trend: activist couture.

Read: End of Times at the Met Ball

A viral tweet brought together the four most notable examples: the Cara Delevingnes model Peg the patriarchy vest, football star Megan Rapinoes In Gay We Trust handbag, suffragette dress of US Representative Carolyn Maloneys and US Representative Alexandria Ocasio-Cortezs Tax the rich dress. I think we can all agree that activism is a bit over and generally embarrassing, said a commenter that goes through @thomasfreeboy.

The backlash was fueled by a broader disenchantment with performative and corporatized activism. The Met Gala took place just days after Deadline reported on the existence of a new CBS reality show called Activist, in which hosts Julianne Hough, Priyanka Chopra and Usher will lead teams competing to advance their causes. The prize will be a chance to go to the G20 summit and be ignored by world leaders, as Greta Thunberg does. The inevitable flashback to that announcement led the producers to release a statement declaring, This is not a reality show to trivialize activism. On the contrary, our goal is to support activists everywhere, to show the ingenuity and dedication they put into their work and to amplify their causes to an even wider audience. The hurt-professional tone of this statement is the peak of 2021. How dare Anyone think a reality TV show wouldn’t do justice to the seriousness of an important topic? Somehow I remembered the British reality show The farm, which promised insight into the challenges of rural life, but is now best known for the scene in which David Beckham’s former personal assistant masturbated a pig. It’s edutainment.

Obviously, the most controversial Met Gala outfit belonged to Ocasio-Cortez, because the right loves to hate her and so she is the kween of the left Twitter. How can we bear to jump into this Speech when the positions are already so clearly marked out in advance? On the one hand, you have the dismissive argument that wearing a dress won’t solve poverty, honey; Soviet communism did not start with Lenin wearing designer pants embroidered with COLLECTIVATE FARMS. On the other hand, AOC advocates bristled with the certainty of the condescending dunk tweets to come and were ready to assert that catchy slogans have always been an important part of politics.

Like all good internet disputes, both sides are half right. Ocasio-Cortez set her base on fire, raised her profile and reminded everyone that she is the standard bearer of the militant left today. What politicians wear Is Many right-wing AOC critics spent the 2008 election arguing for the vital importance of flag pins as a symbol of patriotism, as if the future of the republic rested on the adornment of Barack Obama’s setbacks. Your empty gesture is my powerful symbol of solidarity. In Britain, suffragists pioneered branding, handing out medals to their hunger strikers and printing postcards of their attractive young leader, Christabel Pankhurst. Today, the ubiquity of the rainbow flag is a visible sign of LGBTQ acceptance. The power to see how many people support a cause is one of the reasons why marches are such a vital part of political movements. We are social animals. We love to do what others are doing.

To read: The Met Gala and the honest red carpet

At the same time, the Met Gala is essentially a costume ball, which eliminates the potential for actual subversion. In the words of ThreadOmar Little: Everything in the game. In 1973, Marlon Brando sent a young performer named Sacheen Small Plume to refuse his Oscar for The Godfather and give a speech on Native American rights. It was an act of calculated rudeness to the Hollywood establishment, a deliberate snub to emphasize that some things are more important than acting awards.

But the Met Gala red carpet is now an arena where people go to make statements, which inevitably robs those statements of their power. No one here is rebelling against Man. Man likes extra publicity; it helps sell over $ 35,000 worth of tickets to socialites who enjoy a thrill of revolution as long as he’s safely divorced from the threat of real falls. In 1970 Tom Wolfe used the famous term radical chic to describe a New York night hosted by Leonard and Felicia Bernstein to raise funds for the Black Panthers. (Wolfs count of the party in new York magazine included a photo of the snacks. The accompanying legend asked: Do panthers like pieces of Roquefort?) The Met Ball is now heir to this tradition, a safe space for political statements that all participants will applaud, that they really believe in it. or not. In a decade or so, the wheel will turn again, and this Met Gala will look as outdated as previous attempts at social commentary via the means of affordable clothing only at 1%. (John Gallianos High homeless collection, I’m looking at you.)

The Rapinoes handbag is a prime example of the toothless nature of activist tailoring. It was cute, sure, but it had nothing to do with his decision to back San Francisco 49ers quarterback Colin Kaepernick in take a knee before a National Women’s Football League game in 2016. This protest was courageous and powerful because viewers understood all the issues: Kaepernick had suffered enormous professional consequences for his anti-racism protest, and Rapinoe followed her lead knowing well. that she risked a similar backlash. But no one is booed, shunned or rejected by their peers for wearing an ensemble supporting a progressive cause at the Met Gala. Everyone there would probably pretend to tax the rich, for example, even if they are doing absolutely nothing to address the legislative deadlock that makes progressive tax reform politically impossible. So what’s the risk of wearing a Met Galagiving Tucker Carlson slogan outfit over palpitations to fill his airtime? For Ocasio-Cortez, it’s just a day that ends with a Y.

The most striking thing about yesterday’s Met Gala, for me, was this does not have to arrive. Award ceremonies and red carpet events have traditionally been followed by the best and least dressed lists, a seedy and finicky appeal from self-proclaimed designers of taste chuckling with schadenfreude over an exceptionally attractive woman with bad senses. sartorial led her to come out simply as a very attractive woman. A decade ago, I would have expected to see the Met Gala outfits forensically and cruelly dissected on blogs such as Go Fug Yourself and Perez Hilton, both of which have toned down their criticism since their respective heydays.

This harsher style of commentary is now out of fashion. We are more comfortable analyzing the moral choices of celebrities, their past remarks, their shapewear lines with insensitive names, their false pregnancy photos that their ill-advised decision to wear an A-line skirt when they are a bit heavy on the hips. Where the public once bullied A-listers for a bad nose job or awkward cleavage, these days we instead take a look at their political outlook and find it just as reprehensible. Body-shaming has been replaced by soul-shaming.

From this perspective, celebrity endorsement of political statements makes perfect sense. We have to talk about Something. If the Met Gala is all about sexy people in great outfits, what’s the point? Activism is now all the rage.