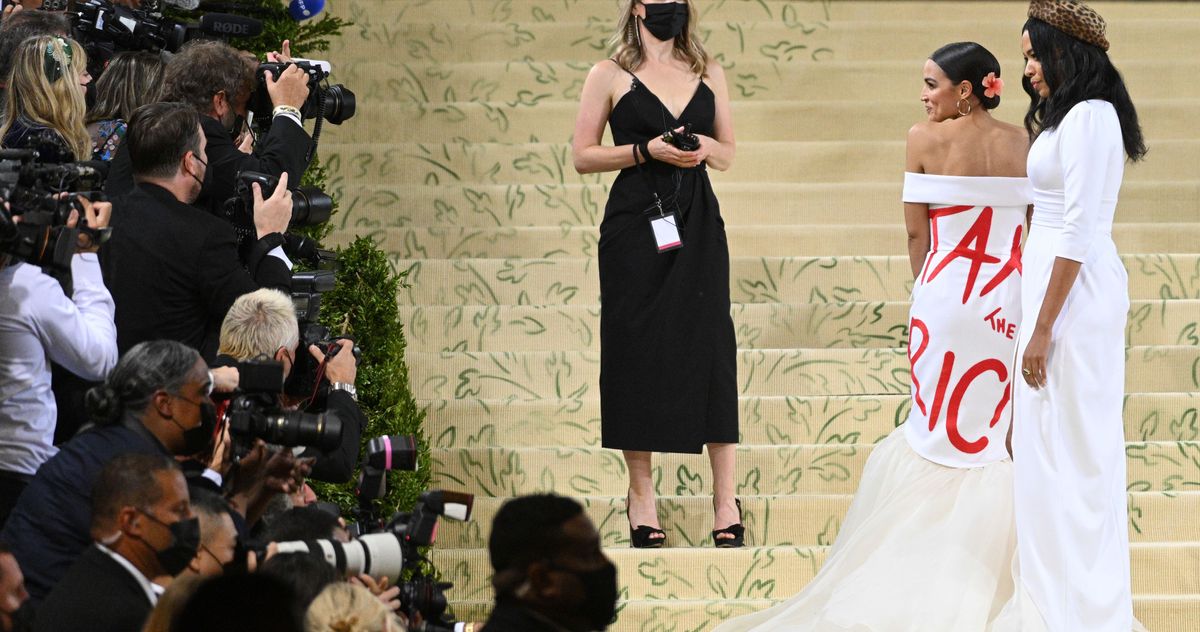 On Monday night, after Alexandria Ocasio-Cortez appeared at the Met Gala wearing a dress emblazoned with the Tax the Rich slogan, her detractors exploded in indignation. The complaint (mainly, but not exclusively, from the right) assailed the AOCs fraud, hypocrisy, and peddling empty political slogans.

But what exactly is the problem here? Should a politician who favors higher taxes on the rich avoid social engagements with them?

To the (very limited) extent to which critics have been able to express what they see as the contradiction between his beliefs and behavior, it appears to be this: AOC believes the rich are terrible and should be banned or killed, yet she mingles comfortably among them. Our radical assholes are cosplaying the revolution, complains cool-kids philosopher Ben Shapiro. Real revolutionaries eat the rich. They don’t eat cake with the rich, then declare their virtue by wearing a shirt that says Eat the Rich.

But of course, AOC is not, and does not claim to be, a true revolutionary. She is in favor of a much more egalitarian economic policy, but not of the execution of the rich. His program is not based on moral criticism of the rich, but on a rather mundane observation that the rich can bear to have less money to finance the social needs of those who need it most.

Indeed, the whole idea that the Democratic party’s justification for more progressive taxation is based on the personal moral condemnation of the rich is almost entirely a duck invented by the right. First the Conservatives accuse the Liberals of hating and wanting to punish the rich, then turn around and accuse them of hypocrisy for violating the belief they never had.

The strangest aspect of this little theatrical centerpiece of political outrage is that AOC’s stance on taxing the rich isn’t an answer we have to guess by projecting fantasies into its appearance. She is an elected official with written, measurable policy proposals, and a key player in a live debate over what is supposed to be the biggest tax increase for the rich in decades.

The glamorous AOC parties hanging out with the rich are orders of magnitude less substantial than its intention to tax their fortunes. What is really superficial is the fixation with symbolism and cultural association rather than the concrete tax transfer that is taking shape right now. It’s bizarre to see AOC being accused of being a fake class warrior in the midst of a live class war in Washington with billions of dollars at stake.

How we got to such a delusional point is worth thinking about. The cause appears to be a trope in the political commentary that identifies Democrats as the party of the rich and Republicans as the party of the working class. Millions upon millions of words have been poured out to probe the core thoughts of the Trump lumpenproletariat in their truck stops. Not a day goes by without some columnist or another attacking Democrats like The billionaires party (in that case, National exams Kevin Williamson, from Sunday). The left deplores the alienation of the Democrats vis-à-vis the people, while the right rejoices.

There is an underlying basis for this. Politics in the Western world has become increasingly polarized by education. And as education and income are correlated, it has pushed well-off voters further and further to the left while non-well-off voters have moved to the right. Of course, if you disaggregate education and income, you can see that wealth always makes you more Republican and poverty makes you more Democratic. (High-income voters without a university degree are extremely Republican constituency.) And the phenomenon is a trend, not a plateau, that is to say that there are still very many worker democrats and rich republicans.

One of the results of this trend is that Democrats have increased their cultural power. The dominance that progressive ideas have occupied in academia for decades has spread to entertainment, media, and even many businesses. The Conservatives do more than work the referees when they claim to feel marginalized. Having right-wing beliefs while living in a place like New York, Washington, or Los Angeles has become a truly alienating experience.

But changes in the makeup of the two parties’ voting bases have not altered the long-standing class orientation of their political agendas. Democrats still vote to redistribute income downward, while Republicans vote to redistribute income upward. The political media’s fixation on the marginal change in the base makeup of the two parties has caused it to lose touch with the real purpose for which they are using their power.

The class orientation of their programs on the important things they actually do with power has not changed. Democrats pass a bill the intent and effect of which would be to cause a historically significant downward transfer of resources. The upper-middle-class voters the party has attracted in greater numbers would face combined tax rates of around 60%, in the highest-taxed states. The expenses that these taxes would finance would go to people with modest incomes.

It’s certainly not the Met Gala attendees who will be using Extended Medicaid in the Red States or free community colleges. The people who dismiss such programs as unwanted or unaffordable are the conservatives who present themselves as the tribunes of the working people.

Indeed, both parties are more polarized on redistribution than any other single dynamic. Republicans will systematically abandon their stance against spending, deficits, centralized government control, but they never waver from their opposition to taxing the rich.

Notably, the recent bipartisan infrastructure bill further revealed that Republicans are not implacably opposed to taxes per se. They have repeatedly launched proposals to fund roads and bridges with regressive user fees. Democrats refused, insisting that taxes must fall exclusively on people earning $ 400,000 or more, a demand Republicans would not respect. As they tried to bridge the divide by settling on a slew of bogus funding sources, the dispute revealed how clearly the partisan divide is articulated by class: Republicans alone would accept regressive taxes, while Democrats alone accept progressive taxes.

Despite Donald Trump’s downgraded behavior and his political appeal to non-graduate voters, neither his administration nor his political allies have ever challenged the plutocratic distribution of the party. His administration’s domestic politics revolved around a giant tax cut for the rich and business owners, and failed efforts to exclude middle-class people from their health insurance to fund another tax cut for the rich.

The Republican Party has done a lot of talk about populism, but nothing looks like a serious challenge to its fanatical opposition to redistribution. If JD Vance is elected to the Senate, he will vote for the next big capital gains or inheritance tax cuts the Republicans propose to him.

Even occasional familiarity with the contours of the ongoing political struggle would dispel the vulgar Marxist assumption that growing support for the Democratic Party among wealthy voters would mean a rightward shift in its economic program. It’s downright odd to be going through a polarized struggle over whether hundreds of billions of dollars will remain in the hands of the rich, or instead be used to fund benefits for the oppressed without the larger debate really taking note.

One would think that the class contours of the debate at Joe Bidens in Washington would be obvious enough that people clinging to their image of fanciful Democrats and low-end Republicans could no longer ignore it. But the human ability to ignore the obvious is strong enough that many of us fail to see who wants to tax the rich even when they look at us in blazing red letters.

Get the latest Jonathan Chait news delivered to your inbox.


By submitting your email, you agree to our terms and privacy notice and to receive email correspondence from us.