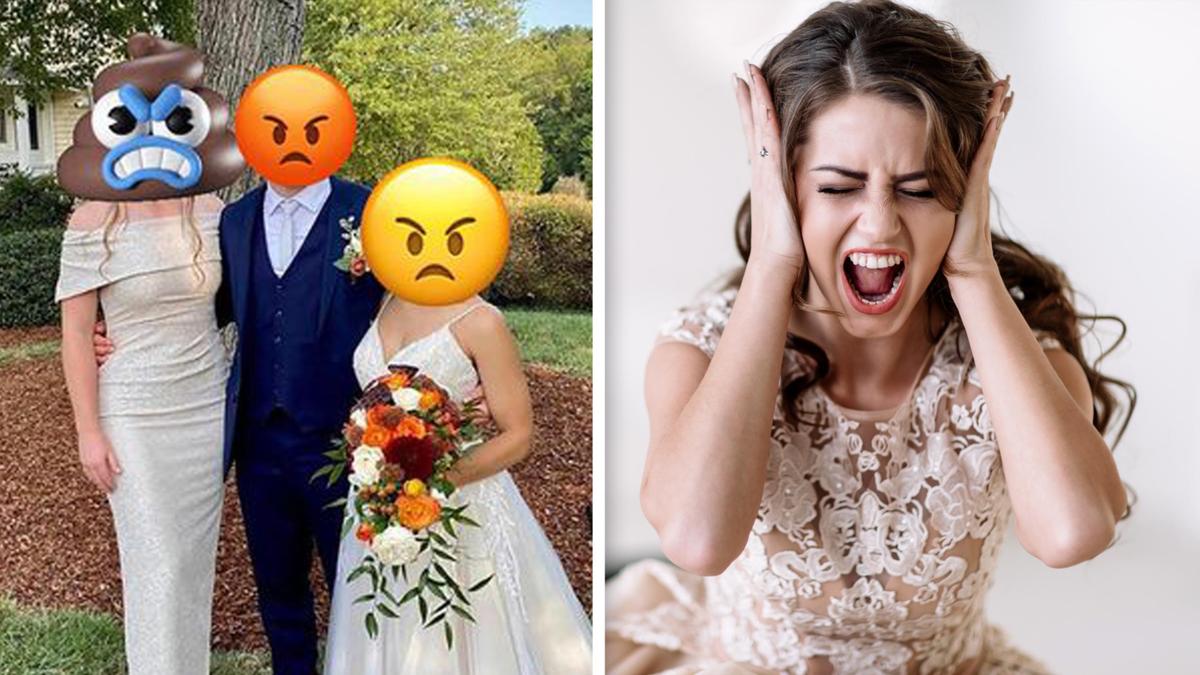 An unleashed bride has flared up online after her sister-in-law threatened to steal the show on her big day with a dress a little lighter than mine.

The angry bride said her husband’s brother made three missteps; One wore a dress that made it difficult in the photos to tell who the bride actually was, the second painted social media with pictures of the wedding without permission and the third refused to take them off.

My sister-in-law wore a slightly lighter dress than mine at our wedding, posted my wedding dress on all of her social media, then ignored us when we asked her to take it off, the bride shared in a post now deleted on Reddit.

I’m the one with the bouquet. My dress was champagne color.

My sister-in-law wore a dress that was lighter than mine. It’s a little hard to tell the difference from the photos.

The sisters’ fashion appeal was not well received by the groom, who even considered the drastic step of driving her out of the ceremony.

My husband is in the middle, the bride said, after posting a picture of her big day.

He was going to chase her away, but I asked him not to.

She loves the attention, and I didn’t want our day to be overshadowed by her.

He did his best to keep me away from his whole family and he completely ignored her before and after the photos were taken. He refused to speak or look in his general direction.

It was one of the three photos we had with her. He grimaced in each of them.

Her parents took this photo because the photographer was completely avoiding her.

DRAMA ON THE WEDDING DRESS: THE STEP-MOTHER THREATS THE HIGH-END BRIDE WITH A WHITE DRESS

MUCH TOO HOT FOR A WEDDING: GUESTS DRESS UP WHETHER SHE RAISED THE BRIDE

The bride said the sartorial drama was only half the problem, with the sister causing even more disagreement between the two by posting a gallery of wedding day photos on social media without permission before the newlyweds could even have a chance. share them with their family and loved ones.

She also refused requests to withdraw them.

After the wedding, she posted a photo of me in my wedding dress on her social media, the bride said.

We had asked people not to do this because we first wanted to be able to share our photos with our friends and family. We also expressed it. Everyone listened to her except her.

She chose not to listen and ignored her brother when he asked her to remove him.

Overall, whatever she did, she knew she wasn’t supposed to. She went out of her way to be disrespectful. Hence the problems I have with her.

Shared with the r / weddingshaming subreddit, the post drew hundreds of comments, many of which support the bride.

(It’s) super strange that she dresses like a bride at her brother’s wedding, one popular comment read, while another said her choice of clothes was okay.

A third person described it as confusing.

This is the one time you should be wearing ANY OTHER COLOR, they said.

Can’t we give someone a day when we follow this rule? Disconcerting.

Vivaldi says no to the Google Idle API to improve capture, download panels and sync.