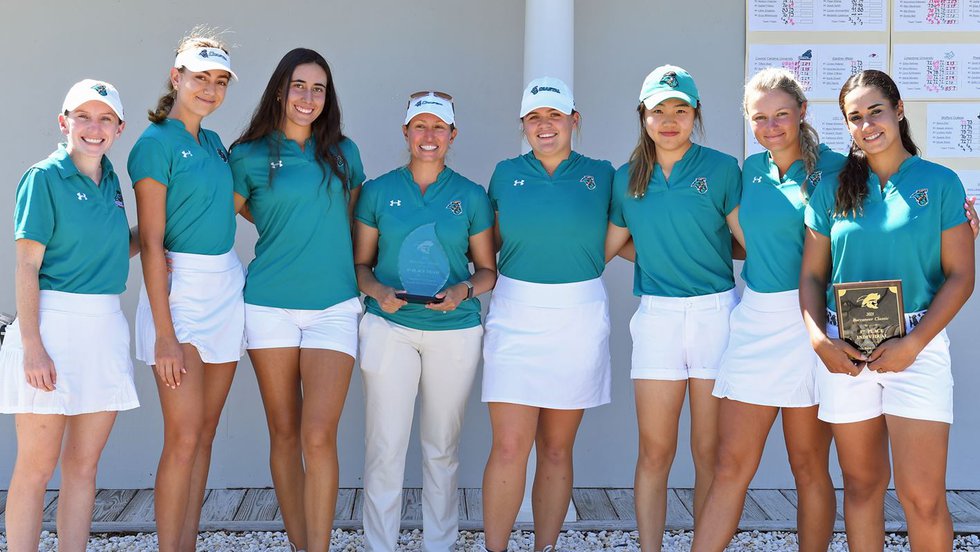 The roster’s five Chanticleers shot below par on the final day of play on Tuesday, while three of the five finished in the top 10 in the tournament standings.

Arafi, who set a new individual school record on 36 holes of 132.12 under par Monday with rounds of 68 and 64, shot a 69.3 under par in the final round of play on Tuesday to shoot away for the individual victory with a combined score of 201, 15 under par.

The previous record for the lowest individual score on 54 holes was a 205, 11 under par, by Nicole Abelar last spring at the River Landing Classic in North Carolina.

She also dominated the entire tournament with 18 birdies to accompany 33 pars on her 54 holes of play.

Like CCU’s second round 273, Chants’ third round 277, 11 below par, was the lowest team round of the day. The 277 round marks the third-lowest 18-hole team score in CCU history behind second round 273 yesterday and a 276.12 under par last year at the River Landing Classic.

Her senior colleague Caitlin Evans-Brand closed the tournament with a final round of 70, 2 under par, to place third overall with a score of 209 on 54 holes, 7 under par, with rounds of 71, 68 and 70.

Evans-Brand led the tournament with a 3.79, -5 par-4 average over all three rounds of play, and finished the event with 15 birdies and 32 pars in total. His score of 209 on 54 holes is the second lowest in his CCU career.

Freshman Sara Sarrion shot a career-best 69.3 under par on Tuesday to tie for ninth with her 54 hole score of 215.1 under par with rounds of 76.70 and 69. The freshman Chant dominated the entire tournament with 42 pars and seven birdies over the two days of play.

Just one shot from Sarrion was compatriot Chant Sophia Carlsen, as carded junior rounds of 74, 71 and 71, tied for 12th overall at 216, even by. In the last round of play, Carlsen recorded three birdies and 13 pars, for a total of 38 pars and eight birdies in his three rounds of play.

To complete the Chants lineup, junior Jenjira Jinangkul, in a red shirt, also shot under par with a round of 69.3 under par on Tuesday. Combined with his rounds of 78 and 77 on Monday, Jinangkul finished tied for 31st with a score of 224, +8. In his last 18 holes, Jinangkul was tied for third of the day with five birdies and 11 pars.

The Chanticleers will close the fall 2021 program at the Club at Olde Stone Intercollegiate hosted by Louisville on October 25-26 in Bowling Green, Ky.

Boris Johnson news: MPs to vote on online safety bill ahead of Christmas as Brokenshire remembers