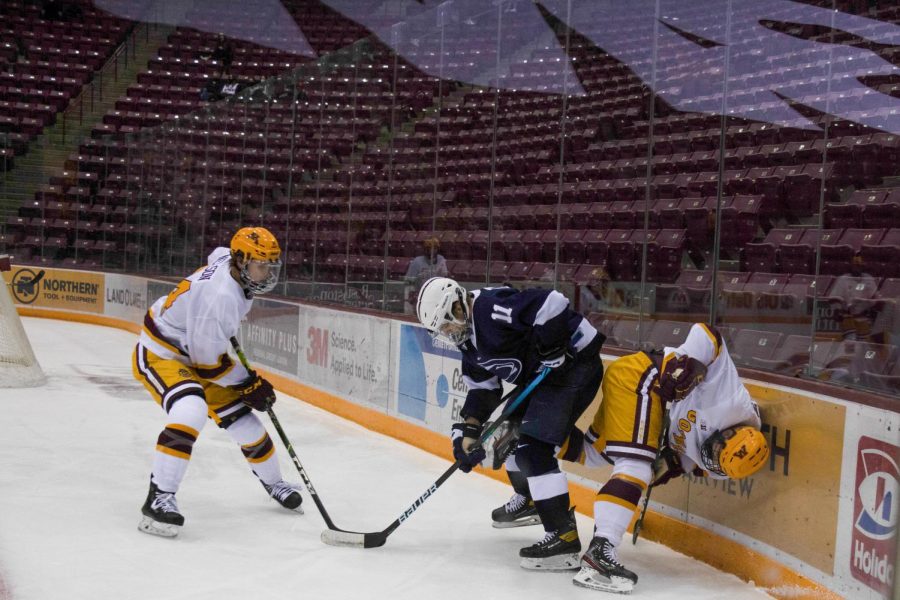 The Gophers men’s hockey team (7-6) continued their first game in a streak on Friday night as they lost their sixth game this season in a 5-3 loss to Penn State in residence.

It was a disappointing loss, said Gophers head coach Bob Motzko. We played an away game and we have now seen it three Fridays in a row.

Penn States Ryan Kirwan opened the scoring on a forward receiving shot just outside the crease to give the Nittany Lions a 1-0 lead with 13:19 seconds left in the first.

As the period progressed, the Gophers began to find their place and settle down. With just 32.9 seconds left in the first, Matthew Knies continued his recent hot streak by burying the puck in the net after following his own rebound to tie the game. at 1-1 in the first intermission.

The umpires gave Minnesota their first advantage of the night just minutes into the second, and their power play unit quickly converted. On the goal line, Knies turned and landed a forehand at the net. Junior Jaxon Nelson was there to clean the free puck up front to give the Gophers a 2-1 lead at 3:32 seconds into the period.

However, 40 seconds later, junior Ryan Johnson was assessed a double failure penalty. Suddenly, Penn State hit back with a power-play goal from Connor MacEachern to tie the game at 2-2 with 15:03 minutes left in the period.

The Gophers quickly began to push back as junior Bryce Brodzinski dazzled his way from the neutral zone to the attacking zone. However, Penn States Ben Copeland hooked it up and Minnesota went to their second power play of the night.

On their second power play, the Gophers dominated possession but couldn’t find the back of the net. Then one of the worst possible scenarios happened.

As the men’s advantage dwindled, senior Sammy Walker fired a wide shot and the puck rang around the board to the Nittany Lions’ blue line as Copeland came out of the penalty area. He recovered the free puck, worked his way to a breakaway, and threw a shot into the upper left corner of the net to give Penn State a 3-2 lead halfway through the second.
Much of the second period after Penn States’ third goal was a back and forth. Then Nittany Lions Christian Sarlo dealt a dangerous blow to senior Blake McLaughlin, so the Gophers went to their third power play of the night with 2:22 seconds left. They performed for the second time.

Again, it was Knies who created pieces for Minnesota. He failed while picking up the puck in the left corner, shot the puck towards his backhand and fired a shot on goal. Penn States goaltender Oskar Autio allowed another rebound. Then, who other than Nelson to collect the small change in front to tie the game at 3-3 before the second intermission.

At the start of the final 20 minutes of play, the referees gave junior Matt Staudacher a double check. Quickly, Penn State took advantage of the call as Sarlo took a shot from the top of the left circle to score the Nittany Lions’ second power-play goal of the night and give them a 4-3 lead at 2:10 seconds. of the third.

It was a horrible call for Staudacher, Motzko said. It was bad. In a 3-3 hockey game, that’s as bad a call as you are going to be in hockey.

Penn States Chase McLane would add another goal just 58 seconds later to extend his lead to 5-3 that remained for the remainder of the game.

The Gophers had a 5-3 advantage for 31 seconds just minutes before halfway in the third, but couldn’t convert, and their power play ended 2/5 on the evening. Minnesota dominated Penn State 35-26. However, their generally stingy penalty allowed two goals in two attempts.

There are parts of hockey where you need to have detailed structure in your game, Motzko said. We have it offensively, but when it comes to the other side right now, we’re below par.

In the loss, Nelson recorded his first multi-goal career game, while Knies posted his first career three-point performance (one goal, two assists) as he now has seven points in his last four. matches. Junior Jonny Sorenson also left the game in the third period with an apparent injury.

The Gophers will look to bounce back and divide the series on Saturday night when they face Penn State at 8 p.m. at 3M Arena in Mariucci.

We just have to come out and play the right way, said Nelson. They just play so fast. They go up and down the rink and throw pucks all over the place, so we have to stay in the middle.