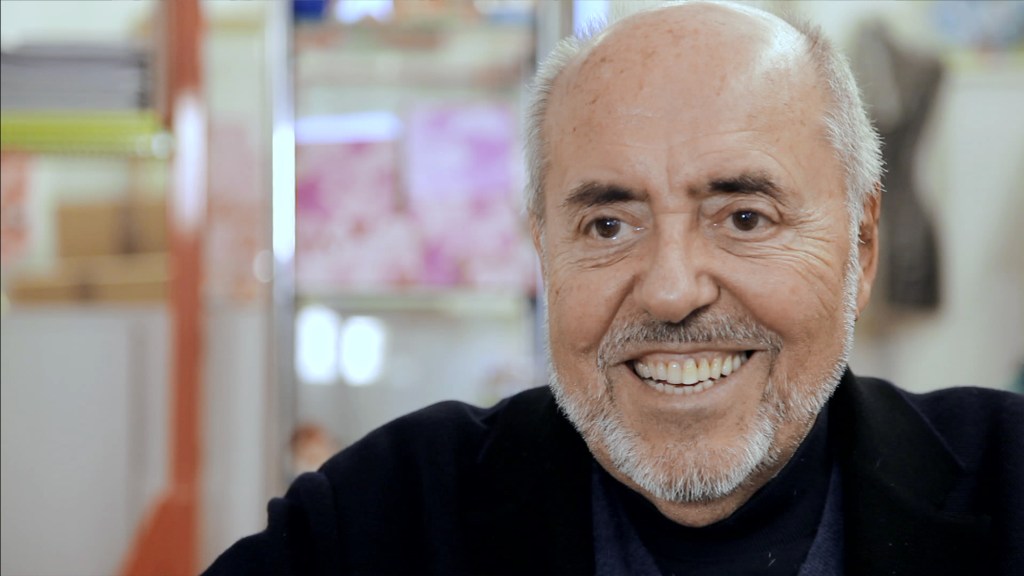 MILAN — Fear: A concept as old as the world that inevitably influences the behavior of humans and animals.

Each person’s relationship with feeling is personal and, given the current context, increasingly an object of self-exploration and research into coping mechanisms.

While many search social media for motivational quotes or take inspiration from the gestures of their favorite athletes, a little encouragement may also come from the words and the Technicolor world portrayed in “Free Spirit,” a documentary about Elio Fiorucci that will be celebrated with a special screening on Monday, as part of the eighth edition of the Fashion Film Festival Milano event which opens on Friday.

“The end of useless fears, [is] the beginning of life,” is one of the mottos the visionary designer, who died in July 2015 at the age of 80, shares with his signature smile in the hour-long film.

“That’s one of his biggest lessons, for me,” said Andrea Servi who, along with Swan Bergman, stood on the other end of the camera as both acted as writers and directors. of this project, which began in 2008. “The way he thought about the future, always with creativity and imagination and not with fear like today. He unmasked fears, chased them away with his work and his colorful universe. And you can see that in this documentary,” Servi said, adding that the goal of the film is to give viewers the same energy to act and react without fear.

Yet nostalgia could also be triggered: rather than simply celebrating Fiorucci’s life and career, the film intends to recount key episodes and decades of change and explosive creativity through the filter of the creator and the memories of those around him. .

The first part of the documentary presents a series of interviews divided by subject and historical period – ranging from the 60s to the end of the 80s – and is supported by archival footage, while in the second part a more intimate portrait de Fiorucci is shown, as he freely shares his thoughts and memories.

In addition to the designer, interviewees range from Vivienne Westwood, who shares glimpses of how she first heard of Fiorucci, to collaborators such as photographer Oliviero Toscani; stylist and artist Maripol, who doubled as artistic director of Fiorucci’s famed store in New York; the designer and scenographer Franco Marabelli, who was creative director of the brand’s boutiques; curator Daniela Morera and former Fiorucci sales assistant Biba Acquati, among others.

These characters populated the vast and eccentric world of the designer, who was the father of pioneering ideas, ranging from the creation of fashion denim and the introduction of logos to revolutionary retail concepts.

It was he who brought the energy and sense of freedom from Swinging London to Italy in the 1960s, when he opened his legendary emporium in the center of San Babila in Milan, which anticipated the modern definition of a concept store.

A testing ground, the place was a chaotic but bewitching bazaar of objects of all kinds, references and iconography, presented in a flashy, colorful and fun way that clashed with the context of the 1970s, when terrorism and political tensions loomed over Italy. .

Spontaneous, generous and open-minded, Fiorucci also became a patron of young artists, architects, graphic designers and performers, including Keith Haring who took over the store and covered it entirely in his graffiti art during an event in direct opened to the public in 1983. .

The documentary also vividly traces how, after the launch of the New York flagship in 1976, Fiorucci became part of and fueled the city’s vibrant scene at the time, with Andy Warhol, Truman Capote and Jean-Michel Basquiat being among the personalities who gravitated to the location, which was commonly described as a “Studio 54 by day” for its lively atmosphere. For example, Warhol chose the store to launch its Interview magazine with an event and signing while Donna Jordan and Pat Cleveland modeled for a live storefront concept, among others. As for the real Studio 54, Fiorucci organized a party there to celebrate the brand’s 15th anniversary and invited a young Madonna – at the time a DJ – to spin the records, as he recalls in “Free Spirit”.

The documentary was quietly released in 2017. Inclusion at the Fashion Film Festival Milano will mark its true launch, as the makers have said the film will have a wider rollout starting in the spring.

The screening will take place digitally on the MyMovies platform, with 500 tickets available for the event. This format was originally meant to accompany a physical event held at the Milan Triennale museum, but this was postponed to Milan Fashion Week next month due to the rise of the Omicron variant in the country.

The choice of location was not accidental, as the film project was born in the clean rooms of the place. While visiting an exhibition devoted to the 70s, Servi and Bergman entered a pavilion dedicated to Fiorucci which highlighted his artistic connections and cultural influence.

“We were amazed: we discovered a lot of things about him and we said to ourselves that many Italians didn’t really know everything he had done and that it deserved a film. So the same day we found a contact and called his press office to talk about this idea, and they immediately passed the call to Fiorucci himself, which was pretty amazing,” Bergman recalls. “He told us he was extremely honored. I mean, him? Honored by us? We were shocked,” Servi said.

Everything quickly ramped up and production went smoothly with no plans or schedules. “It was anarchic and we wanted to do something that was in tune with the spirit of those years and incredibly authentic, so it was very rock ‘n’ roll. We didn’t cook up any questions, we just went with the flow and had so much fun throughout the process,” Bergman said, noting that the images reflected that raw, not glossy style.

“He never made a date because he thought setting a date creates performance expectations,” he continued. “Furthermore, he shared his agenda with us, his entire heritage of people he knew, without any kind of jealousy,” Bergman added, noting how this attitude influenced his personal and professional journey in later years. “It was natural for him, and if you think about it, his stores were not intended to sell products but were meeting points.”

With its unprecedented mix of elements that tickled the public imagination, the San Babila store became the epicenter of a cultural revolution, as it introduced and promoted a language, attitude and lifestyle that the younger generations of the time were waiting. A community of young consumers gathered around the location because they could identify with the energetic young staff, the choice of music and the cosmopolitan vibe.

A Bologna-based music video director, Bergman traveled to Milan frequently for work and always stopped by the store for inspiration. “I used to go there to stimulate my lateral thinking to create a story out of an unusual object – and there were a lot of them – rather than being academic in creating something out of the lyrics. of a song. This place pushed you to use the imagination and I believe that many of the videos I created were unconsciously coming from the world of Fiorucci, long before working on this documentary,” Bergman said.

Asked about the hardest part of making “Free Spirit,” the directors pointed to Fiorucci’s death during the final stages of production. “Along with the grief of losing a friend, there was the great task of creating a common language and meaning from the images we had,” Servi said.

While the documentary turned out to be a collection of first-hand memories, Servi revealed that the original plan was to make a Netflix Halston-style miniseries. The writers have stated that there is already a full script which was developed under Fiorucci’s guidance which was ultimately shelved as they preferred to start collecting information from interviews instead.

“But the story is still there, we have all the ideas, even in terms of casting, we just need a few million to produce it,” joked Servi, who, more seriously, said the project was on the table. . with a few companies and is under discussion.

On top of that, the duo are busy on other fronts — including two more docu-films and a movie — as well as finding another project that would replicate “Free Spirit” and its intersection of fashion-related themes. , culture and society.

“But mavericks are hard to find these days. There’s no one like Elio now,” Bergman concluded.

The golden age of computer monitors