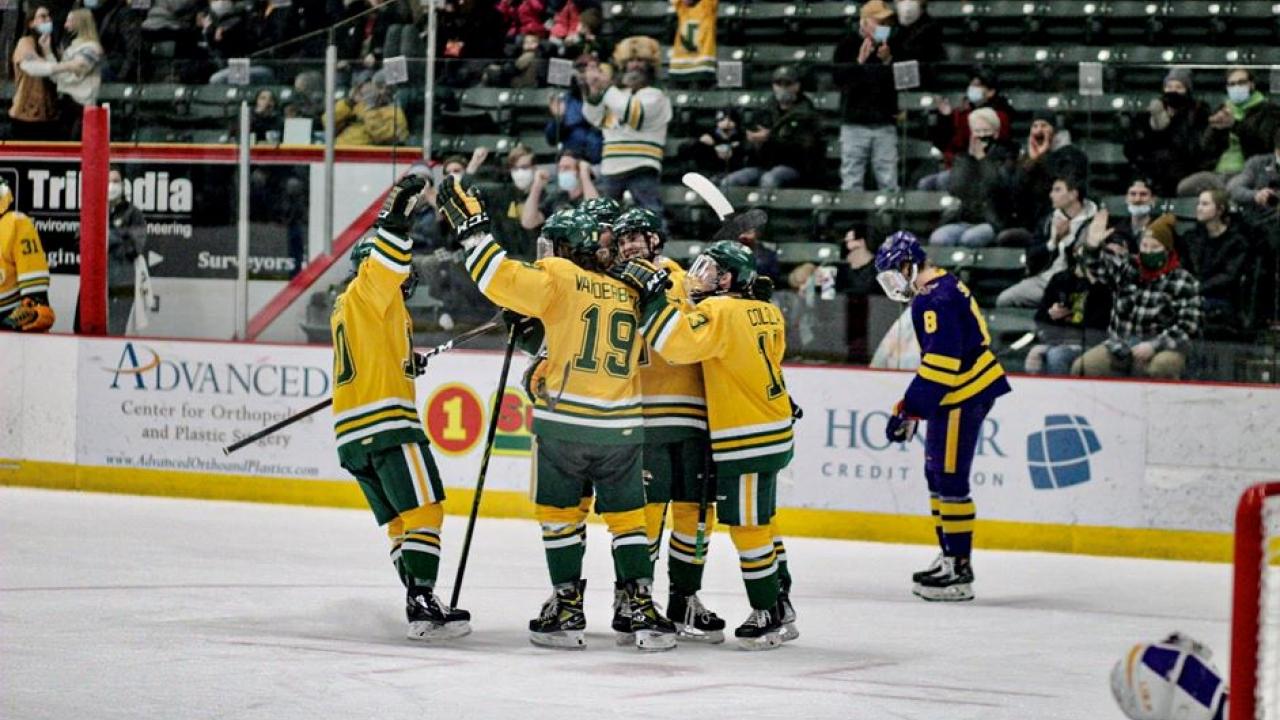 Minnesota State would record the first goal of the game with less than two minutes left in the opening period, when Julian Napravnik fired one from the glove side on the Mavericks’ second power play. Smith and Furry assisted on goal.

The Wildcats had the first five shots on goal of the game, but the Mavericks would increase the pressure and outrun the ‘Cats 12-8 in the first 20 minutes. Rico DiMatteo stopped 11 shots in the period.

The Wildcats were 0-1 on man advantage in the first while the visiting Mavericks converted on one of two opportunities they had.

The ‘Cats would open the second period again shorthanded, but successfully fended off another advantage opportunity from Maverick.

With 12 minutes to play in the 2nd period, André Ghantous beat the goalkeeper and scored his 7th score of the season. Mack Byers would get credit for the assist.

The Wildcats would return to the penalty spot midway through the period, but NMU’s special teams once again scored a big hit, killing another dangerous Maverick power play.

Despite spending a lot of time with a man down, the ‘Cats took a 2-1 lead on a breakout opportunity when Ben Newhouse wiggled the string on a wrist shot. David Keefer and Hank Crone would get the assists.

Just over a minute later, AJ Vanderbeck showed patience on a breakaway, worked it behind the net and scored his 17th of the season. This tied him atop the nation’s scoring charts. Mikey Colella recorded the assistant.

The Wildcats would take a 3-1 lead in the 2nd intermission. The Mavericks led in shots on goal 19-15 after two periods of play.

Northern would be called for his fifth penalty two minutes into the third period, but the Cats’ penalty elimination unit was again important, keeping the Mavericks out of the net.

Minnesota State would make it a 3-2 game with 10:52 left in the third. Connor Gregga would get the Mavericks goal, with assists from Livingstone and Krajnik.

The Wildcats would get their second power play of the game with 9:27 left in the period, but Mankato managed to hold a one-goal fight.

The Mavericks pulled their goalie to close out the third period and the Wildcats pushed the extra forward away, scoring an empty net in the dying seconds of Andre Ghantous, his 8th goal of the year.

Both teams will be back tomorrow night (January 15) from the Berry Events Center. The puck drop is scheduled for 6:37 p.m.