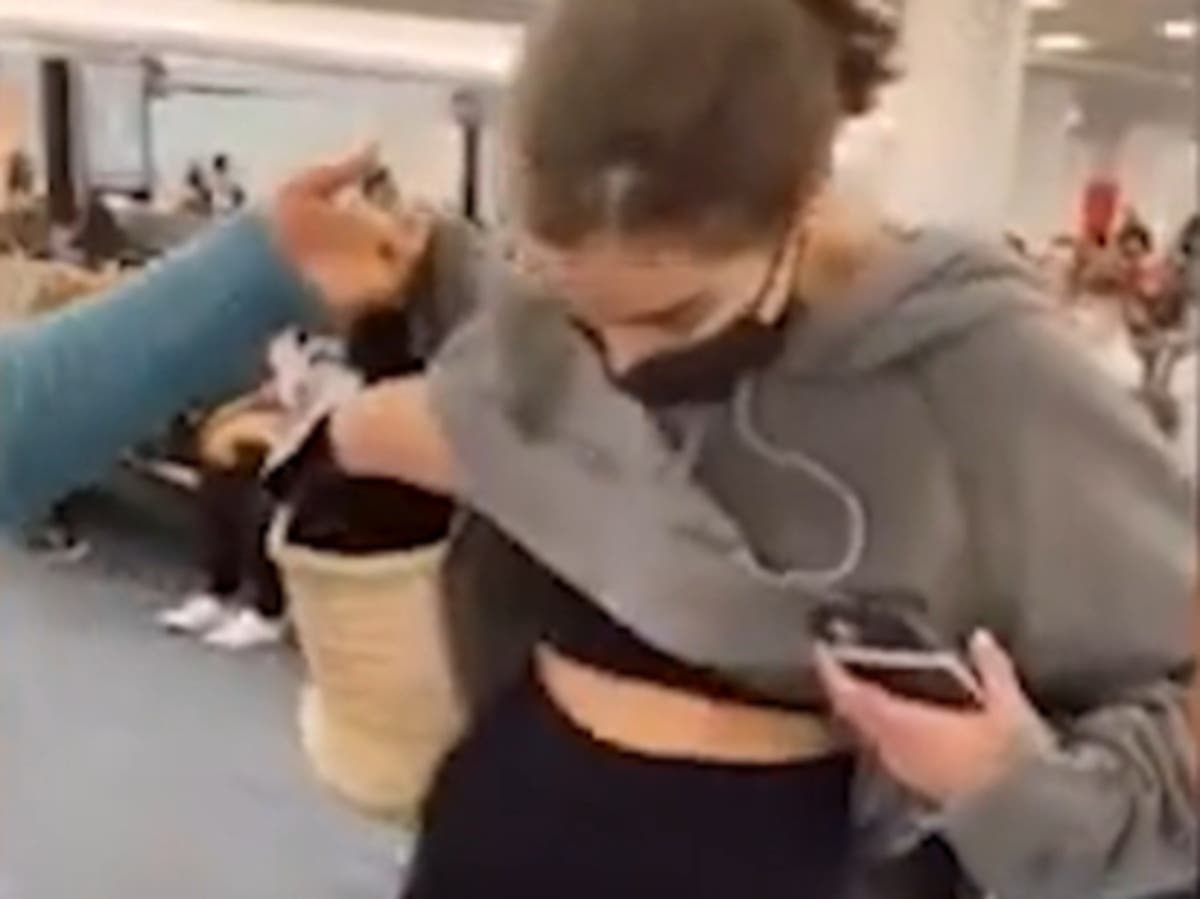 YesWe are off to catch a flight for your long-awaited beach vacation. You’ve paid for the hotel, bought the SPF in bulk, and created an in-flight playlist to die for. The last thing on your mind, I bet, is how modest your outfit is.

Yet in recent years there have been a series of cases where airline staff deemed the clothing of passengers – usually a woman – inappropriate, leading them to either be kicked off their flight or forced to cover up.

On Saturday, a former Miss Universe, Olivia Culpo, would have been ordered to cover herself by the staff of American Airlines, under penalty of not being able to board her flight to Cabo San Lucas in Mexico.

The model wore a pair of tight black shorts with a crop top, which showed off her midriff, and a long black cardigan.

Ms Culpos’ sister Aurora posted a video on Instagram after the incident, explaining that her sister was called to the airline office at the door so staff could tell her she needed to put on a blouse, otherwise she couldn’t get on the plane.

Tell me, ain’t it so fucked up? wondered Aurora Culpo.

A second video showed the sisters talking to another passenger who was wearing a crop top very similar to Ms Culpos, but who was not singled out by the airline.

And this is not the first time this has happened. In September 2021, an American woman accused Alaska Airlines of harassment after she was kicked off a flight for wearing an outfit the flight attendant deemed inappropriate.

Ray Lin Howard, a plus-size rapper and stylist from Fairbanks, Alaska, who goes by the name Fat Trophy Wife, shared her experience in a TikTok video that has been viewed over nine million times.

UK-based airlines are not off the hook either. In March 2019, passenger Emily OConnor tweeted a thread saying the hangar had been left shaking and upset after the flight crew of a Thomas Cook flight from Birmingham to Tenerife threatened to kick her out of the plane at unless she covers up her crop top and high waisted pants combo.

OConor noted that no airport staff had commented on her outfit and when she asked, no other passengers said they had a problem with her. And yet, when she boarded the plane, she claimed that airline staff humiliated her by threatening to take her luggage off the plane unless she covered up, and by making announcements on the tannoy about the situation.

So what are the rules about what we wear on a plane?

Confusingly, every airline in the world can determine its own dress code, and most are either vague or non-existent. Some – mostly US carriers – have a set of conditions of carriage that includes dress code requirements for passengers, but many do not.

For example, Alaska Airlines policy states: The requirement is simply a neat and neat appearance. Soiled or ragged clothing and bare feet are never acceptable. You must exercise good judgment, but Customer Service Agents will have final authority to refuse travel in the event of inappropriate dress or appearance.

America Airlines Passenger Responsibility Statement states: To ensure a safe environment for everyone, you must dress appropriately; bare feet or offensive clothing is not permitted. There is no clarification on what constitutes offensive clothing, or who decides this definition.

Meanwhile, Thomas Cook does not present any type of dress code on its website.

This essentially means that any cabin crew member could take offense to any outfit on a whim, with little advance guidance for airline passengers on what to avoid.

Katherine Allen from Hugh James, a law firm that handles complaints from individual consumers among other things, says it is rare for UK airlines to have dress codes in place.

BA and Virgin reserve the right to refuse to carry you in certain circumstances, but if you look at the circumstances listed they say nothing about dress code.

They have information on denied boarding if you or your luggage affects the comfort of other passengers, she adds, pointing out that this would be difficult to apply to clothing.

Most cases where airlines have objected to clothing have been in hot destinations or departure points, from which some people prefer to wear beach-ready or lightweight clothing. It’s understandable – if anything, more of us have been caught doing things the other way round, arriving in tropical climes with suddenly stuffy jeans and sweaters.

In June 2019, Houston-based doctor Tisha Rowe had a confrontation with an American Airlines staff member on a trip from sultry Jamaica to equally hot Miami, when a flight attendant told her. said she couldn’t fly without covering her strapless jumpsuit. With no bulkier clothes to hand, Rowe was forced to cover herself in an air blanket to board.

I like to be comfortable when I travel, a shocked Rowe told the Washington Postat the time. Her attire, she said, was not significantly different from that of other passengers I’ve seen on planes, as she demonstrated by posting a photo of the typical holiday look on Twitter.

It should be noted that, like Ray Lin Howard, Dr. Rowe is a woman of color in her own right. Commenters on her tweet insisted a thin white woman in the same outfit was unlikely to be questioned by cabin crew, while her lawyer, Geoffrey Berg, called the incident an attack. sexist and racist.

I felt like I was being discriminated against because I was a fat, tattooed, mixed-race woman, which left me full of emotions like anger, disappointment, helplessness, humiliation and confusion, Howard told reporters after meeting with Alaska Airlines. .

Dr Rowe advised those challenged over their flight attire to seek legal redress.

I think they should take legal action. Until airlines treat all passengers fairly and put clear dress codes in writing, they should be held accountable for the mental anguish they cause through their callous behavior, she said. The Independent.

She says American Airlines offered her a settlement, but she declined it.

The difficulty for claimants dealing with airlines that deny them boarding, Allen says, is that any payment from the airlines is often worth less than what you would spend to instruct a lawyer.

I always advise people not to ask a law firm if you are going to end up spending more in fees than you would get in damages. Were always happy to give advice, but often people don’t want to pursue these cases.

travel specialist Rob Staines, who worked as a cabin crew for many years, says: In my experience working for several airlines, crews are not told to watch out for inappropriately dressed passengers.

He said The Independent that in 17 years of working for many carriers, he had never seen anything like the cases described above.

Crew can be prompted to take action if someone is wearing overtly sexual clothing or displaying offensive language or imagery, Staines says, but will only take action if other passengers point out a problem.

Lawyer Katherine Allen agrees this is an unlikely scenario in Europe.

I think that’s unlikely here because we have denied boarding regulations in the UK and Europe so if you’ve been denied boarding and re-routed on another flight, you may be entitled to compensation.

So British and European airlines don’t want to deny boarding because they don’t want to pay compensation. It’s European legislation but it’s still in place in the UK, and it’s here to stay for a while.

The United States, she says, does not have such legislation – hence the willingness of airline staff to deal with more passengers.

From a practical standpoint, I would say check the terms and conditions before you fly, she says.

If there’s something about the dress code and you’re not sure what you’re wearing is compliant, pack a jacket or sweatpants in your carry-on so you can put them on.

Allen feels this is an outdated policy that could be seen as discriminatory against women.

Rob Staines agrees: Most airlines actively encourage crew to treat all passengers as individuals and to reserve judgment on their personal appearance.

After all, he says: Often the most laid-back passenger is the one seated in a premium cabin, which brings in the most revenue.