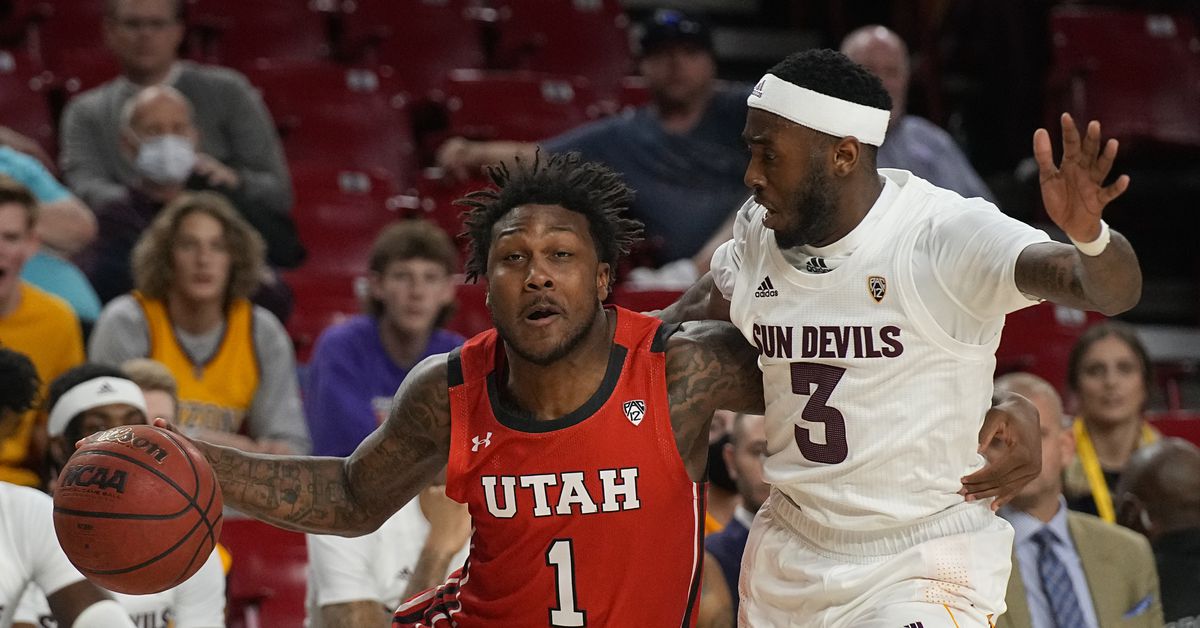 When you have a margin for error as slim as this University of Utah men’s basketball team this season in new coach Craig Smiths’ inaugural year on the hill, you have to do all the little things correctly to claim Pac-12 victories.

That didn’t happen Monday afternoon in front of 6,482 fans at Desert Financial Arena in Tempe, Arizona, and as a result, the Runnin Utes lost a heartbreaking 64-62 to one of the other teams in the league, the Arizona State Sun Devils.

Utah (8-10, 1-7) suffered its sixth straight loss when ASU Jalen Graham hit a floater in the lane with four seconds left to break a tie in the perky-jerky slugfest that never saw either of the struggling teams lead by more than six points.

It’s really hard to win in the Pac-12. Our margin of error is relatively slim, but we gave ourselves a chance tonight. We just couldn’t pull it off. Utah basketball coach Craig Smith.

Outside of the timeouts, the Runnin Utes ran downfield after Graham’s fifth field goal, but guard David Jenkins’ desperation attempt was deflected by Jay Heath. Arizona State, which was unable to host the Utes last Thursday as scheduled due to COVID-19 issues in the program, improved to 6-9 overall, 2-3 in the game Pac-12, winning the makeup match.

It’s really tough to win in the Pac-12, Smith said. Our margin of error is relatively slim, but we gave ourselves a chance tonight. We just couldn’t pull it off.

Utah played its third straight game without 7-footer Branden Carlson, out for likely another week after undergoing an appendectomy on Jan. 8, and his presence was sorely missed, especially on that final possession of the KNEW.

David Jenkins Jr., playing his best game in some time, fired a shot with 26 seconds left to tie the game at 62-62. The UNLV transfer led the Utes with 14 points, while Rollie Worster wearing No. 40 because his No. 25 jersey was ripped in the first half of the physical game added 13 and Dusan Mahorcic added 12.

After a timeout, Graham tossed the ball over the Utah 6-10 Mahorcic about eight feet.

Obviously we were a bit undersized at the four and five, giving up 36 points in the paint, and that’s a tough thing to get over, Smith said. . (Graham) hit that little beat floater. He’s just shooting at us, so you gotta give them credit. They made a few plays on the stretch.

The Sun Devils have scored on their last four possessions and seven of their last nine. The 6-9 Graham sandwiched a dunk and a sweeping hook around Marreon Jacksons 3-pointer, then added the game-winner in the final two minutes and 20 seconds.

Obviously, we’re missing Branden on both ends of the floor. He’s a great player, Worster said. We could have made a game, or defended it better. But I wouldn’t say that’s our mindset. I think we have the guys needed to win. But yeah, we miss Branden for sure.

Smith said he would be surprised if Utah’s leading scorer Carlson returns this week when the Utes host UCLA on Thursday and USC on Saturday, but hasn’t been told one way or another. another by Utah’s head athletic trainer.

As Smith and Worster mentioned, that wouldn’t have happened to Graham’s late heroics if the Utes had done some of the little things like boxing on missed free throws better.

Twice in the final seven minutes, the Sun Devils scored after missing the front of the one-on-one, baskets that were huge in what was mostly a one-possession game in the second half.

Yes, they are huge. They end up, towards the end of the game, adding up, Worster said. And when you give up, play like that, or give extra second chances, it hurts. They capitalized on games like that and we just have to learn from them and keep improving as a team.

Utah was also the benefactor on offensive rebounds, like the moment Worster hit a 3-pointer to give the Utes a 53-51 lead with 5:15 remaining. On Utah’s next possession, Jenkins Jr. banked a 3-pointer, and it looked like it could be Utah’s day.

A few calls didn’t go to Utah at the critical time, calls that were briefly lamented by Smith in his postgame comments.

Jenkins was whistled for kicking as he attempted a 3-pointer with just under four minutes left, and Mahorcic was hit with an offensive foul while scoring a lay-up because officials judged that he cleared with his left hand.

Mahorcic definitely, probably, had 30, 40 pounds on the guy, and I thought he made a great move to get up five, and it was unfortunate we had the offensive foul, Smith said.

If Arizona State had lost, we would have deplored horrible free throw shooting. The Sun Devils made just three of 12 giveaways, while Utah was 17 of 20 from the line.

Smith described a grim Utes locker room after the loss, but said no one was losing their minds as the losses mounted. Utah has not lost six consecutive games since its first season (2011-12) in the Pac-12, when it lost some eight games.

Obviously, everyone hates losing. It’s a tough loss, especially so close. We had every opportunity. We did a lot of good things late, but we ended up (losing), Worster said. We didn’t have any late saves, we didn’t have any free throws in the second half. It was a tough pill to swallow, but we have to keep going.

Especially when there is no margin for error.