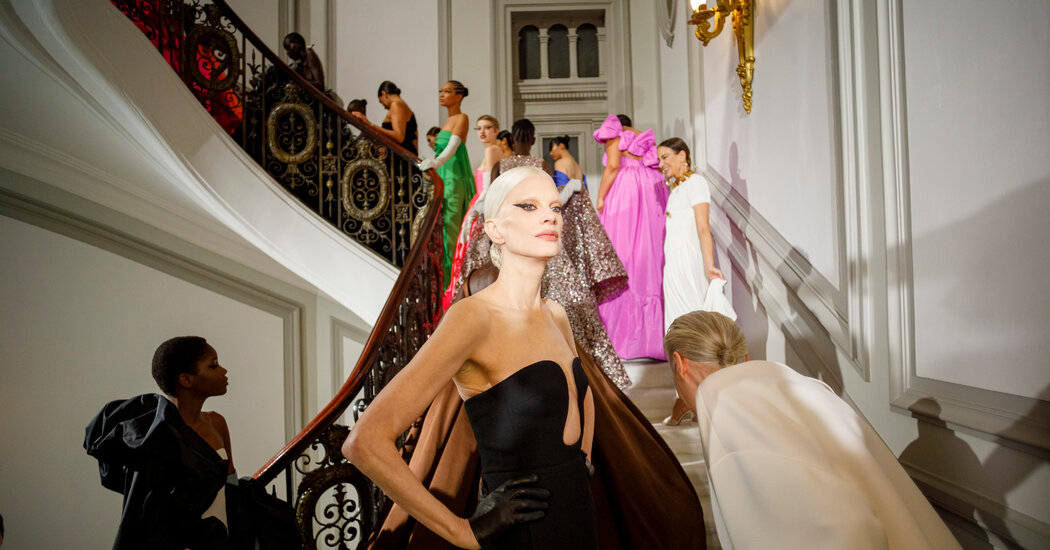 PARIS Lara Stone, the gaptoothed Dutch-English model often compared to Brigitte Bardot who was at the top of models.coms Top 50 models in the world list from 2010 to 2012, has done many things in fashion.

She has been on the covers of Vogue, had a Calvin Klein exclusive and married a celebrity (the British comedian David Walliams; they divorced in 2015). But even during her weekday she rarely walked the couture runways.

Her body was not considered, said Pierpaolo Piccioli, the creative director of Valentino, a couture body. Her bust was too big; her walk, dubbed the Lara lurch, too weird.

But thats exactly why Mr. Piccioli wanted Ms. Stone, now 38, in his show this week. Also Kristen McMenamy, 57; Marie-Sophie Wilson, 73, and an entire assortment of models ranging in dress size from zero to 10, in height from average to towering, and with various permutations of breasts and butts and thighs and stomachs that would otherwise, perhaps, have disqualified them from the job. (There were men, too, of a variety of ages, if not sizes.)

The point being, said Mr. Piccioli, to refute the idea that there is one single ideal, one definition of beauty he called it a canon of beauty in a preview other than a person who feels good about themselves as they actually are.

Knock me over with an ostrich feather.

For years, couture has been focused on the major: major statements, major sets, major venues, major jewels. It was the part of fashion where imagination ruled, the crazier the better (and the more perfume you could sell). Fah with wearability! Leave that to the ready-to-wear. All kinds of profligacy was justified in the service of the dream.

What that meant was never entirely clear Whose dreams? Consumers? Designers? But as couture is out of reach for all but the One-Tenth of the One Percent, it sounded about right (you cant get it, but you can fantasize about it, and buy other stuff in the meantime).

Now there are few reasons to get wildly dressed up, and a lot of reasons not to. Or at least not to brag about it. The whole dream scenario risks becoming irrelevant. No one made that clearer than Viktor & Rolf, back on the runway after a two-year hiatus with their own kind of fashion horror story inspired by Nosferatu.

There were looming shadows, witchy fingernails and tuxedo suits and governess dresses with shoulders so gigantically exaggerated built on a corseted superstructure, they started up around the ears that the models looked like they were being swallowed whole by their garments. Help! Save them! Creative vision had grown (literally) out of control.

In a necessary reset, excess is being traded for privacy. The Valentino show was held in the white-carpeted rooms of the house headquarters on Place Vendme, with the relatively tiny 60-person audience so close to the models that the guests could see them breathe.

They could also see that Mr. Piccioli had built his dresses some so small they verged on the dangerous, some in chiffon wound round the bodice and trailing behind like their own slipstream to suit the bodies inside, rather than choosing the body to go with the dress. But the pajama suit; the swishy harem jumpsuit; the regal taffeta; the sculpted, sparkling ball gowns. The opera capes, treated like sumptuous throw blankets.

He wasnt trying to preach diversity, now a ubiquitous goal in fashion, but to celebrate individuality, in all its middle-of-the-road variations. Theres a difference. One is a public position, the other a form of self-care.

In this, it may be the most modern thing that happened all week.

Its a more current idea, anyway, than the empowerment-through-galatic-empress-garb on view at Fendi, where Kim Jones plumbed the sci-fi obsession with classic Greek and Roman times, cut it with a dash of Vatican luxe and a whiff of heraldic glory, and conjured up a collection of evening gowns in black and white, cardinal crimson and papal purple. Encrusted with pearls and mink embroidery, hand painted with a trompe loeil marble Piet and other statuary, they had artistry and a severe elegance, but none of the subversion that creates forward momentum.

For that, see Glenn Martenss stint as the guest designer for Jean Paul Gaultier.

Since the founder retired in 2020, the house has invited a different designer to interpret the archive each season; first, Chitose Abe of Sacai and now Mr. Martens, otherwise known as the designer of Y/Project and creative director of Diesel. He built his collection on the signature Gaultier corset padded hips, tightly laced waist and then put it on a runway so narrow guests could see the bulges of flesh beneath.

Juxtaposed with ball gowns in emerald and champagne, their skirts molded with mountains of wire so they resembled both boiling seas and vats of whipped cream, knit marinires bristling with spiky coral (get it?) and dresses woven from desiccated strips of tulle and chiffon complete with rivers of trains, it was a reminder that no matter how grand the gowns get, there is humanity, in all its visceral reality, beneath. This is Mr. Martens first couture collection, but it shouldnt be his last.