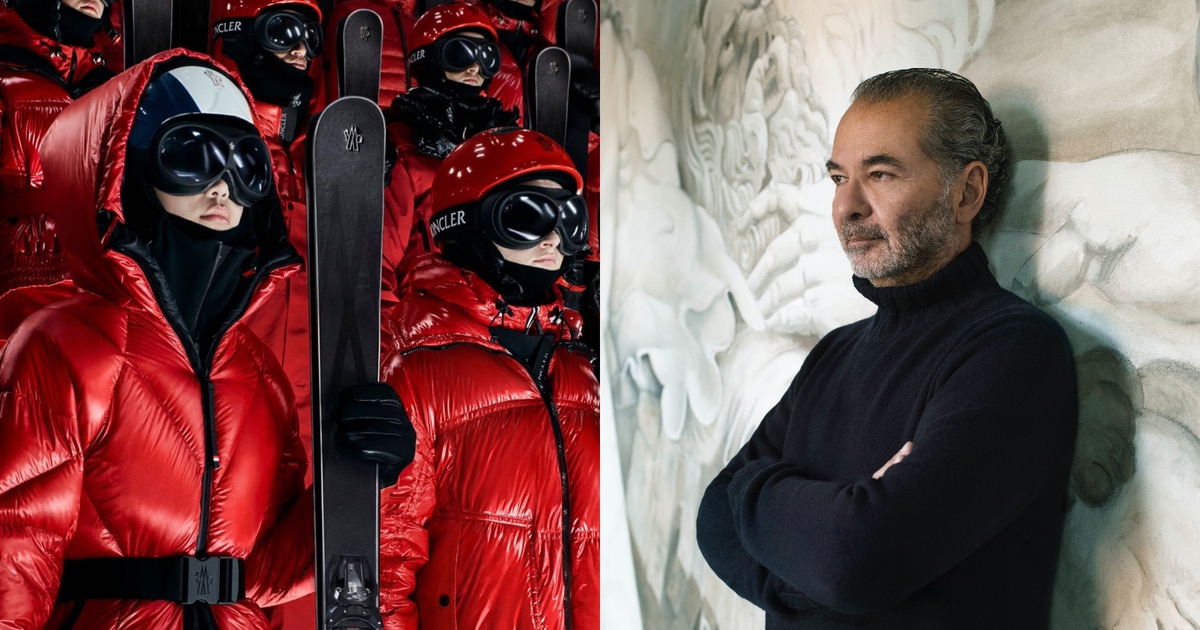 MILAN On a recent Sunday hike in the canyons above Bel Air, Calif., Remo Ruffini was surprised to see how packed the trails were with affluent young athletes, who are increasingly dedicating their time (and their money) to hiking and mountain sports.

I was shocked, said Ruffini, who is the chairman and CEO of Italian outerwear giant Moncler. I saw more people than I knew there than on Rodeo Drive, the luxury mall where his brand has its LA flagship.

Not enough of these people, it seems, wore Monclers.

Over the past four years, the brand has grown and engaged its audience with ongoing collaborations with trending designers, rolling out up to eight capsule collections a year as part of a massive marketing initiative dubbed Genius.

But while Moncler’s luxury positioning between sportswear and runway fashion saw its revenue surge, the pace of buzzing fashion collaborations risked stealing the spotlight from the brand’s heritage in sports. outdoors. Many millennial shoppers who have started wearing shells, fleeces and other technical clothing from the trail to the street are opting for brands like ArcTeryx, Patagonia and The North Face.

Now, Ruffini is focused on capturing this wave of consumer interest, relaunching the Monclers Grenoble skiwear footprint with a focus on selling technical mountain sports clothing to active millennials. We come from this world, he says. We are one of the brands that really deserves to focus on the mountain.

Grenoble’s relaunch isn’t the only change underway for Moncler: Speaking ahead of the company’s first Investor Day in four years, Ruffini outlined plans to reconfigure its brand structure, expand its retail footprint with new stores for the Moncler brand and the recent Stone acquisition. Island, and accelerate diversification by investing in footwear.

The strategy comes as the company seeks to maintain growth after sales rebounded strongly from the pandemic. In the first quarter of 2022, Moncler sales rose 29%, the company said, while Stone Island rose 32%. Both labels beat analyst estimates. At its investor event on Thursday, the company announced that it would carry out 100 store openings, moves and extensions for the Moncler brand over three years.

Overall, the group’s revenue topped $2 billion ($2.12 billion) last year, nearly four times as much as when Moncler went public in 2013.

Still, the company relies heavily on a few standout items like its 1050 Moncler Maya jacket. And the outlook for 2022 is becoming increasingly uncertain amid rapid inflation, the return of coronavirus lockdowns in China and Russia’s invasion of Ukraine.

We don’t expect significant consensus upgrades after the 1Q22 results as the outlook will likely be overshadowed by headwinds in China and tough comparisons in 2Q22, wrote RBC analyst Piral Dadhania, who has a rating. underperformance on the stock, indicating a high relative valuation to expected sales and earnings. Moncler remains a high-quality luxury company with leading credentials in the outerwear category, however [its] the current setup leaves little room for error.

After pouring resources into its Genius initiative, whose launch in 2018 promised a new marketing strategy for a world where consumers crave novelty at the speed of Instagram, Moncler plans to temporarily pause the program so it can redirect investment and marketing to its main line in addition. to the revival of Grenoble. These core projects will benefit from a rapid pace of activations from late September through the end of the year, Ruffini said, as the brand plans to shine a light on its heritage as part of a 70th anniversary push.

The Genius 1952 line, a seasonal range designed by in-house creative director Sergio Zambon, will be reintegrated into the mainline collection, which is expected to introduce more creative products as well as a line of non-logo items alongside hit stories like his Maya zipped jacket and hoodies. Partnerships with former Apple designer Jony Ive and the Lebron James Foundation are also underway.

Genius is set to relaunch next year with a focus on targeting Gen-Z customers, and will seek a group of collaborators from other industries like entertainment and sports rather than partnering exclusively with fashion designers. .

Ruffini credits the Genius program with instilling a digital-first, always-on-marketing culture throughout the company, as well as attracting younger consumers to the brand.

But while these initiatives boosted Moncler’s audience and helped preserve a hard-won fashion positioning (before Genius, Moncler sold seasonal ready-to-wear lines by Giambattista Valli and Thom Browne), they did not address the brand dependence on a handful of flagship products. , like the Maya. Additionally, the collaborations risked confusing consumers about the identity and core values ​​of the brand, and often did more to raise the profile of the collaborators than shine a light on Moncler itself.

Genius was a success in terms of communication through the product, in a very fast way, according to Paola Cillo, professor of innovation and coordinator of the luxury concentration at Bocconi University in Milan. This brought a sense of speed and dynamism to the brand. But from a business perspective, I don’t see where that leads, she says. They still need to expand their codes, increase the number of items they actually sell.

While Moncler has seen success with some ready-to-wear like cut-and-sew streetwear pieces, efforts to grow categories like accessories and footwear have progressed more slowly. Moncler offers a full lifestyle offering, including backpacks, eyewear and even fragrances, but these categories still account for a small share of sales.

Unlike most luxury rivals, Moncler doesn’t focus on bags. I don’t see the match with our brand, Ruffini said.

Instead, shoes are where Moncler is placing its bets: the company is seeing growing demand for luxury sneakers in the US as former office workers shift spending away from traditional leather-soled shoes for good. . A new brand manager hired by sneaker giant Nike, Gino Fisanotti, could help the category succeed.

A recent collaboration with Hoka provided market entry and was a near-instant sell-out, Ruffini said.

Of course, Moncler’s biggest push to diversify is in Stone Island, which the company acquired in a $1.4 billion deal last year. There, the company is working to reduce distribution agreements and roll out more directly operated stores, targeting 100 locations by the end of 2024, up from just 30 at the time of the deal.

The product is amazing, but changing the culture is key. A DTC approach is a must, Ruffini said. In addition to improving the store concept and online highlights, sharper and more modern marketing will be needed to expand the brand’s audience while maintaining its authentic, tribal appeal.

The Stone Island deal has sparked speculation that Ruffini could become a consolidator in the Italian fashion market, alongside players like OTB chairman Renzo Rosso, who has bolstered his portfolio since the pandemic.

Supply chain acquisitions could feature in the brand’s plans, particularly as it seeks to strengthen its presence in footwear, and as concerns over sustainability and speed to market market are fueling a shift to producing a greater share of items in-house. The brand plans to increase its own manufacturing to 30% of its sales, compared to around 15% today.

However, the acquisition of additional brands is not part of the strategy for the coming years, as the integration of Stone Island and the redesign of Moncler divert attention. I don’t think we have time, Ruffini said.

Editor’s note: This story was last modified May 5, 2022, 2:45 p.m. BST. Updates to paragraph 9 to include comments on Moncler retail expansion, supply chain goals.

Boeing moves its headquarters from Chicago to Virginia