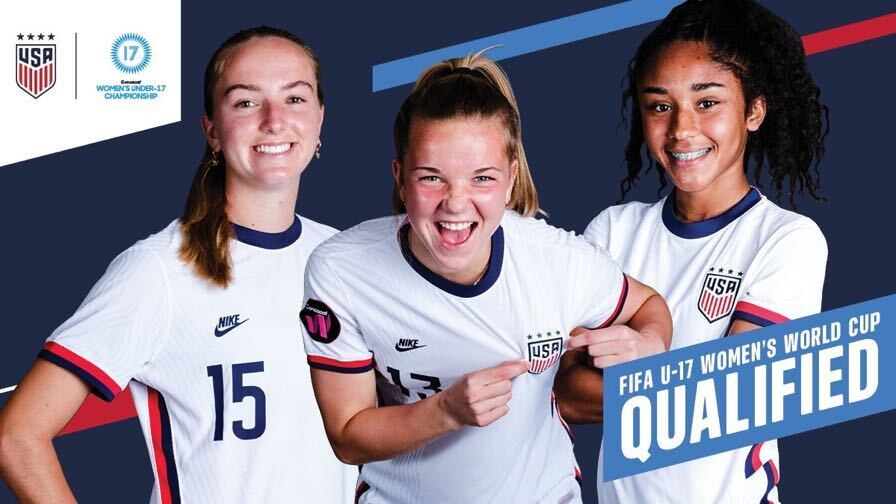 SANTO DOMINGO, Dominican Republic (May 6, 2022) The United States U-17 Women’s National Team clinched their spot at the 2022 FIFA U-17 Women’s World Cup and advanced to the Concacaf Women’s U-17 Championship final after defeating the Canada 3-0 with a dominating effort that saw the young Americans build up a 29-3 shooting margin.

A brace from striker Melina Rebimbas and a goal from striker Onyeka Gamero highlighted a classy and appealing display of rhythmic, attacking football and defensive pressure.

With the victory, the United States will now face Mexico in the championship game at Estadio Olmpico Flix Snchez on Sunday, May 8 at 5 p.m. ET (Fox Soccer Plus/ViX). Mexico beat Puerto Rico 5-0 in the other semi-final to earn their World Cup berth and a berth in the final. Puerto Rico and Canada will play the third-place match on May 8 at 2 p.m. ET (Fox Soccer Plus / ViX) for the third and final Concacaf spot for the upcoming FIFA U-17 Women’s World Cup in India.

The United States immediately took control of the game, sending the ball with speed and skill. The United States launched waves of attacks against the Canadians, particularly on the right flank as defender Gisele Thompson and Gamero combined to terrorize the defence. At 18and minute, the work of the United States paid off with an opening goal after Rebimbas received a pass from Nicollette Kiorpes on the left side of the penalty area. She turned towards goal and buried a left-footed shot from seven yards into the bottom right corner.

The United States came out for the second half in much the same way, limiting the Canadians’ time on the ball with a great team in defense while playing most of the game in their attacking half. Rebimbas doubled the lead at the 58and minute, combining with midfielder Lauren Martinho deep inside the penalty area on the left side before finishing between the Canadian keeper and the left post.

Twenty minutes later, Gamero added his name to the scoresheet and put the game to bed – after combining with substitute Amalia Villarreal to bury a powerful left-footed strike from around 12 yards out that skidded into the bottom corner left of the net.

In the end, the United States had 14 nil shots on target for Canada, retained 79% of possession and had a 16-0 margin on corner kicks. Canadian goalie Coralie Lallier had an excellent game, making 11 saves in total.

United States Melina Rebimbas (Nicollette Kiorpes), 18th minute Kiorpes found Rebimba’s feet with his back to goal near the left corner of the penalty area. She then turned and fired a powerful left-footed shot into the net from the opposite side from seven yards out to open the scoring. US 1, CAN 0

United States Melina Rebimbas (Lauren Martinho), 58th minute After a controlled attacking play from the United States inside the box, Rebimbas collected the ball near the left side and played a wall pass with Martinho. Rebimbas received the return pass inside the penalty area and slotted the ball into the net just inside near the post with his left foot to score his second of the night. US 2, CAN 0

USA Onyeka Gamero (Amalia Villarreal), 78th minute Villarreal sent the ball to Gamero inside the box on the right side. She took a touch inside and fired a left-footed shot from a difficult angle between the legs of a defender and just inside the left post about 12 yards out. US 3, CAN 0

No. 12 Men’s Tennis Advances to NCAA Second Round