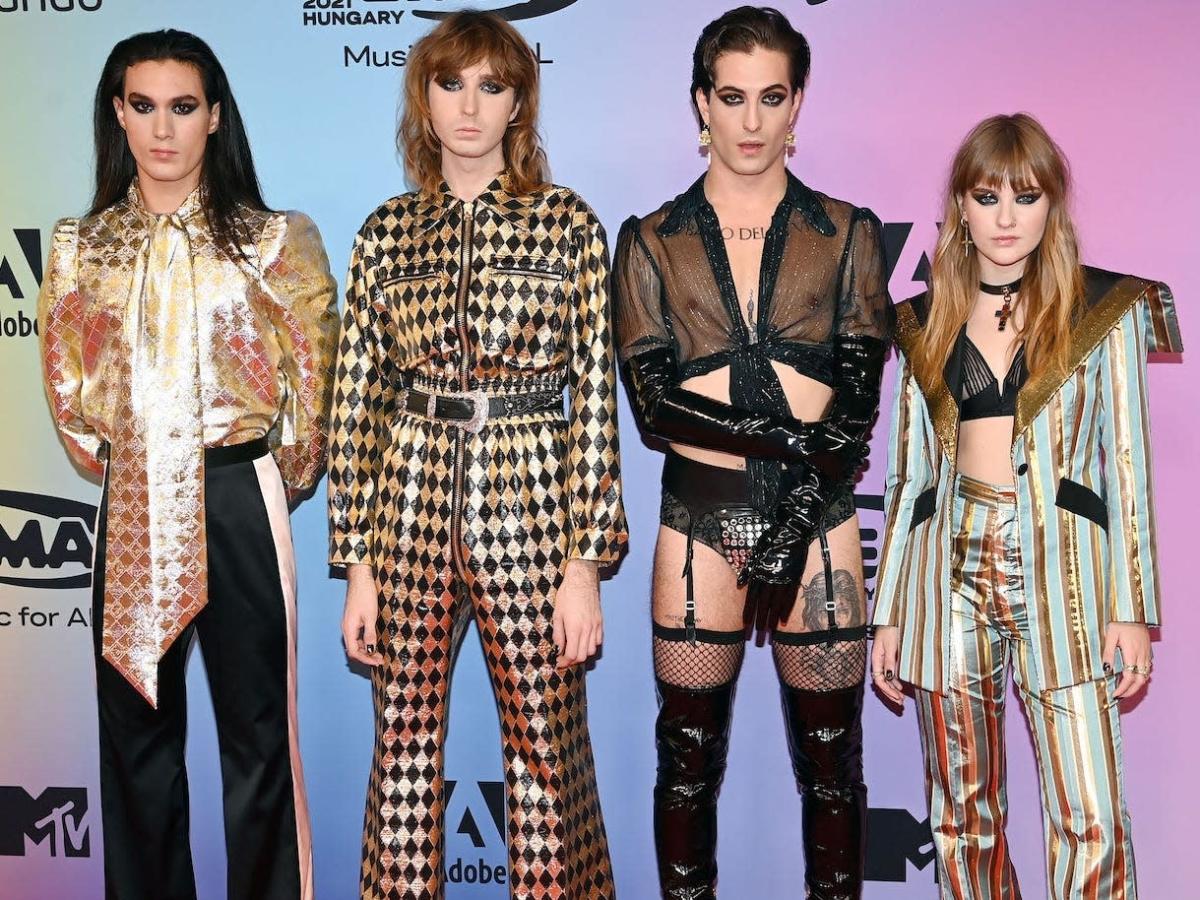 Mneskin formed in Rome, Italy around 2016 and developed a devoted fanbase through street performances. But it was while taking part in the Italian “X Factor” at the end of 2017 that the group first presented their daring fashion.

Musicians were apparently fond of bold prints, hats and fishnets at the time.

They often coordinated outfits early in their careers and made bold fashion statements on red carpets.

For a Netflix first, Torchio, De Angelis and Raggi all wore striking black suits with gold accents. David, however, contrasted in a metallic suit and black boots.

They then experimented with even bolder looks at the 2021 Sanremo Music Festival.

For their first performance at the event, De Angelis and David both took to the stage wearing dark lipstick and plunging neckline tops.

Torchio, meanwhile, opted for a see-through shirt, while Raggi wore none at all. Instead, he donned an open, sparkly jacket.

For a performance, the four band members wore pink corsets.

They each paired the clothes with black dress pants and white blouses with puff sleeves.

They then matched on stage in see-through bodysuits and low-rise metallic pants.

Their combinations were all slightly different. David’s had long sleeves and a deep V-neckline, while Raggi’s was sleeveless and adorned with lace.

They went on to win the festival, earning them a spot in the Eurovision Song Contest 2021 while wearing optical illusion catsuits.

Their mesh outfits were sheer, decorated with silver sparkles and tied together with thin strings on the bodice.

The sparkles created the illusion of tattoos on their bodies.

When they arrived at the famous pageant months later, they made such bold fashion statements as their song, “Zitti E Buoni.”

For the grand finale of the event in which Mneskin won all four paired members in maroon sets. Torchio wore a vest with a deep neckline and matching pants, while De Angelis wore a similar catsuit with bell sleeves.

David had the most unique look with a dungarees-style jumpsuit, and Raggi kept his classic style, an open jacket and skinny tie.

As their hit cover of “Beggin'” rocketed up the charts in September 2021, Mneskin performed at Global Citizen Live in daring pink and black outfits.

They continued to push the boundaries in October 2021 when they performed their first concert in the United States.

For the New York show, the four musicians wore red and purple outfits.

Torchio’s look included a red tie, Raggi’s outfit had purple leather pants, and David paired his vibrant suit with a choker necklace that said “sex.” De Angelis, meanwhile, wore high-waisted pants, ditched a shirt, and wore nothing but duct tape across her chest.

They did the same when they traveled to Hungary in November 2021 to attend MTV’s European Music Awards.

They all wore custom Gucci lookswhich has become standard for the band since winning Eurovision.

De Angelis wore a blue and gold metallic striped suit with a black sheer bra underneath, and David teamed a sheer shirt tied at the waist with heels and a pair of studded underwear.

At the Brit Awards, they again coordinated in pink, black and purple.

Torchio and De Angelis were arguably the worst the most daring looks that night.

The drummer paired a sheer mesh shirt with a cropped jacket and leather pants, while De Angelis donned a purple latex catsuit with criss-cross ties.

More recently, Mneskin ditched most of her clothes to perform at her first Coachella.

Although Raggi kept it simple in a puffy blouse and studded shorts, Torchio took things a step further in a chainmail top, harness and leather pants.

But it was David and De Angelis who really stole the show with their fashion. The singer first took to the stage in a pink Gucci dress, while the bassist wore a sheer lace catsuit. Both then ditched the outer layers, revealing their leather underwear and heels.

Read the original article at Initiated