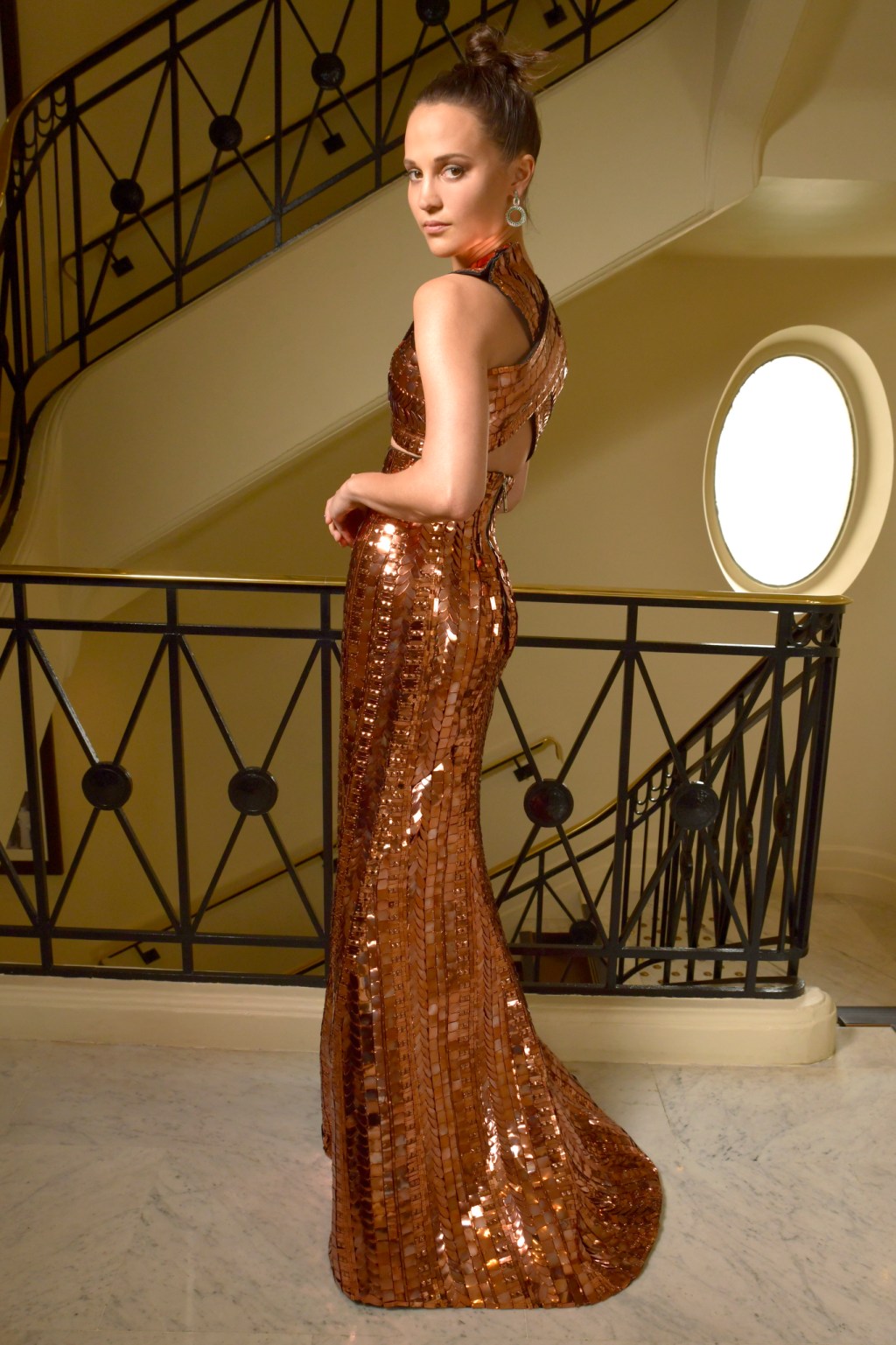 Alicia Vikander walked the red carpet on Sunday night for the premiere of her upcoming “Irma Vep” series in a custom Louis Vuitton copper column dress, dressed as if she were going into an extremely elegant battle.

“I feel like I have my armor, a very nice Cannes version. I’m thrilled to see the light hit when we’re on the red carpet,” Vikander told WWD as she dressed in the Louis Vuitton suite minutes before the premiere.

The dress mixed two looks from last week’s cruise show in San Diego with copper beaded warrior elements. Created with Nicolas Ghesquière, the pair embarked on the look as soon as the festival program was revealed in mid-April. It took two weeks and over a thousand hours to build the sculptural dress.

Vikander, who has been a Vuitton ambassador since 2015, said she developed not only a creative clothing partnership with Ghesquière, but also a friendship.

“What’s amazing is that he has such an eye for making beautiful designs and dresses, but he also sees me as a person wearing it. It’s amazing when I get the sketches, it’s defined that he knows me and I can see it,” she said. “The thing about Nicolas is that his own style looks back and honors fashions or classic styles, honors those materials and that knowledge -do, brings them out and blends them together to become something almost ahead of its time,” the actress added.

When she embarked on the “Irma Vep” project with director Olivier Assayas, she saw a synergy in it and brought the two together.

“The most exciting thing was that Olivier and Nicolas, I had heard them separately talking about each other and saying that they were fans of each other, so it was one of those things that I was so happy to have them meet and make that connection,” she said. The result was that Ghesquière designed all of the costumes for Vikander’s character on the show.

The series is a remake of Assayas’ own 1996 film “Irma Vep,” which itself is a remake of Louis Feuillade’s 1915 soap opera “Les Vampires.” The new series plays with these contradictions in time and plays with the idea of ​​being a film within a film, confusing what is real and what is part of the plot.

For “Vep”, Ghesquière pays homage to the original but adds subtle touches to give it an air of today. “He used the silks that were in the original suit and added some velvet, so he did what I think he does best – honor the classic with a very classic silhouette, but then added heels steel for something very modern,” says Vikander.

The series filmed in Paris for five months, giving him time to familiarize himself with the very chaotic city and form deeper friendships with Assayas and Ghesquière. “I’ve never spent so much time there and it’s a whole different feeling when you get to stay there and you can actually start hanging out with your friends on a weekly, regular basis,” she said. declared. “I became a local.”

While she and husband Michael Fassbender have a home in the French countryside, their home base is Lisbon, a more laid-back city that offers her a good balance, she said. “I became more and more – I never thought I would say this, if you had met me 10 years ago I would have been like I didn’t live in New York or London or the a big city. And four years ago we moved to Lisbon. Because our work tends to take us to big cities and places that are quite busy, so when I’m not working, which isn’t anyway, it’s kind of nice to just be in a quiet place.

And the work she does. She is filming ‘Firebrand’, about King Henry VIII and Queen Catherine Parr in rural England. Vikander arrived in Cannes in time for the Vuitton dinner on Friday night and stayed until Sunday’s premiere, but would be on a flight back to the Derbyshire countryside within hours. Next up will be the second installment in the Tomb Raider franchise.

There’s a line in “Irma Vep” where her character says, “I’m young, I’m a movie star, what matters is staying sane.” So what is the actress doing to stay sane between all the throws around?

“I like that the work is quite intense on set and when the filming is done for the day, I go home, have dinner and take a bath. With the work, I love to go and experience it and do it fully and then I go home and switch off and read a book and cook some food,” she said, admitting it’s hard to find the time to rummage through books for pleasure, which she loves.

However, she doesn’t scroll through Instagram, TikTok or other social media distractions. “I don’t have any social media. I never had one. You asked what keeps me sane, and that’s certainly one of them.

1 share to buy, 1 to throw away when markets open: Alibaba, Best Buy

Five things to know about the National Hockey League playoffs