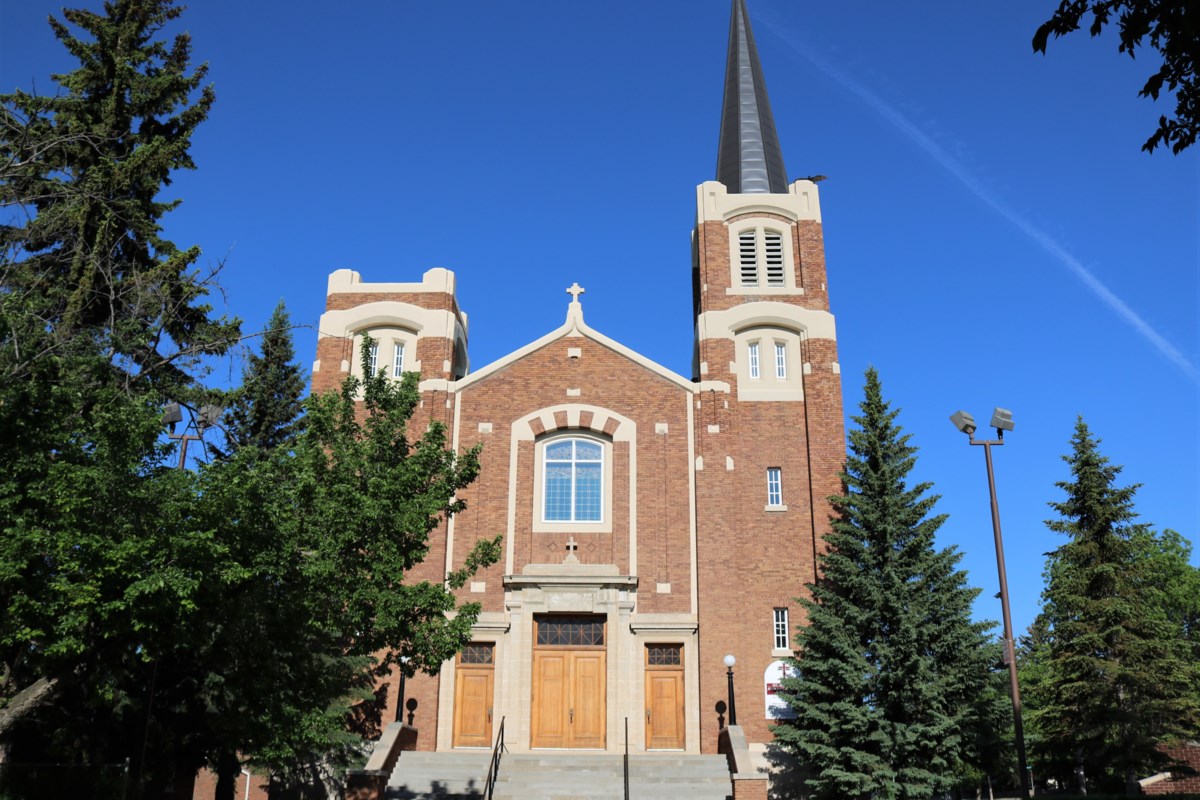 The band – which started in 1922 – welcomed dozens to the church hall on June 11 for two shows, which included tea, sandwiches and sweets. Eight models, including seven from Vanier Collegiate, walked slowly through the room as the emcee talked about the history of the dresses.

Along with a fashion show, there was an exhibition showcasing nearly 100 other garments – wedding dresses, gowns, christening outfits, shoes – that showcased fashion styles dating back to 1896.

The Moose Jaw Express attended the dress rehearsal for the fashion show the night before to take photos of the models in the outfits.

The first dress on display was from the wedding of Eve (Bolen) Kaip on July 8, 1935 at Holy Angels Church in Pangman. Kaip is Rose Schenher’s mother.

Growing up on the farm during the Great Depression, Kaip’s wedding dress was a special heavy ivory satin dress with a floor-length skirt, a half belt at the back closed with a matching fabric-covered buckle, an elbow bouffant – long sleeves adjusted to a small turn-up with fabric-covered buttons.

The outfit also has a fabric flower bodice on the left shoulder to complement the plain scoop neckline, while small seed beads make up the headpiece with a ruched floor veil embroidered around the edges.

Typical of the Depression era, Kaip didn’t own many fancy dresses, so she wore her wedding dress to many dances and events. She also wore elbow-length gloves during the wedding to hide her calluses from working on the farm.

The second dress is from the marriage of Audrey (Langille) Mokry, who was married on July 17, 1948 at St. Joseph’s Church in London, Ontario.

Mokry’s satin maxi dress is distinguished by its pleated center bodice with a row of tightly sewn fabric-covered buttons. The long sleeves are gathered at the shoulder and tapered to a point on the back of the hand. Although the veil did not survive the decades, it was embellished with lace and longer than the hem of the dress, giving it a train effect.

The third dress is from the marriage of Yvonne (Douville) Johner, who was married on December 29, 1958 at the Notre Dame d’Auvergne church in Ponteix.

The bride, groom and the entire wedding party had a long day as the ceremony took place in the morning followed by lunch. This was typical of Catholic weddings at the time, as they were expected to fast from midnight before taking communion.

Photos were taken in the afternoon in Swift Current, with the wedding party returning to Ponteix for dinner and a dance. A gift opening took place the following afternoon at the family farm.

The dress has a flared polyester skirt with two mesh overskirts, with a hoop to keep the shape of the skirt. The long-sleeved bodice is made of lace and covered with sequins, pearls and beads.

Tribute to the mother of the groom

The fourth dressing came from the marriage of Loretta (Wist) Mayall, who was married on August 26, 1961, at St. Joseph’s Church in Moose Jaw.

The outfit was called a ballerina dress since the skirt was mid-calf instead of floor length. The dress consists of a two-tiered white lace net skirt over a satin petticoat. A long-sleeved lace bolero has lily-stitch cuffs fastened with three satin-covered buttons and covers a simple spaghetti-strap bodice with a pleated satin waistband.

A short net veil tied to a beaded tiara accompanied the dress, while white cuffed heels and a bouquet of red silk roses completed the ensemble.

After the wedding ceremony, the new couple visited the groom’s mother’s grave and left the bouquet there to honor the mother, who had died the previous year after falling at the edge of Macdonald Falls in Montana.

A dress with a story

The fifth dress shown was from the marriage of Jean (Gadica) Landry, who was married on December 27, 1974 at St. Joachim’s Church in Edmonton.

The dress was a two-piece set with a long dress and train and cape and hood. The material is a white rayon velvet with engraved designs that give the material a shimmering look. The dress has a high neckline with a matching satin round neckline with a satin belt and satin bands at the end of the long sleeves.

The bodice is fitted and, from the waist, drapes in a soft A-line. The cape and sleeves display matching white fabric buttons and bows, while the dress, cape and hood are trimmed with white fur to give it a winter look.

Landry’s niece modeled the dress on their 25th wedding anniversary, while Landry wore the cape on their 40th celebration. Last summer, when Landry taught the sacraments to his grandchildren at Vacation Bible School, his granddaughter carried him.

Married by a novice priest

The sixth dress was from the wedding of Rosalie (Lukan) Boots – the current CWL President – who was married on June 25, 1983 at St. John the Baptist Church in Debden.

The dress is high waisted in chiffon with a small train, while the sleeves are long in transparent chiffon. It also has a stand-up collar with a blouson-style bodice.

The priest who married the couple was a friend who had been ordained only six days previously, so they were the first couple the priest married. This cleric is now Archbishop Albert LeGatt of the Archdiocese of Saint Boniface.

The seventh dress is from the wedding of Lana (Schenher) Miller on August 15, 1998 at Ascension Church in Calgary. Miller is the daughter of Rose Schenher.

The ivory dress has a sweetheart neckline covered by the heavily laced and beaded bodice that ends in a drop lace waistline. The lace sleeves are lightly gathered at the shoulder but are fitted at the elbow. The floor-length dress has a small train that activates in the back for evening activities.

Meanwhile, the shoulder-length veil is net with a small ribbon trim, while there are pearls and small white flowers on the headpiece which is kept intact with combs.

Miller had 50 first cousins ​​at the wedding, and when his brothers got married, the guest list had to be reduced. She avoided this problem by planning her wedding in August, in the middle of the harvest, knowing that not everyone invited could attend. While the groom was overwhelmed by the size of the family, the bride was thrilled they could attend and managed to get everyone in the group photo.

The eighth dress is from the marriage of Joleen (Kayter) Lichtenwald, who was married on July 1, 2006 at St. Joseph’s in Moose Jaw.

The strapless maxi dress is gathered at the waist and has a fully beaded train, while the bodice is fully beaded and has a straight neckline. The bride wore a hoop under the dress to hold up the skirt but it is no longer available.

Fifteen minutes before the ceremony, as the bride and her parents prepared to go to church, the photographer took a picture of the bride looking out the door. However, her dress grazed a greasy hinge, leaving a black streak down the front of the dress. As Joleen tried not to cry, her mother came to the rescue with various products.

The Tide pen didn’t work, but Watkins Degreaser did.