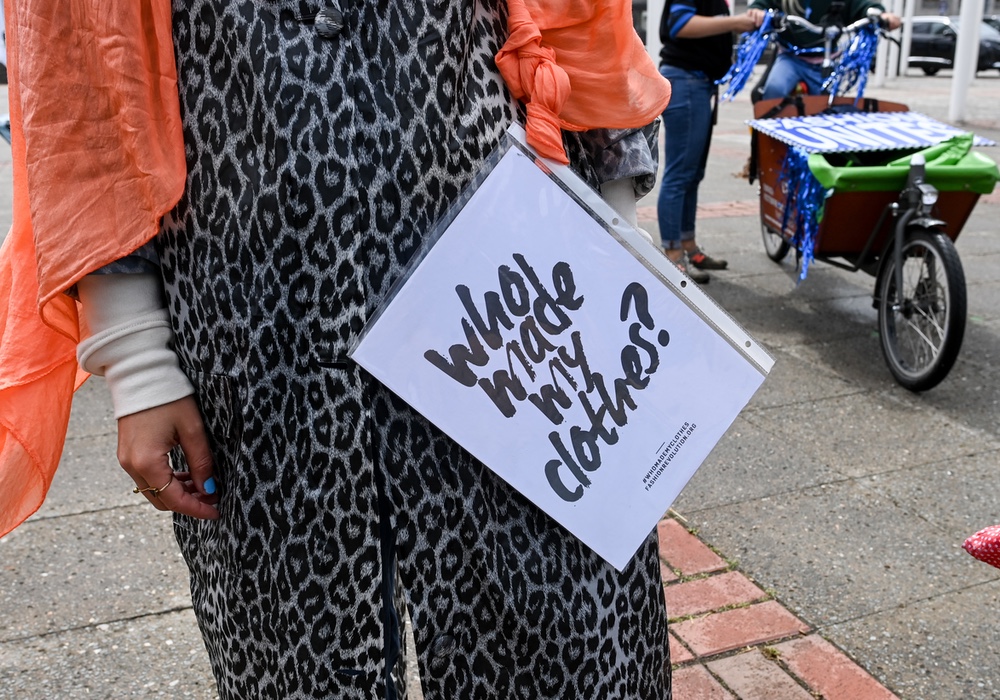 As fashion’s sustainability claims are increasingly put under the microscope, there’s still room to circumvent greenwashing, an industry expert insists.

“The only way to challenge greenwashing is to have information, to spend time on that information, and to have the push to find out what that information is,” said Orsola de Castro, co-founder of Fashion Revolution, during the advocacy launch. The group’s annual Fashion Transparency Index in London last month.

The seventh edition of the index, which ranked 250 of the world’s top fashion brands and retailers based on their public disclosure of human rights and environmental policies, practices and impacts, opens a window into what these companies are willing to say about their supply-chain operations, she says.

Companies are scored out of 250 possible points in a myriad of categories, including purchasing practices, decarbonization goals and sustainable materials. This is then converted into a percentage score, the higher the better.

“Once you speak the language, you can understand the nuances,” de Castro said. “And in terms of greenwashing, it’s a really important tool to be able to decipher what brands actually do versus what they say they do.”

Some progress has been made in seeking information from companies more accustomed to being discreet than speaking frankly. When the first Fashion Transparency Index was launched in 2016, only five out of 40 brands, or just 12.5%, were willing to disclose information about their inner workings. Today, 121 of 250, or 48%, are open for review, perhaps bolstered by growing calls from investors and policymakers in the United States and European Union for more information.

With overall progress ultimately remaining “too slow,” however, the industry still has a long way to go before it ends its addiction to secrecy, Fashion Revolution has found. Brands and retailers achieved an average score of 24%, just 1% higher than last year. Nearly a third of companies, or 81 out of 250, obtained less than 10%. Among them, 17, including Elie Tahari, Fashion Nova, Jil Sander and Tom Ford were eliminated with 0%. Only three brands, OVS, Kmart Australia and Target Australia, scored above 70%, and none exceeded 80%.

H&M, which is the subject of a class action lawsuit over “false and misleading” environmental scorecards and advertisements, slipped from second to fourth place with a score of 66%.

“I think we have to look at the GDP of all these brands that don’t disclose any information,” Liv Simpliciano, Fashion Revolution’s director of policy and research, said at the same event.

For Simpliciano, the results show that most apparel suppliers haven’t met what she calls the “bare minimum: being honest and truthful about your business practices.” Even low-hanging fruit such as publishing a list of Tier 1 suppliers was only picked by 48% of the 250 companies, though 10 brands that were reviewed in last year’s index have since done it for the first time, including Bally, Chloe, and Guess. And despite the growing urgency of the climate crisis, less than a third of brands and retailers have disclosed decarbonization targets covering their entire supply chain, not just Scopes 1 and 2.

Another problem, Simpliciano said, is that brands and retailers disclose more information about their policies and commitments than about their results and impacts. While 28% of companies were open about the circular solutions they were developing, only 15% disclosed their annual production volumes and only 8% shared their post-production waste volumes.

“Brands absolutely know how much they produce because no business is sustainable if they have no idea what they produce,” she said. “Clearly they are choosing not to release this information, which really masks the impact of overproduction and overconsumption. If brands continue to not be transparent about their production volumes, it indicates that they might be more interested in profiting from the problem than solving it.

While degrowth, she noted, seems like a “scary word” to the industry, it is “absolutely” necessary. “We can’t reasonably meet our carbon reduction targets, which by the way really aren’t great, by 2050,” Simpliciano said. “We are in a climate crisis as it is. We received a code red warning.

The other numbers are just as dismal. Only 11% of brands and retailers publish their suppliers’ wastewater test results, “despite the textile industry being a major contributor to water pollution”, according to the index. Only 24% disclose how they minimize the impacts of microfibers, and a slightly higher 32% publish their lists of substances subject to manufacturing restrictions.

In terms of purchasing codes of conduct, only 12% indicate how their purchasing practices might affect garment suppliers and workers. Hence, the vast majority of companies surveyed – 94% – do not disclose the number of employees in their supply chains who pay recruitment fees, painting an “unclear picture of forced labor risks”. Equally salient, only 13% of companies disclose how many of their supplier facilities have unions.

What’s interesting, said Maeve Galvin, Fashion Revolution’s project manager for the European citizens’ initiative to demand decent wages for garment workers, as well as its director of global political campaigns, is that 84 % of brands and retailers publish a policy outlining their commitment to freedom of association, the right to organize and collective bargaining at the supply chain level.

“It ties in with what Liv talked about earlier, which are well-worded, very simple commitments that are disclosed but not supported by impact and progress data,” Galvin said. “So the distinction between the 84% who make high-level commitments and the 13% who revealed what the impact looks like on the ground is quite stark. And that’s consistent with what we know, which is that the environment for organizing collective bargaining is incredibly difficult in some places and impossible in others.

When workers can’t organize, they can’t advocate for better working conditions and higher wages, she said.

“Garment-producing countries are truly some of the worst places in the world for unions,” Galvin added. ” And it is not a hazard. It is tied to sourcing strategies and a business model that scrambles for low prices through a cheap labor mechanism. So again, what we really need here is honesty, so that brands’ stated commitments to freedom of association and collective bargaining are not out of step with what’s happening on field.

This discrepancy is coming under increasing regulatory scrutiny. The Norwegian Consumer Authority, for example, recently challenged Norrøna’s use of generalized Higg Material Sustainability Index data to claim that its organic cotton T-shirts are better than conventional alternatives. (He was not rated by the Fashion Transparency Index.) Britain’s Competition and Markets Authority warned Asos, Boohoo and George at Asda last week that it will investigate whether their statements eco-friendly really hold up. (They received scores of 51%, 27%, and 28%, respectively.)

“Quite frankly, brands shouldn’t be allowed to make claims about sustainable materials without disclosing what they mean by that and backing it up with information,” said Ciara Barry, policy and research coordinator. at Fashion Revolution. “This is the environment we find ourselves in, where greenwashing is rampant. And we all know that without careful scrutiny, greenwashing really does thrive, which is why we can’t have unsubstantiated claims from brands.

Transparency, emphasizes Fashion Revolution, should not be confused with sustainability. Even if a brand or retailer scores high on the index, that doesn’t mean it’s socially or environmentally better.

“Transparency is only a first step, but it’s an important step,” de Castro said. “And it’s a first step that has been increasingly recognized as something we all need to counter an industry that is impenetrable, opaque and deliberately designed to be that way.”

“We can’t fix what we can’t see,” she added. “Keeping brands accountable and keeping the industry in check and in check is the first step to understanding what they’re saying.”

Black women lead: How Google is transforming black communities with the power of the digital world