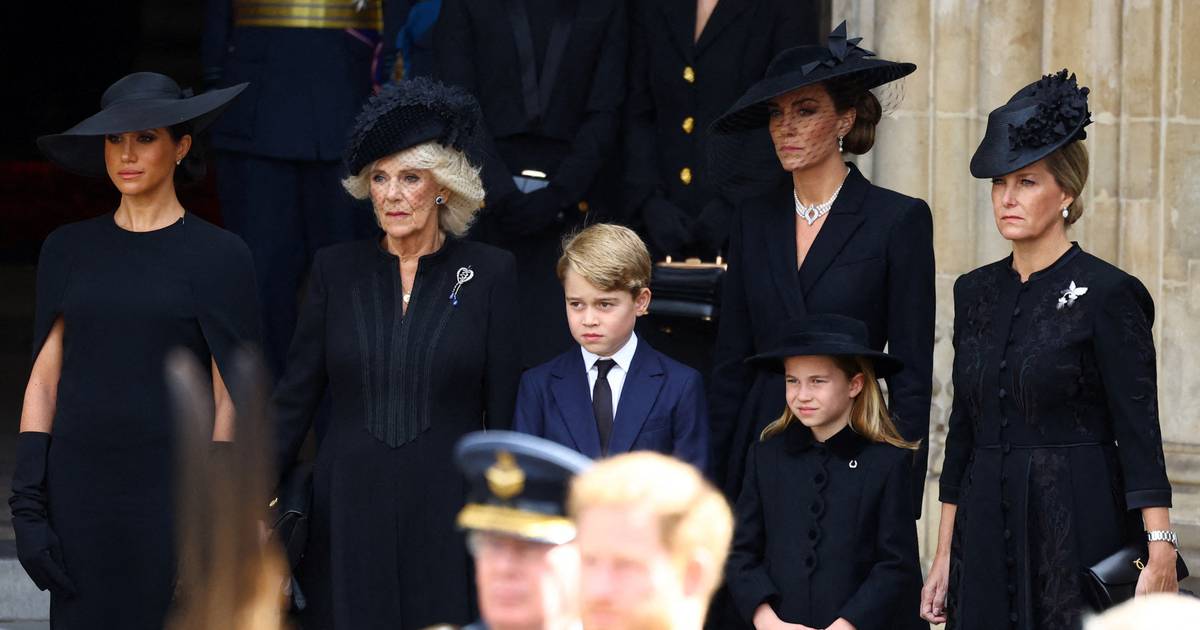 Seventy years have passed since the last time a monarch was buried in the UK. And while Queen Elizabeth II’s funeral pomp and ceremony bore many similarities to the 1952 memorial held for her father, King George VI, it included several modern updates.

During her record reign, Queen Elizabeth helped usher Britain into the modern age. But she was also a staunch follower of royal tradition and her funeral, which she herself helped plan before her death, reflected that mindset.

More than 2,000 guests attended the ceremony at Westminster Abbey, including a long list of royals, politicians and other foreign dignitaries, as well as all adult members of the extended royal family . It will be the first state funeral held in the UK since that of Winston Churchill in 1965.

Regarding the dress code, the protocol is strict. The service saw royal fashion traditions, such as veils, which have not been seen in decades since George VI’s funeral, in a more contemporary way. There have also been heated discussions about who is allowed to wear the military uniform.

“It’s quite formal,” said Marlene Koenig, royal historian and author of the Royal Musings website. “It’s the highest of the highest for a funeral.”

Much of the funeral attire was what you would expect: Dark, black robes for the women and the men in costume. Of course, hats were de rigueur for women. (Even 7-year-old Princess Charlotte wore one.) But the kind of eye-catching (even headline-grabbing) fascinators that are the norm at more celebratory events like royal weddings have been kept at home. in favor of more discreet styles.

After Her Majesty’s death, the British workshop and milliners prepared for the onslaught of orders. “We have changed our shop to only carry black hats in anticipation of our customers’ needs,” said Stephen Jones, a London-based milliner. “What seems most appropriate to me is simplicity in both silhouette and texture. Naturally a veil is also part of mourning, so many of our simple black hats have been relined with short veils. I think it has nothing to do with fashion and more with respect and proper dress.

Prominent royal women like Catherine, the Princess of Wales and Queen Consort Camilla probably had their ensembles prepared for this occasion and sitting in their closets for months, if not years now. There was speculation that Kate, as well as Meghan, the Duchess of Sussex, whose clothes are the subject of endless discussion, might have chosen to wear an outfit they had previously worn again. Ultimately, the Princess of Wales wore a black version of the Alexander McQueen coat dress she wore to the Queen’s Platinum Jubilee in June, while the Duchess of Sussex wore a black dress with a cape.

“They are quite aware that their fashion is widely discussed and debated,” said royal historian Jessica Storoschuk of An Historian About Town. “We see them wearing repeats at events where they don’t want to draw attention to what’s going on.”

One of the biggest questions about funeral attire was whether older women in the royal family, such as the Queen Consort, Princess of Wales and Duchess of Sussex would wear full veils for the funeral. opportunity.

These headwear have been a staple of royal funerals for decades, and Queen Elizabeth, Princess Margaret, the Queen Mother and Queen Mary all wore them to the funeral of King George VI. However, when the Queen Mother died in 2002, veils were absent from her funeral. (The state funeral for a reigning monarch, however, is a more formal and meaningful occasion.)

While many royal fans hoped to reappear on Monday as a sign of the monarchy’s opulence, veils were a rare sight at Queen Elizabeth’s funeral, a sign of all that has changed during her reign.

“It’s a unique opportunity to remember the position these people hold, because no one else is wearing a formal long black coat, diamond jewelry and that elaborate mourning veil,” said fashion expert Christine Ross. royal. “We only see it once every few decades for the death of a monarch.”

King Charles has perhaps advised against the most antiquated accessory, especially as he prepares to usher in an era of ‘light’ monarchy in order to justify the institution’s existence in today’s world. today.

The Princess of Wales and the Duchess of Sussex managed to find common ground during the service for the reception of the Queen’s coffin at Westminster Hall on Wednesday, where they wore less dramatic birdcage veils, a thin veil of transparent netting that covers part of the face – a more contemporary and less dramatic version of the accessory. Catherine took a similar approach at the funeral, with a thin sheer mesh veil covering – but not obscuring – her entire face, just like Queen Consort Camilla.

“I would be very surprised in 2022 if these women were veiled,” Koenig said. “I think we’re past that.”

Attendees, especially female royals, honored the Queen in other ways through their choice of accessories. The Princess of Wales and the Duchess of Sussex wore pieces from the Queen’s jewelery collection during the period of mourning. The Duchess of Sussex wore a pair of diamond and pearl earrings that once belonged to the Queen, while the Princess of Wales wore the Queen’s multi-strand diamond and pearl necklace, which she also wore to the prince’s funeral Philip last year. Even Princess Charlotte wore a small horseshoe-shaped diamond brooch, said to have been a gift from her late great-grandmother.

Other guests without direct access to the Queen’s jewels have found their own ways to pay homage to Her Majesty. Baroness Patricia Scotland, Secretary General of the Commonwealth, who spoke at the funeral, for example, wore a double row of pearls.

“We will see lots of pearls all over the congregation at the funeral because the Queen loved them so much,” Ross said, referring to the Queen’s three-row pearl necklace, which the Princess of Wales reportedly wore on Tuesday. to greet his coffin on his arrival at Buckingham Palace. “They have almost become synonymous with Queen Elizabeth.”

A point of contention that emerged around the Queen’s funeral is which members of the Royal Family were allowed to wear military uniform for the service.

The controversy that has emerged mainly revolves around whether Prince Harry, the Duke of Sussex, will be allowed to do the same. Harry served in the British Army for a decade, even undertaking two tours of Afghanistan, one of the only living royals to face combat. (Prince Andrew, the Duke of York, also saw active fighting in the Falkland Islands in the 80s, but will also wear a suit to the funeral as he steps back from royal duties in late 2019 following fallout from his links to Jeffrey Epstein and allegations of sexual misconduct).

A spokesperson for the Duke of Sussex has released a statement confirming Prince Harry will wear a suit at the funeral, ending speculation. “His decade of military service is not determined by the uniform he wears, and we respectfully request that the focus remain on the life and legacy of Her Majesty Queen Elizabeth II,” the doorman said. -word.

However, it was later revealed that Prince Harry would be wearing his military uniform for a vigil at Westminster Hall on Sunday which the Queen’s eight grandchildren would be holding. At a vigil hosted by the Queen’s four children on Friday, Prince Andrew was also allowed to wear his uniform. Permission to do so is said to have been granted to the two by King Charles.