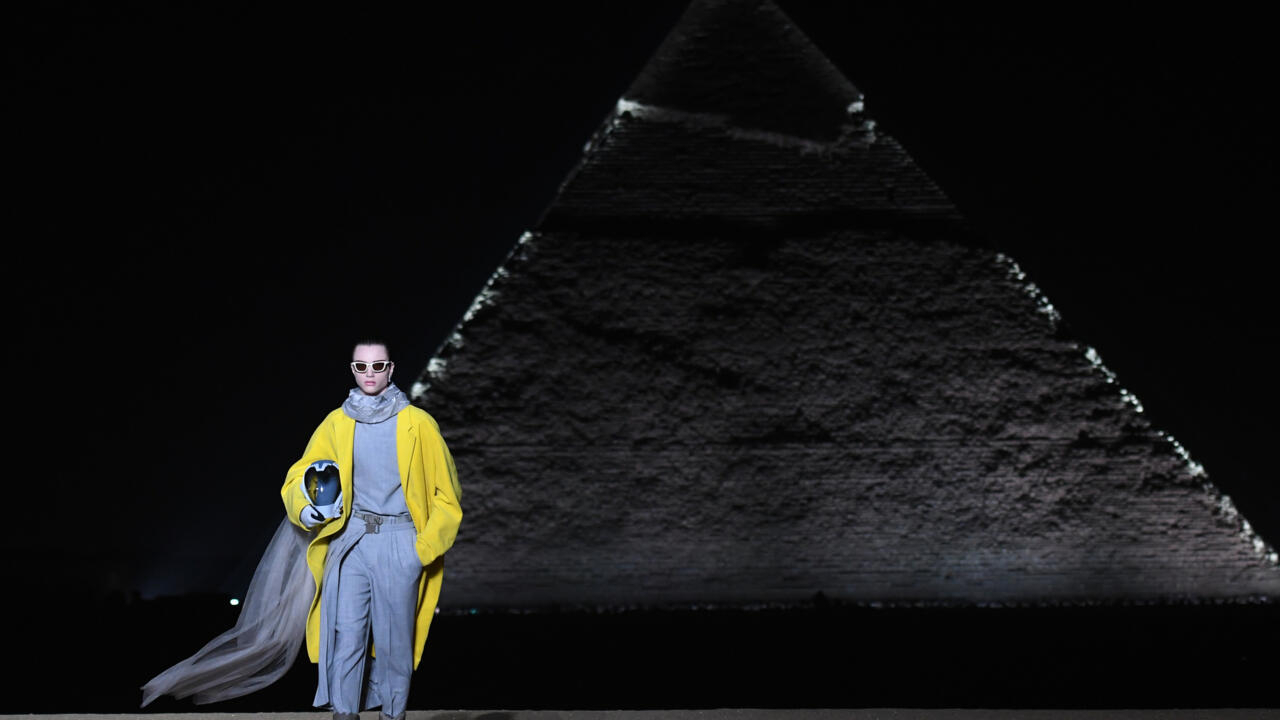 Cairo (AFP) Egypt is using the ancient grandeur of its pyramids as a backdrop for pop concerts and modern fashion shows, hoping to bolster its image, tourism and the luxury brand sector beloved by its wealthy elite.

French fashion house Dior presented its latest collection at the Giza pyramids on Saturday, after Italian designer Stefano Ricci held a show at Luxor’s spectacular Temple of Hatshepsut in October.

Dior CEO Pietro Beccari told AFP that the fashion house had chosen the pyramids as much more than “a useless background”, drawing inspiration from Egyptian astrology for the collection named “Celestial “.

Before that, American pop groups Maroon 5 and the Black Eyed Peas performed at the Giza Necropolis, where contemporary art was also recently featured in the latest Art from Egypt exhibition.

The modern cultural push is a new direction for the image of Egypt.

Long a cultural powerhouse in the Arab world, with hugely popular singers and movie stars, especially during its heyday in the 1950s-70s, Egypt set its sights on its ancient heritage to once again attract attention of the world.

A harbinger of the new embrace of ancient culture and history last year was a “golden parade” of 22 pharaohs who marched through Cairo from an old to a new museum in a great carnival-style spectacle.

It was part of a push by President Abdel Fattah al-Sisi’s government to revive tourism, which accounts for 10% of GDP and some two million jobs, but has been hammered by political unrest, economic upheaval and the pandemic. of Covid.

Big brands like Dior “come in on a huge budget”, employ local talent and “support young designers who can put Egypt on the global fashion map”.

Iman Eldeeb, whose agency chose two Egyptian models for Saturday’s show, told AFP it was a “long-awaited step for the fashion world in Egypt”.

Egypt’s luxury goods sector has grown despite years of economic turbulence that saw the pound lose half its value during a currency devaluation in 2016.

Despite the recession, Egypt, the most populous country in the Arab world, is home to 86,000 millionaires, according to bank Credit Suisse.

Shops in malls in Cairo’s chic new satellite towns, she said, are “up to the standards of international luxury brands”.

Egypt’s super-rich bubble has helped create a local fashion design scene whose pioneers have recently ventured onto the catwalks of Milan and Paris.

It was a rare achievement for Egypt’s creative sector, where “most people are self-taught, working hard with limited resources to try to meet international standards,” said Othman, the photographer.

Ismail said the country’s luxury apparel and jewelry market “has grown from less than 100 Egyptian brands to over 1,000 today”, fueled by “a huge pool of young creative talent”.

International events offer rare exposure, but bringing them to the country remains a challenge.

“It’s a big step for the government to authorize Art d’Egypte and Dior to organize events at the foot of the pyramids,” exhibition curator Nadine Abdel Ghaffar told AFP.

Bureaucracy and strict restrictions can still get in the way, she suggested, conceding that “the legislative framework is complicated”.

But “promoting the country’s culture” must be a priority, added Abdel Ghaffar, who believes a dedicated government body could better promote exhibitions, concerts, shows and even film production.

Shehab, the art historian, said many realize that Egypt, known for its timeless architectural marvels in the desert, needs to project an updated image of itself.

“There is growing awareness of the need for soft power and culture as a representation of the country,” she said, warning, however, that Egypt still needs “better infrastructure “for that to happen.

She even dared to dream that Egypt could attract Hollywood productions, if only it started granting permits.

“There are countless international productions that have resorted to filming in Morocco, Jordan or Saudi Arabia,” she said.

The latest Egypt-themed production was a Disney+ TV miniseries, Marvel Comics’ “Moon Knight,” for which two entire city blocks in Cairo were built from the ground up – on a set in Budapest.