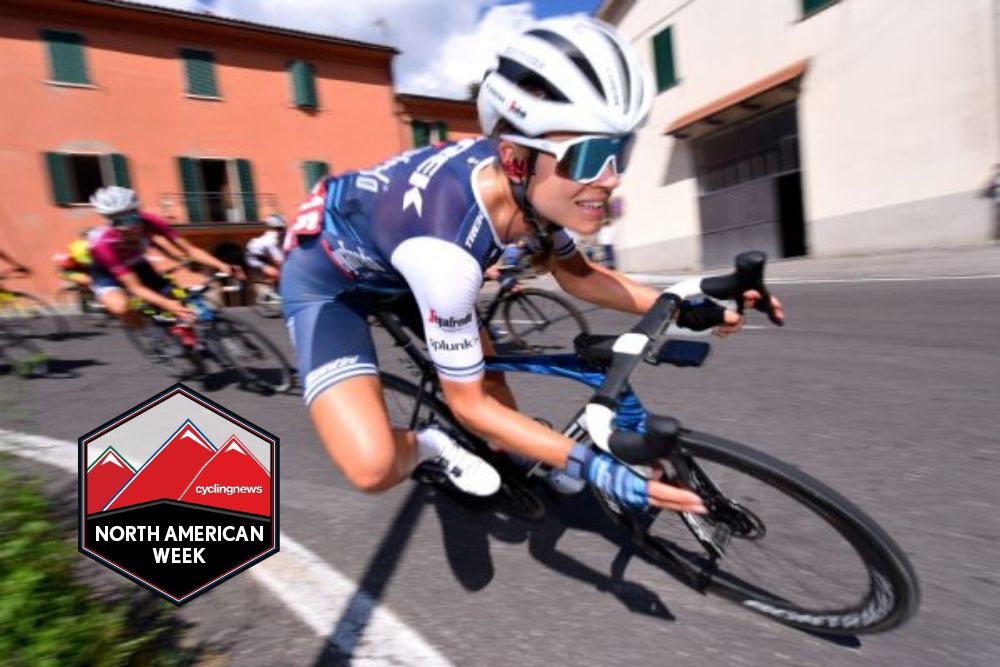 It has been over a year since a professional race was held in North America, and runners from the United States and Canada have had a distinct disadvantage compared to their European counterparts. This week, Cyclingnews is shining a light on the runners and their journey through the coronavirus pandemic, the continent’s salient issues and the races that are making the scene. Tayler Wiles spoke to Cyclingnews from Camp Trek-Segafredo in January, shortly after “ cross racer Justin Laevens turned gay.

From growing up in Utah surrounded by a conservative Mormon culture to living in the Bay Area as an openly gay professional cyclist, American Tayler Wiles has forged her own unique path through life and sport. Cycling spoke with the Trek-Segafredo runner about her hopes for gay runners in the men’s peloton, pandemic-era cycling and the changing Olympic dream.

Tayler Wiles and her partner Olivia Dillon have been the subject of numerous articles, they have been called one of the coolest couples in cycling. Although their relationship was the first same-sex encounter for the two, they became an example of the power of love to overcome obstacles and inspire others.

The two met ten years ago when they were teammates on an elite amateur team in California and have been together ever since. As Wiles’ career in the pro peloton takes her across the globe, Dillon’s role at clothing company Velocio allows him to work remotely and join Wiles in Europe for extended periods – much like spending time many married couples in sports.

But it’s not quite the same for the men’s peloton: there are no openly gay WorldTour riders and when a U23 cyclocross Justin Laevens came out it made headlines.

“I felt very lucky to participate in women’s cycling because it’s so common,” says Wiles. “There are a lot of gay women in sport and I’ve always had teammates who were gay. I felt like it was such a nice environment to hang out.

“I hope it becomes more open and welcoming in the men’s peloton because it’s really a very pleasant environment in the women’s peloton. I’m happy to see that it starts to get easier, even if it’s little by little. small.”

Gay men may perceive that sport is not part of their culture or that the macho culture of professional sports excludes them, but Wiles says she hopes the culture changes.

“There aren’t a lot of men’s sports where you see a lot of outdoor athletes. In women’s sports it’s a lot more common. It’s a lot of that macho male stuff that men learn when they’re. young people, they are a bit beaten – don’t be vulnerable, don’t show weakness – being feminine at all would be the worst thing there is.

“I think the culture is slowly changing just because of the way people are raising boys now, it’s not quite where we need it, but teaching men from a young age that vulnerability is. OKAY. I think this is the way to go.

“But now the tough macho stuff is alive and well – I can tell you that because we have a men’s team.”

Wiles missed the selection for the 2016 Olympic Games team despite her overall victory in the Tour de l’Ardèche 2015 and being the best climber at the head of an Olympic hilly road race and time trial accomplished. She entered the 2020 season in great shape in hopes of winning the eye of the Olympic selection committee so that the pandemic suddenly stopped.

She entered the year with a podium in the Torquay Race after helping her teammate Ruth Winder win the Santos Tour Down Under, and finished close to the podium in the first WorldTour race, the Cadel Evans Great Ocean Road Race. . She then headed to Belgium to prepare for the Classics but one race later, the start of the season was over.

When the race stopped, Wiles left his base in Girona and headed for California, but by mid-summer the races resumed. But after months of avoiding contact with people and wearing masks, she said getting on a plane was a shock.

“We had all been home for three months and COVID-19 was at its peak and it was really weird. That first flight was super scary and, yes, it doesn’t feel comfortable anymore. Just being with all these people – it’s a strange world that we live in. “

The team thankfully avoided anyone becoming infected and had an extremely successful season, with Lizzie Deignan winning the World Cup overall, Liège-Bastogne-Liège, La Course and GP Plouay, and the team winning the counter- the Giro Rosa team watch. But Wiles has struggled to do without some of the smaller breeds to perfect his form and get results that lift his spirits.

“It was all we could do to make it through the end of the year and it was always great fun being part of the winning team too. So I was very happy with what we did with the season, ”she said. .

“It was really stressful coming back after the break not knowing where our form was and I think we all really came together and ran each race like it’s the last because we just didn’t know what was going to happen.

“I think we’ve come together really well and the team, the staff have been really great to support us during this crazy time and make us feel safe through everything you know, the coronavirus protocols and all that. . And I think we were lucky enough. To make it to the race so I think we just took advantage of it and had a really good season, actually. “

This year seems to be starting again with uncertainty: Wiles’ first race, the Setmana Ciclista Valenciana, has been canceled and she finds herself in wait-and-see mode again.

“It’s kind of Groundhog Day – are the races going to be held? Are the Olympics going to be held? I think we’ve all learned to be adaptable and go with the flow. I always try to do my best, so we just have to take it day to day. “

Wiles now hopes to start with a series of one-day races: Strade Bianche, and the three Ardennes Classics, Amstel Gold, Flèche Wallonne and Liège. Now that Itzulia’s new women’s race has been postponed, the rest of the schedule is “in the air”.

“I still don’t know about our national championships, I haven’t heard anything from it. This part of the season is still unknown.”

What is certain is that when the race starts the new balance of power, with Annemiek van Vleuten moving to Movistar, Marianne Vos leading the new Jumbo-Visma team and double SD Worx team from Anna van der Breggen and Trek-Segafredo largely intact will make the race more dynamic.

“I think the peloton is really more evenly distributed right now with the talent, so I think the race is going to be really exciting. Five years ago there were five riders who could win a given race, now this number is much higher. It makes racing super exciting. With Annemiek gone, I’m excited to see what Spratty can do, spread his wings and be a leader in this team. Vos is still a force. SD Worx still has a team super strong, so I think it’s gonna be a really fun season. “

The season just needs to start, and it depends on what’s going on with the coronavirus. “When this first happened I didn’t know anyone who had it and now almost every member of the team knows someone or has a family member. [who’s been infected]. So it seems like it’s sort of a shutdown, which is a little scary, but hopefully you know the rear rollout continues and things start to improve. “

Walheim: How to Build the Best Foundation (Tips and Tips)