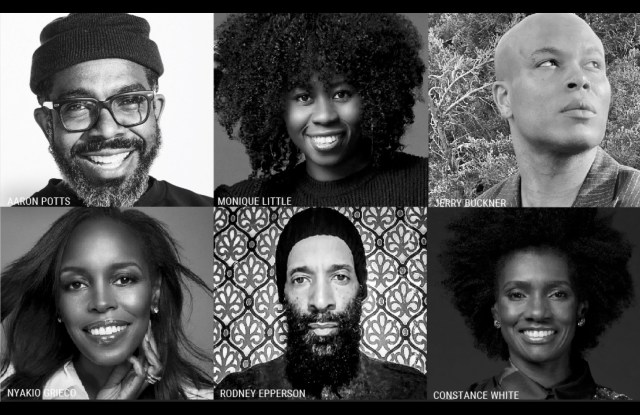 There’s a lot going on in fashion when it comes to the inclusion of black creatives – there are the challenges of securing funding, the issues with the role of American businesses in diversity, the risk of being labeled as a as a Black Creative and to fight for continued support for Black Owned Businesses.

At Fashion Group International’s Rising Star Dialogues event on Tuesday, the goal was to unpack some of these questions.

The event was held in honor of Black History Month and featured Aaron Potts of Apotts, Jerry Buckner of Jerrimiah James, Monique Little of You Go Natural, Nyakio Grieco, founder of Nyakio Beauty and Thirteen Lune , and Rodney Epperson of Epperson. Writer and author Constance White moderated the 75-minute discussion. All of the panelists were recognized by FGI as rising stars.

As White noted, less than 1% of venture capital funding goes to black-owned businesses and it could even be lower in the fashion industry, she said. As to whether interest in black-owned businesses will continue beyond the present moment, Potts, for his part, has gone for self-funding, but is open to other funding and aims to build a brand. legacy connected to Blackness, like Willi Smith and Patrick Kelly.

In response to White’s question as to why there hasn’t been a black luxury brand that has been doing well since Smith or Kelly, Buckner said, “The problem of guilt and doing just enough to a particular group of people is just enough to keep people quiet. This is the biggest problem. There is a problem with providing equal opportunities for all. Until the system is dismantled and we are simply examined on the basis of our talents, gifts, and abilities, there will always be a lack of proper representation when it comes to everything, not just sustainability and sustainability. fashion from the retail point of view, but also cosmetics. , the creators that you have – in all sectors. “

Without adequate funding to follow the standard manufacturing route, Little said starting her business required hiring local seamstresses and having them make the product to order. This allowed her to provide opportunities to others in the community who otherwise might not have been able to work away from home. Now, with 30 to 40 employees working at a new facility in Texas, Little says many of them are learning how to make clothes.

“While it was a challenge for us, the way we created solutions also added to the tapestry that we are building. It’s a very beautiful thing, ”she said.

Potts addressed “the resounding question of funding,” but said the biggest obstacle was in his head. Having been a career designer at other companies before starting his own, he said, “I worked so hard on what the merchandising plan should look like, what the salespeople were saying, the evolution of what was saying. your boss. I realized that when I started my own brand, I had to separate myself from this kind of thinking. The promise I made was that creativity would drive this brand.

In the process of finding funding, Little described the challenge of convincing investors who may not understand that the market for pre-tied headbands exists, as it is a “fashionable and functional product that meets the eye. to the needs of black women ”. After five years in business, people often don’t believe the numbers, she says. “It’s definitely a cultural disconnect.”

Sometimes there is also a disconnect on the sustainability side.

“There is this idea that people who care about the planet and the impact of fashion on the planet don’t necessarily look like me… the images I see are of men or women, who are white or complexion. clearer, ”Buckner said, noting that sustainability isn’t marketed to people of color, his research shows.

Having just completed a pre-seed fundraising round of friends and family, Grieco is now in charge of the seed augmentation. Although the world has changed since the Aughts, she said much of the language used in the VC spectrum has not changed.

“I still get a lot of the same hindsight. There is still this need to keep this old paradigm. The VCs are in charge and they look at the opposite of me – white men, who often funded other white men. Even with their diversity dollars that are meant to help change the narrative and help build generational wealth, those dollars are still being held pretty tightly, ”Grieco said. “Fifty-one percent of babies are multicultural. In 2041, these babies will be adults and they will look like us.

Encouraged by the non-traditional thinking going on in some of the bigger banks, family offices, smaller funds, women-led funds and unions made up of black and brown people, Grieco said she was also hopeful about financial literacy taught in different communities. Little or no investment in black owned businesses will not work, as blacks and Maroons have “incredible purchasing power, specifically in beauty.” Latinx, Latina, Black – we buy more beauty than anyone, ”she says.

There appears to be a more concerted effort to hold business accountable and support black-owned businesses. The Black Dollar Index, launched Tuesday, is a consumer index that scores companies based on their investments in Black America – from recruiting practices to supplier diversity.

“Everywhere, we are a people of needs, [that] have not been met, ”he said. “If that means broadly supporting people of color, I’m happy to meet that need.”

From Epperson’s perspective, the industry should also be wary of breed-ranking designers.

Adding to that, Potts said, “It never really scared me to be considered a black or black designer because I know what I produced has been on the backs of people of all shapes and colors. , sizes. I try to come from a place in my heart where I just talk to people and connect with people – no matter what they are like. My brand is really rooted in this idea of ​​inclusion, acceptance and self-acceptance… but it was very important for me to show a high vision of Black style and beauty. The world was inspired by Blackness in a way that many people, who consume [fashion] doesn’t really realize.

LIVE: NDHSAA Boys Hockey Quarter Finals and How to Watch Other Matches

New data from Pfizer shows vaccine can be stored at warmer temperatures, which could benefit vaccinated rural communities