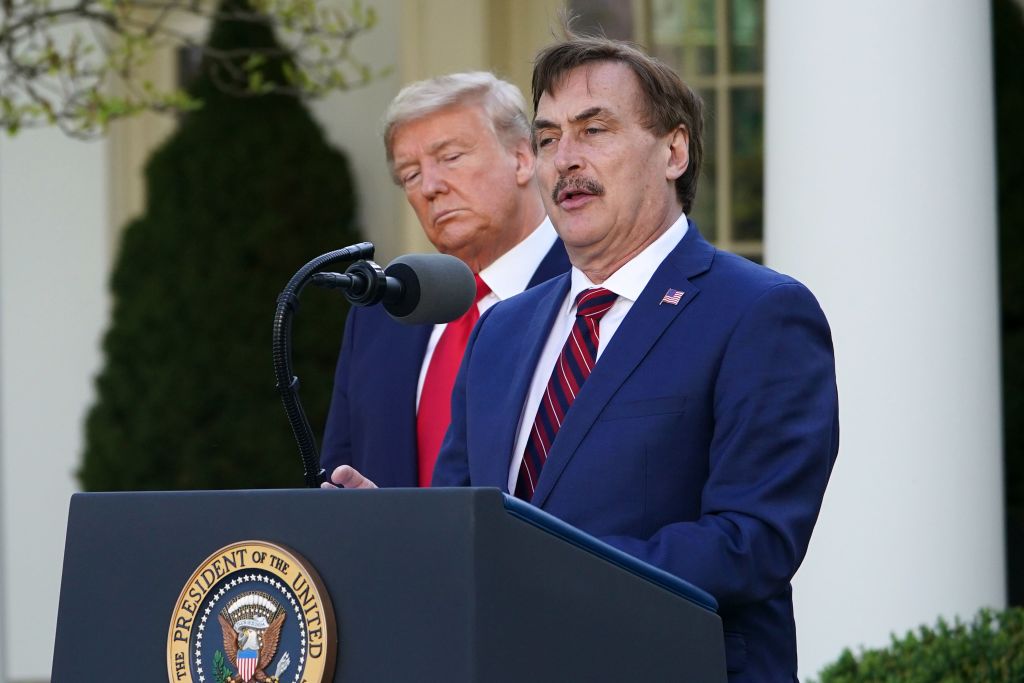 MyPillow CEO Mike Lindell believes his connection to former President Donald Trump came from “divine appointments,” suggesting he is on a god-backed mission to overturn the 2020 election results.

The staunch Trump loyalist and conspiracy theorist has spent the past few months posting videos touting debunked and baseless allegations about President Joe Biden’s victory over Trump in November. Lindell has traveled across the country to speak at pro-Trump events, saying he has evidence to back up his claims.

In a speech at the Health and Freedom Conference in Tampa, Florida on Friday, the controversial businessman praised the “divine” way he was presented to the former president.

“Divine things started to happen to me … I was chosen from 12 people to pray with [former 2016 Republican presidential candidate and Trump’s former Secretary of Housing and Urban Development] Ben Carson in a room at the National Prayer Breakfast, ”Lindell explained.

He remarked that “this prophet, he said, ‘You two of you in this room are going to become great friends and change – and help change the course of history.

Lindell said this happened when Carson was still running for president. “Either way, those divine appointments continued right up to where I met Donald Trump in the summer of 2016.” The audience started to applaud when the CEO of MyPillow made the remark.

MyPillow CEO Mike Lindell believes “divine appointments” led him to former President Donald Trump. In this photo, Trump listens to Lindell speak during a daily briefing in the Rose Garden of the White House in Washington, DC on March 30, 2020. MANDEL NGAN / AFP via Getty Images

Moving forward in his story, Lindell said he had a “divine date” on August 15, 2016 when he met Trump one-on-one. “It was just him and me,” recalls the businessman.

He said he left the meeting believing Trump would be “the greatest president in history.” The audience then applauded loudly.

At Friday’s event, Lindell again claimed he had evidence of how the votes were reversed in the 2020 election – a claim that has already been refuted by audits and manual recounts in the main states of the battlefield. The Trump loyalist has said he plans to hold a “cyber symposium” at the end of July that will clearly show how the election was rigged. He claimed that the Supreme Court would then overturn the election by a unanimous decision and that Trump “will be in power by the fall.”

Although Trump, Lindell and other supporters of the former president continue to claim that the 2020 election was “rigged” or “stolen,” there is no evidence to corroborate this extraordinary claim. Dozens of election lawsuits filed by Trump and his allies have failed in state and federal courts. Even judges appointed by Trump and other Republicans have dismissed the often bizarre allegations.

Meanwhile, audits and recounts in battlefield states, including places where the election was overseen by pro-Trump Republicans, reaffirmed Biden’s victory. Former United States Attorney General William Barr, who was widely regarded as one of Trump’s most loyal cabinet officials, said in December that there was “no evidence” to corroborate the claims widespread fraud.

Additionally, the Department of Homeland Security’s Cybersecurity and Infrastructure Security Agency described the 2020 election as “the safest in American history.”

But Lindell, along with pro-Trump lawyer Sidney Powell, continues to claim the election was stolen, mistakenly suggesting that Trump can simply be “reinstated” as president. According to the New York Times, Trump has told associates he believes he could be reinstated later this year. This is not legally possible and the allegations of widespread fraud are unfounded.

Conservative Evangelical Christians, like Lindell, were a key base of support for Trump. Polls after the 2016 and 2020 elections showed that about 8 in 10 white evangelical Christians voted in favor of the former president. Many self-proclaimed Christian “prophets” continue to promote baseless conspiracy theories about the 2020 election – with many suggesting that Trump will somehow return to power later this year.

Newsweek contacted Trump’s press office for comment, but did not immediately receive a response.

Imran Ismail: From volunteer to governor of Sindh – News