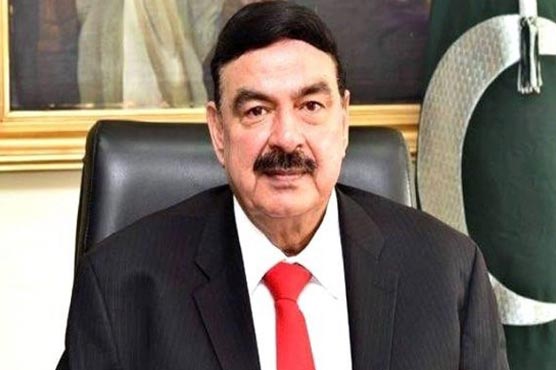 The National Assembly resumed its session in Parliament in Islamabad on Saturday under the chairmanship of President Amjad Ali Khan.

The interior minister said eighty-eight percent of the work to close the border with Afghanistan has been completed while the remaining work will soon be.

The interior minister said Prime Minister Imran Khan had made all possible efforts to improve the economic situation. He said it goes to the prime minister’s credit for starting work on the Dasu and Diamer Basha dam projects. He said the projects will not only irrigate our lands, but also provide cheap electricity.

Regarding his ministry, Sheikh Rashid said that we are introducing e-passports while online visas are now being issued. He said that NADRA offices will be established at each tehsil headquarters to facilitate the people.

The National Assembly continues the discussion on the budget for the next fiscal year.

Participating in the debate, Abdul Qadir Patel said that the growth figures presented by the government for different sectors of the economy are not based on facts. He criticized the government’s policies, saying they led to inflation and unemployment.

Niaz Ahmad Jakhar said it was the first time that a tax-free budget had been presented. He said the greatest effort had been made in the budget to provide relief to the masses. He said it was also unprecedented for interest-free loans to be given to oppressed segments of society. He said the government had put the economy on a sound footing and the situation would improve further in the days to come.

Khurram Dastagir said there is a significant increase in the prices of basic commodities including flour, sugar, pulses and ghee under the current government. He said there will be more inflation as a result of the new budget.

Shehryar Khan Afridi said Prime Minister Imran Khan has taken initiatives to protect vulnerable segments of society. He said the 2021-22 budget is for the common man. He said he is considering a proposal to give technical training to individuals from poor households. He said that it is the current government that has attacked the mafias in different sectors. He said Pakistan is now open and the global perception of the country has changed now. He said the economy is improving, with Pakistan’s stock market witnessing historic trading.

Mohsin Dawar said the 20,000 rupee minimum wage announced in the budget is not enough and should be reviewed. He said the promises made for the development of tribal districts should be kept.

Raja Khurram Shahzad Nawaz praised the government’s finance team for presenting a people-friendly budget amid the predicament posed by Covid-19. He said relief was given to different sectors including farmers and industrialists within the budget.

Nawabzada Iftakhar Ahmed Khan Babar called on the government to establish a university in Muzafarrgarh district. He also called for an increase in allocations for the health and education sectors.

Shaheen Naz Saifullah said Prime Minister Imran Khan is an honest person who has raised a strong voice against corruption. She praised the measures taken for the promotion of tourism.

Sajid Mehdi said research should be encouraged and subsidies should be given to farmers for fertilizers to boost agricultural productivity.

Rukhsana Naveed said the PTI government is making sincere efforts to lift the economy and improve the country’s image. He said that despite Covid, the economy has grown by around four percent in the current fiscal year. He said that the budget for the next fiscal year contains measures aimed at improving the standard of living of the people.

Khurshid Ahmad Junejo said the budget provides no relief to low income groups, only to the upper class.

Mehboob Shah appreciated that the government is focusing on the development of backward areas. He regretted that these areas had been neglected by previous governments.

Zahra Wadood said the PTI government has failed to deliver on promises to build homes and create jobs.

Rana Muhammad Qasim said government initiatives to uplift the weaker segments of society are welcome. He said the incentives given to the IT sector will help boost the country’s exports. He proposed that employee wages and pensions be further improved.

Ghulam Ali Talpur called on the government to significantly increase allocations for the agricultural sector, saying this would help boost the country’s exports. He said the construction of the Hyderabad-Sukkur highway should be a priority.

Fazal Muhammad Khan said the Sehat Insaaf card is an important government initiative, but suggested that drugs should also be provided free of charge to holders of these cards.

Nadeem Abbass said the PTI government failed to keep promises it made to the people before the election.

Sardar Riaz Mehmood Khan Mazari called on the government to launch a strict operation against the dacoits in Rajanpur.

Salahuddin Ayubi said that the work on the dualisation of the Chaman-Karachi road should be started immediately, saying that this project is of great importance for the business activity.