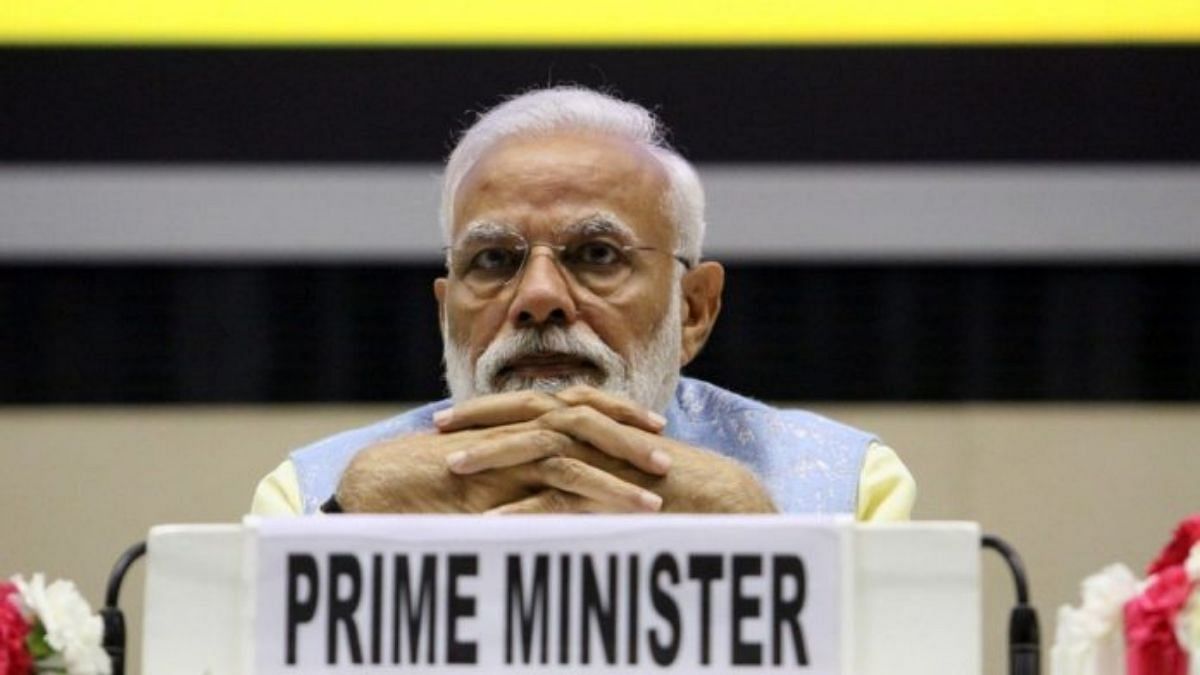 New Delhi: Although few can imagine this today, a socialist leader and a Rashtriya Swayamsewak Sangh (RSS) pracharak gathered once in a clandestine place with great warmth and deep concern for the well-being of everyone, and then congratulated each other for the work they were doing for the common cause of saving democracy, under extremely adverse circumstances.

The two leaders were George Fernandes and Narendra Modi and the meeting took place during the emergency.

Fernandes, who died in January 2019, was known as a leader and went on to hold significant portfolios in non-congressional governments. Modi, meanwhile, became Chief Minister of Gujarat in 2001 and has been Prime Minister of India since May 2014.

A detailed account of the meeting is present in a first-hand account of the Emergency, written by Modi in his first book. Titled “Sangarshma Gujarat”,the book is in Gujarati and was published in 1978 after the state of emergency was lifted.

Then Prime Minister Indira Gandhi imposed the emergency in India at midnight on June 25-26, 1975, which lasted 19 months.

The Opposition was imprisoned and the RSS, which led a movement against the Emergency, was banned. Its leaders and thousands of executives were put in prison.

However, several pracharaks escaped arrest and went into hiding to continue this struggle to save democracy. Modi, who was stationed in Gujarat at the time, was one of them.

Modi detailed the underground movement in Gujarat in his book and also gave some interesting anecdotes about his own role.

He has worked closely with leaders like Fernandes, helped provide support to the families of those arrested, and played a key role in the printing and distribution of banned literature against the government and the emergency in Gujarat, Madhya Pradesh, Rajasthan and Maharashtra.

In his book, Modi mentioned that he was using a pseudonym and that he was about to be caught on several occasions by the police, who were constantly looking for him.

He had to wear different looks like that of a saint or that of a Sikh to hide his true identity from the police and the establishment.

Read also : Nehru vs RSS-backed Organizer: a battle that hampered our freedom of expression

Describing his dramatic encounter with George Fernandes, who was a key leader of the underground movement at the time, Modi writes: A yellow Fiat car pulled up near the door. A person came out. He had a huge physique, wore a crumpled kurta, had a green bandana on his head, a print tahmatand a watch with a golden chain on the wrist. He was dressed as a Muslim mystic with a thick beard on his face and was called “Baba”.

He added: “With that Fernandes entered. At that time, it was also a joyous occasion to meet colleagues associated with wrestling. We hugged and congratulated each other for continuing the fight with perseverance. I shared with him the information about Gujarat and other provinces that was available with me.

After that, Modi added, “I was in constant contact with Mr. George, I also introduced him to Nanaji (Senior RSS pracharak Shri Nanaji Deshmukh).

Nanaji was a key leader of the movement against the Emergency. He was the secretary of Lok Sangharsh Samiti, a common forum for all who opposed the Emergency.

At the time, the government was desperately trying to find Fernandes and Nanaji.

Describing the early days of the turmoil, Modi wrote: “Sangh’s office was the home of us pracharaks. On July 4, the Sangh was banned and its offices were occupied by the government. Therefore, myself and Shri Keshavrao Deshmukh, the pracharak (provincial) of Sangh’s Prant, stayed with Shri Vasantbhai Gajendragadkar (a senior pracharak).

Read also : RSS does not manage the BJP remotely, it is not a school principal who regulates the leaders of the BJP as students

In Maharashtra, Madhya Pradesh and Rajasthan, underground literature that was distributed against the emergency was mainly printed in Gujarat.

Explaining how this was done, Modi wrote: “Shri Kishanbhaiya, an underground pracharak of the Sangh, came to Ahmedabad from Rajasthan to publish literature on behalf of Rajasthan Lok Sangharsh Samiti. this task of getting two lakh copies of a magazine printed in Hindi and sending them to Rajasthan was quite a challenge.

“Jana Sangh’s organizing secretary, Shri Nathabhai Jhaghda, and I started to look for a suitable press for this job. It was hard to find such a press in Gujarat that could print such a large amount of literature in the Hindi language. ..after two days of continuous research, a newspaper owner accepted this job. We sighed with relief and thought that once these copies were printed, we would decide on the future course of action to follow, ”he added.

“The copies have started to be printed. Two copies of lakh stacked up. Once these copies were ready, they were carefully stored in four different locations in Ahmedabad, ”Modi wrote.

After that, two workers from each district of Rajasthan came and carried these magazines in their empty bags. When the printed copies were distributed in Rajasthan, police continued to conduct statewide raids to find the press where these copies were printed.

Referring to another episode, Modi wrote about how some of the pracharaks was arrested because of these raids.

“Shri Navinbhai Bhavsar, one of our associates in the underground movement has been arrested. Police raided Mr. Navinbhai’s home as soon as important letters related to the clandestine struggle arrived in the mail. Along with them, Mr. Parindu Bhagat, Mr. Govindrao Gajendra Gadkar and Mr. Vinod Gajendra Gadkar were also taken into police custody. All were carefully questioned. The name of the sender on the letters was “Prakash”. (Prakash was my pseudonym). The government has also learned of the existence of the holder of this name, ”he wrote.

“Now all of the people who were arrested have received various types of threats to get more information about the sender of these letters,” Modi added.

The police tried many tricks, but these people did not give any information to the police.

Interestingly, while the foreword to the book was written by RSS mainstay Dattopant Thengadi, Modi wrote about a page and a half talking about the book at the end of Appendix 4.

In this article, Modi said, “This is my first book. I wrote this book not as an author, but as a soldier of war, as a key to some tough questions about underground warfare that have remained unanswered so far.

(The author is Research Director for Delhi-based Think Tank Vichar Vinimay Kendra. He is the author of two books on RSS. The opinions expressed are personal.)

Read also : How Karl Marx’s grandson fought for Savarkar against the British at the International Court of Justice

Google’s report of its relationship with scientists linked to Wuhan points to Hilton, one of the “biggest scandals” of our time.