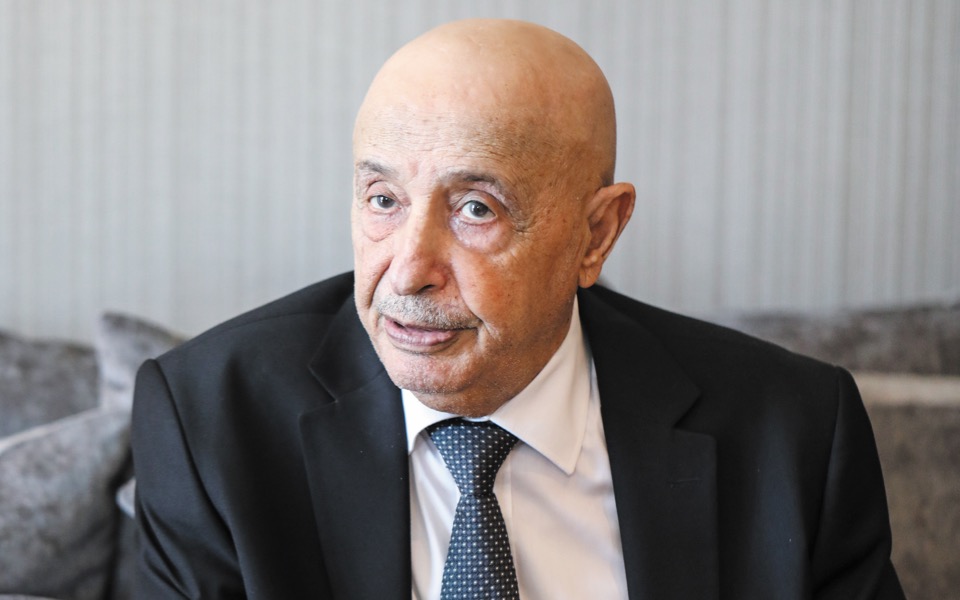 In the aftermath of the second Berlin conference on Libya, the speaker of the Libyan House of Representatives Aguila Saleh Issa, one of the most powerful politicians in the country after the ceasefire and the formation of a government of national unity, went to Athens last week at the invitation of his Greek counterpart Konstantinos Tasoulas.

Aguila Saleh Issa met with Foreign Minister Nikos Dendias and reaffirmed his intention of a new start in Greco-Libyan relations, which had been contested after the previous government signed a memorandum on maritime areas with Turkey.

In an interview with Kathimerini, Saleh reiterates his position that the memorandum between the government of Fayez al-Sarraj and the Turks Recep Tayyip Erdogan is null and void, stressing the need for Turkish and foreign troops to leave Libya. He called on Greek entrepreneurs to invest in the country, noting that the new government will meet all its obligations to Greek and foreign investors.

How do you see the results of the second Berlin conference on Libya? Has he paved the way for a peaceful solution to the Libyan crisis?

I am visiting Athens for the second time in a short time, in the context of the positive relations that are developing between our people and our parliaments. I must underline my appreciation for Greece’s interest in resolving the Libyan crisis, and for its support for legal legislative power in my country. The second Berlin conference did not come up with a new solution. We expected more powerful and clearer decisions. There was, however, unanimous agreement to withdraw all foreign troops and missionaries, as well as to hold presidential and legislative elections on December 24. The Libyan people will choose their president and will elect their representatives to the House on the same day. At present, the highest electoral authority registers all citizens with the right to vote.

The departure of foreign troops from Libya seems to be a thorny issue in the peace process. Turkey, at the Berlin conference, refused to commit to the exit, insisting that its troops are there at the formal request of the legitimate government. What is your position and how do you solve this problem?

We do not accept the presence of any foreign power or military base in Libya, and neither do the Libyan people. The entity that made this deal with Turkey was not elected by the Libyan people and never received a vote of confidence from the House. It was an illegal and unconstitutional government, imposed by the international community without the consideration of citizens. With perseverance, we succeeded in deconstructing this entity of power and instituting a new government of national unity, which received a vote of confidence from the House. Regarding this agreement with Turkey, it has not been ratified by the House of Representatives and is therefore unconstitutional and void. We communicated it to the UN Secretary General.

Are you referring to the Libyan Maritime Agreement (GNA) Turkey?

This is not only the maritime areas but also the security cooperation agreement with Turkey.

Are you optimistic that the election will take place on December 24 as scheduled? Doesn’t it depend on the exit of foreign troops from the country and the creation of unified national security forces?

This is our main request. However, the creation of a unified army requires an elected and legitimate president who will be able to carry out this unification. What I see is that the Libyan people want the elections to take place. There are voices that oppose it because they have an interest. With the support of the Libyan people and the international community, the elections will take place, and it should be noted that anyone who tries to prevent this will face international sanctions.

Greek Prime Minister Kyriakos Mitsotakis visited Libya in April, the Greek Embassy in Libya reopened and the Consulate in Benghazi opened in July. What could be the next steps for the improvement of Greek-Libyan relations and what could be the role of the two legislative bodies?

The relations between Greece and Libya are historically those of good neighbors. We have already formed a Greek-Libyan friendship committee in the House of Representatives. Legislative diplomacy plays an active role for the benefit of both peoples. Our goal is to make the Mediterranean a lake of peace, a zone of commerce, instead of a battleground for the great powers or for neighboring states. There are those who plot to exploit the wealth of other states, but we constantly defend our homeland and our people. Anyone who visits Libya will see artifacts from ancient Greek civilization in Cyrenaica and Apollonia. It was a rich civilization, in political thought, in philosophy, in art, all embraced by the Libyan people. We want there to be an open line of dialogue between the Hellenic Parliament and our House of Representatives. At the same time, we want Greek entrepreneurs to come to Libya. Once our country is stable, with God’s help, it will be a fertile ground for business, especially in the field of construction.

As you know, one of the big obstacles to good Greek-Libyan relations was the memorandum for maritime areas between the previous Libyan government and Turkey. What is your position on this specific issue, and do you think the Government of National Unity will be able to reconsider it?

We have formed an expert committee to study this issue. This agreement was concluded under unsuitable conditions, while the Libyan side was weak. Those in power then needed Turkey’s support. This agreement was essentially imposed on them. Moreover, the man who signed the agreement (then Prime Minister Fayez al-Sarraj) was unauthorized and his government illegal. Our courts have issued orders quashing all actions of the previous government. This issue can therefore only be resolved through proper elections. An elected President and House of Representatives will take into account the interests of the Libyan people, without violating our rights or the rights of our neighbors. No one can impose their will on us, and we will risk everything for our security and stability, and to defend our land and sea borders.

If I understand correctly, the issue can only be discussed after the election.

I believe that whoever deals with this issue should have the political legitimacy and authority to do so, in order to have the power to accept or reject certain things. Sarraj was never able to refuse anything and was forced to sign something that was imposed on him.

* We would like to thank Samuel Bissaras for his role as interpreter in this interview.