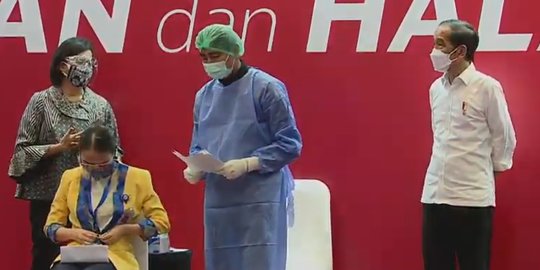 Merdeka.com – Member of the IX DPR Faction Commission VFD Kurniasih Mufidayati recalled President Joko Widodo’s promise (Jokowi) regarding free Covid-19 vaccines to the public. However, what has happened is that the government has in fact sold the Covid-19 vaccine to individuals, as stated in Minister of Health Regulation No 19 of 2021.

“We must ensure that the provision of vaccines is free for the community. This is the promise of President Joko Widodo in mid-December 2020,” Mufida told reporters on Monday (12/7).

He reminded President Jokowi to be consistent with the free vaccination policy. In order to accelerate the national vaccination target.

“This free vaccination policy aims to accelerate the national vaccination goal. Previously, the mutual cooperation vaccination program was paid for by companies and free for employees. We find that the government often changes the regulations, so now paid vaccines are emerging, ”Mufida said.

To achieve the national vaccination goal, there are many challenges. The goal of one million vaccines per day has not been systematically achieved. There are still a lot of people who are not ready to get the vaccine. Mufida believes the government should focus on this rather than opening up a paid vaccine option.

“The existence of a mobile vaccination service at DKI, for example, can be emulated in other areas. Now we have to go to the community. We are chasing time with the emergence of several variants and the Fasyankes are overwhelmed, vaccination needs to be stepped up, “says Mufida

Public participation can be increased to speed up the national immunization program. For example, with the cooperation of pesantren, communities, associations and other community groups. Much remains to be done for the success of the free vaccination program.

“We ask the government not to do business with the people in the midst of this increasingly serious pandemic,” Mufida said.

Notes from the Multi-Account Center

DPR FPKS Vice President Mulyanto suspects that there is a wrong way to infringe on people’s rights, linked to the paid vaccinations performed by Kimia Farma. According to him, the reason for the acceleration of community immunity with a dualist vaccination scheme does not make sense.

“At the end of the day, because free vaccines are scarce, people are forced to take paid vaccines. It is a danger that will harm the population, don’t let people who cannot afford it buy it. this independent vaccine, “Mulyanto said in a written statement received on Monday (12/12/2020).

Mulyanto even compared the price of the independent Covid vaccine, which reached nearly Rp 900,000 for a full dose, with government-provided social assistance during the Rp 300,000 pandemic.

“Social assistance which is Rp 300,000 / month / family is not worth the price of the Sinopharm vaccine, especially if it has to be injected twice for a full dose,” Mulyanto annoys.

Mulyanto also fears that with this paid Covid vaccine plan, the free vaccine quota program will not be increased but on the contrary.

“I’m afraid it will slowly decrease. Even though the vaccine distribution target has been set and the budget has been prepared. In addition, this policy is vulnerable to manipulation by profit-seekers, diverting free vaccines to paid products. vaccines, ”he explained.

Mulyanto stressed that his party rejected the government’s plan for paid vaccines offered by Kimia Farma. According to him, in an emergency, the government should be able to provide free services to everyone. Without even adding to the burden on society.

Mulyanto even pointed out that the reason the government sold the Covid-19 vaccine at a price of almost Rp 900,000 is highly irrational. We know, according to a government statement, that vaccines are sold to accelerate collective immunity.

“It is an irrational reason, if you want to accelerate collective immunity, the government should increase the points of service of vaccination”, he annoys.

He said a number of places could be used as a more massive immunization service, such as puskesmas, clinics, sub-district offices, RW offices and posyandu.

“So it is not easy to open commercial immunization services for some people,” he said.

The certainty of the postponement was revealed by Kimia Farma’s general secretary, Change Winarno, in a short message to Liputan6.com.

“We apologize because the schedule for Mutual Assistance Vaccinations, which initially started on Monday July 12, 2021, will be postponed until further notice,” he said on Monday (12/7/2021).

According to him, the great interest and the many questions that were raised led the Management to decide to extend the socialization period for the Mutual Aid Individual Vaccination or paid vaccinations and the registration procedures for potential participants.

“Thank you for the customers’ understanding and interest in jointly lobbying for faster community immunity (herd immunity) in Indonesia,” he concluded.

“So there is a total of 8 points for each of us to prepare 5,000 doses to see the community’s preparation or animo request,” he explained.

Kimia Farma also plans to expand the coverage of individual mutual cooperative vaccinations, not just in clinics. But certain strategic places such as airports will also be prepared.

Special staff of the Minister of Public Enterprises, Arya Sinulingga, explained that the government will continue to implement a free vaccination program even though there is a paid vaccination service run by Kimia Farma and Biofarma. According to him, the policy is an alternative to accelerate the implementation of the national program of vaccination and immunity of the target groups.

“The free government vaccines are still running. All the free vaccine locations are accessible to the public,” Arya Sinulingga said in her statement here. Jakarta, Sunday (11/7).

“The goal is to speed up the implementation of vaccinations. People have more choices,” Arya said.

Kimia Farma General Secretary Change Winarno stressed that the government’s free vaccination program will not be interrupted even if there is a paid vaccine.

Covid-19 vaccine spokesperson Biofarma Bambang Heriyanto said that individual vaccination in mutual cooperation is an alternative for the community in accessing the Covid-19 vaccine.

“The implementation of this mutual cooperation vaccination is open to any person or party with a history of having requirements as a vaccination health facility,” Bambang said.

Based on government regulations, the vaccine price paid per dose is IDR 321,660 plus the service price of IDR 117,910, so the price per vaccine dose charged to beneficiaries is IDR 439,570 per dose.

Each person receives two injections, so the price of the full set of paid vaccines reaches Rp. 879,140 per person. Kimia Farma will open access to people who wish to purchase the Sinopharm paid vaccine from Monday (12/7).