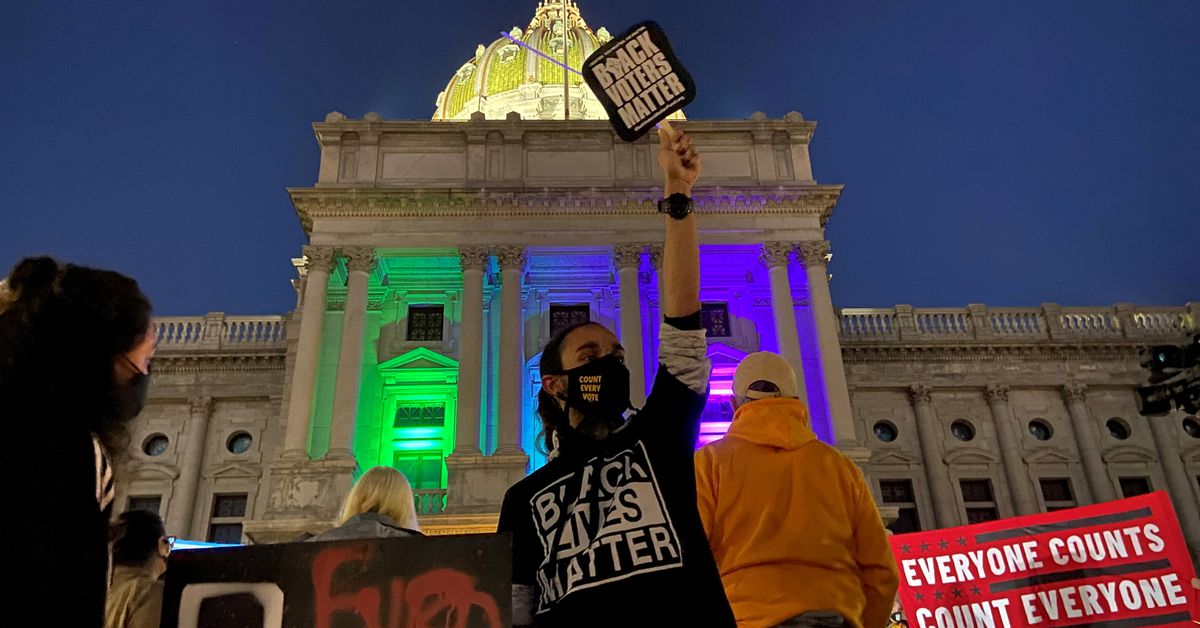 Angel Rivera, a 20-year-old bartender, holds a Black Voters Matter sign during a rally at the Pennsylvania State Capitol Building to protest attempts to stop the counting of ballots cast in the state for the presidential election of 2020, in Harrisburg, Pa. On November 4, 2020. REUTERS / Nathan Layne / File photo

July 12 (Reuters) – Philadelphia could face $ 40 million in costs to replace voting machines if it were forced to comply with a “forensic investigation” into the 2020 election launched by a lawmaker in the Republican state and ally of former President Donald Trump, a city commissioner told Reuters.

The estimate by City of Philadelphia Commissioner Al Schmidt, a Republican, highlights the potential burden on taxpayers of State Senator Doug Mastriano’s attempt to gain access to election materials from Philadelphia and the rest of the world. least two more counties for inspections, similar to the costs resulting from the controversial audit conducted by Republicans of the vote in Arizona.

After Mastriano announced its investigation last week, the Pennsylvania State Department issued a directive to the state’s 67 counties, warning that it would withdraw certification from any equipment turned over to third parties as the chain of custody would be broken. Read more

Democratic President Joe Biden won Pennsylvania by about 81,000 votes, four years after Trump’s victory there helped propel the Republican to the presidency. Republicans in Pennsylvania and other swing states won by Biden continued audits of the November election, repeating Trump’s baseless claims that widespread fraud cost him a second term in the White House.

Schmidt, who has repeatedly defended the integrity of the vote count in a heavily Democratic Philadelphia, said Mastriano’s demand for a wide range of equipment could force the city to replace some $ 30 million in voting machines. and an additional $ 10 million in central programming and tabulation equipment.

“We just received all of our new voting equipment in 2019, so replacing it would be very expensive for taxpayers,” Schmidt said on Monday.

His estimate is higher than that of Pennsylvania Attorney General Josh Shapiro, who said the Mastriano investigation could cost the three targeted counties $ 30 million – Philadelphia, York and Tioga.

Mastriano, who raised his profile among Tory voters in part by touting allegations of Trump’s election theft, did not respond to a request for comment on the cost estimate for Philadelphia.

He said in a statement on Monday that the secretary of state did not have the legal authority to remove electoral machines after third party access or to force counties to pay for new equipment.

Mastriano has given the three counties until July 31 to respond and is threatening to issue subpoenas through the Intergovernmental Operations Committee, which he chairs and which is predominantly Republican. In addition to 2020, he also wants to investigate the municipal elections last May.

Jay Costa, the Pennsylvania Senate Minority Leader, said Democrats would likely take legal action to try to stop the subpoenas. “There could be a significant amount of state and local dollars spent on this unnecessary auditing sham.”

Pennsylvania has previously conducted a so-called risk mitigation audit of the 2020 election involving statistical sampling of ballots. The counties also verified a sample of their votes in accordance with the law. Neither of these efforts resulted in widespread fraud.