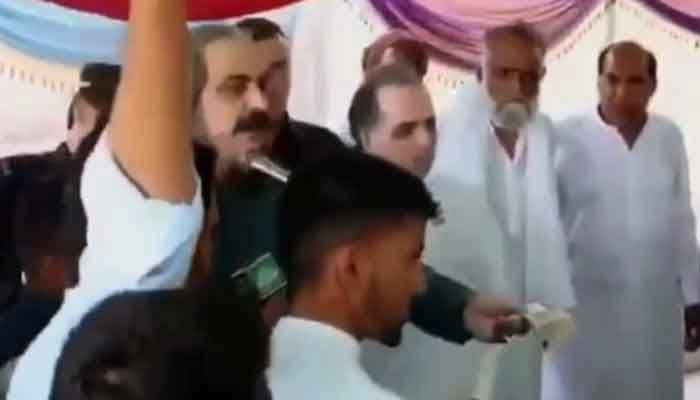 MUZAFFARABAD: Chief Electoral Commissioner of Azad Jammu and Kashmir (CEC), retired judge Abdul Rashid Sulehria ordered the recording of a case against the Federal Minister of Kashmir and Gilgit-Baltistan Affairs Ali Amin Gandapur for donating cash during the party’s campaign for the Legislative Assembly July 25 elections.

According to Geo News, the CEC rejected a report submitted by returning officer Mirpur Dadyal Raja Shamriz and ordered authorities to take action against the PTI minister.

A video of the minister donating cash during the campaign for the July 25 election went viral last week, prompting the CEC to take notice of the matter. He also wrote a letter to Prime Minister Imran Khan informing him of the development and the code of conduct established by the AJK Election Commission.

On Saturday, PTI member Chaudhry Rasib admitted receiving money from Gandapur during the campaign, after which the RO in Mirpur seized the money.

Shamriz had presided over a hearing on the distribution of money by Gandapur.

During the hearing, Rasib admitted to receiving 390,000 rupees from the minister, but said that PTI candidate Azhar Sadiq, who is running for office, had nothing to do with the incident.

The RO confiscated the money, declared the Assembly candidate innocent and sent a detailed report on the matter to the AJK CEC.

Prior to that, the AJK CEC had written a letter to Prime Minister Imran Khan, asking him to ensure that ministers abide by the code of conduct established for the upcoming elections.

Sulehria had asked Prime Minister Khan to give written directives to federal government ministers participating in the elections, as well as the provincial government, to ensure that no individual violates the code of conduct specified by the AJK government.

“It is important to mention that the violation of any provision of the Code of Conduct by any person during a candidate’s election campaign may result in [in] disqualification of the candidate concerned, ”reads the letter.

A video began circulating on social media last week showing Gandapur handing over a large bundle of cash to some supporters of AJK’s LA-1 Mirpur 1 constituency where he had visited in the campaign.

Some people had gathered around Gandapur to complain to him about a badly damaged road. They had told him that they were looking to fix it with what little money they could raise on their own. To this, the Minister immediately handed them a donation, which was videotaped.

Gandapur had also said he was ready to provide additional financial assistance and promised people that the next time he visited the area the road would have been repaired.

There have also been reports of other ministers making promises of various projects in other constituencies during their respective campaigns.

Beijing is struggling to rebuild its image