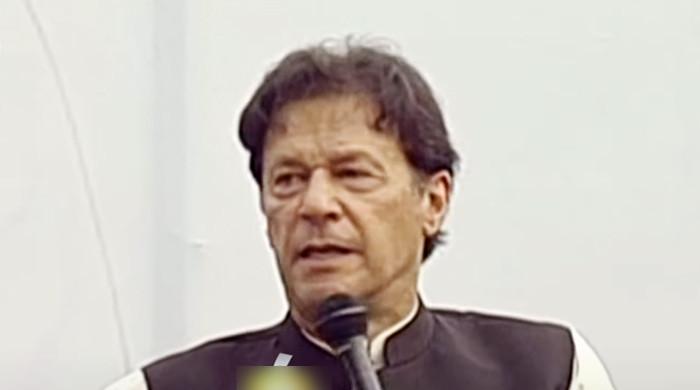 BAGH: A political leader who has assets overseas could never take a stand for the people of Kashmir, Prime Minister Imran Khan said on Saturday.

If I had assets overseas, then even I wouldn’t have been able to say “absolutely not” in the United States, the prime minister said at a rally in the Bagh area in Azad Jammu and Kashmir.

The prime minister, highlighting the importance of the rule of law, said the Prophet Muhammad (PBUH) declared that nations without justice cease to exist.

“No nation can prosper if justice does not prevail,” he said.

The Prime Minister reiterated that the opposition parties were rallying against the government and threatening to overthrow it only to obtain concessions under the NRO (National Reconciliation Ordinance) with the aim of keeping intact the previous system, in which the laws were different for the rich.

“I meet a lot of Kashmiris abroad, especially in Britain. You can ask them if a corrupt person in this country applies for an NRO. No successful nation has different laws for the rich and the poor,” did he declare.

“In no civilized society does a person convicted by the Supreme Court act like they are better than Bollywood stars, provide false medical tests and run away to Britain,” he said. , referring to PML-N supremo Nawaz Sharif who visited London treatment.

The prime minister said that what the PTI-led government was doing for the rule of law can be called “jihad”, as never before in the country’s history have powerful people been held accountable.

Turning to the country’s economic situation, the prime minister said that previous governments never tried to make the country self-sufficient, but the Pakistan of tomorrow would give loans to the poorest countries and refuse to receive aid. .

“The good times are near,” he said.

The prime minister, congratulating the Kashmiris on their bravery, said he would not let them down, become their voice and champion their cause across the world.

“The RSS ideology is a danger not only for Muslims, but also for India,” he added.

Relations between Pakistan and Kashmir are based on Islamic principles, the prime minister said, adding that nations are “always built on ideologies, which helps them understand a cause that goes beyond individual goals.”

“Pakistan was based on the vision of Allama Iqbal and Mohammad Ali Jinnah and I want Kashmiris to be free so that they can live their lives according to Islamic ideology.”

Sharing his vision of a Pakistan modeled after Medina, the prime minister said the Prophet Muhammad (PBUH) was the first person to establish an Islamic welfare state and that the PTI-led government was trying to follow his teachings.

The prime minister said that thanks to health insurance, families can seek treatment in any hospital without worrying about money, as each card provides for the use of 1 million rupees.

Prime Minister Imran Khan said the PTI-led government has launched a new program to provide cheap loans to workers, including mechanics, welders, etc., those who have never been able to ‘buy a house for themselves.

In addition, he said interest-free loans would be given to extremely poor families, so that they could purchase essential items including motorcycles, fertilizers, etc.

“There are two types of business models, the first is ‘trickle down’, in which the people at the top get rich and help those who earn less than them. The other was used by the state of Medina, in which increasing the poor is the priority.

Every person in a family will receive technical training and in today’s world, technical education is crucial because it helps women earn by sitting at home, he said.

The prime minister reminded the people that Muslims have ruled the world for centuries because they have followed the teachings of Prophet Muhammad (pbuh).

“China has done the same, lifting 700 million people out of poverty to become the world’s superpower,” he said.

Madman with Millions of Followers: What Trump’s New Books Tell Us | Books