Katsuji Nakazawa is a Tokyo-based senior writer and columnist at Nikkei. He spent seven years in China as a correspondent and later as head of the Chinese bureau. He is the 2014 recipient of the Vaughn-Ueda International Journalist Award for International Reporting.

TOKYO – The Tokyo Summer Olympics officially kick off on Friday, but the intersection of global sport and politics is already moving towards the 2022 Winter Games, slated for Beijing in February.

Foreign policy experts have circled February 21, 2022 on their timeline. The pivotal date, one day after the end of the Winter Olympics, marks the 50th anniversary of the arrival of US President Richard Nixon in Beijing and of the handshake with Mao Zedong in Zhongnanhai, where Chinese leaders have their offices .

This date in 2022 will reveal how Chinese President Xi Jinping views a landmark decision made half a century ago by Mao, the leader whose power Xi seeks to emulate.

If the United States and China intend to commemorate a summit that transformed the international order after World War II, all preparations must be made before the Winter Olympics. And if no such political event is staged, including a statement by Xi, then inaction would also be striking. 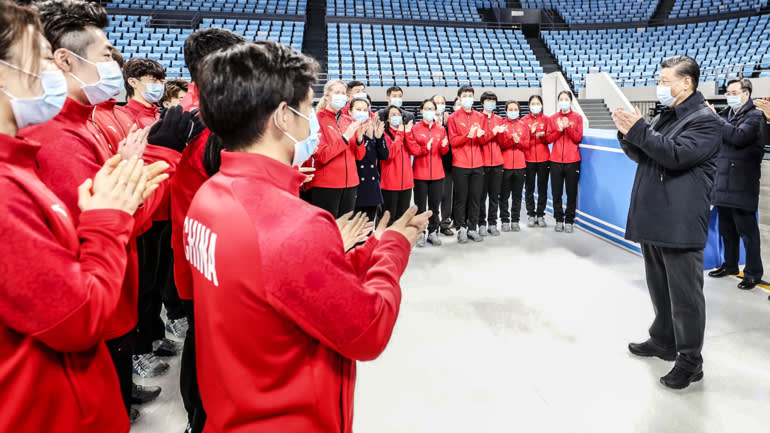 Chinese President Xi Jinping speaks with athletes and coaches during a visit to the Capital Gymnasium in Beijing on January 18. © Xinhua / Kyodo

International tensions are intensifying as the Beijing Winter Olympics approach.

US House of Representatives Speaker Nancy Pelosi called in May for a “diplomatic boycott” of the Beijing Games, citing human rights concerns in China, while the Senate in June passed a bill. law prohibiting federal spending for the participation of US government officials.

The European Union and the United Kingdom have joined the fray, each passing resolutions calling for a diplomatic boycott of the Winter Olympics if the human rights situation in China’s Xinjiang Uyghur Autonomous Region does not do not improve. 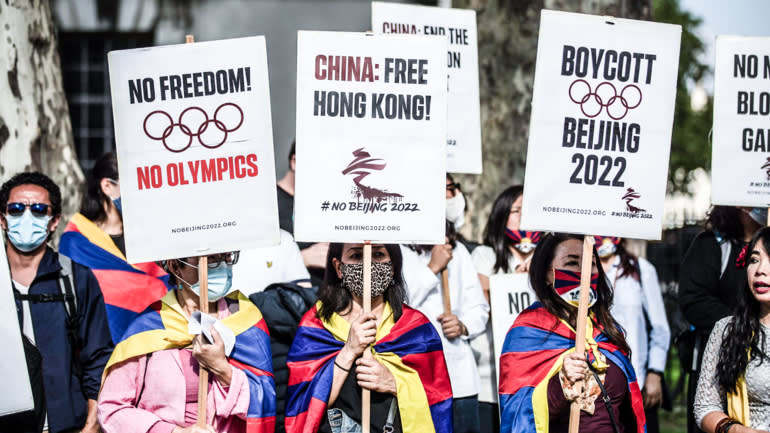 Human rights activists protest in London in June, calling for a boycott of the 2022 Olympic Games in Beijing. Their concerns include China’s treatment of Hong Kong Democratic activists, the Uyghur ethnic group, and the Tibetan community. © Getty Images

Despite the first steps towards a boycott of the opening ceremony due to the Tibetan unrest that erupted in March 2008, many foreign leaders ended up attending the event, hosted by Hu Jintao, then president of China.

Beijing has taken a proactive approach this time around. Chinese media reported that Foreign Minister Wang Yi ensured Russian President Vladimir Putin’s participation in the 2022 Winter Games when he met his Russian counterpart Sergey Lavrov on July 15 in Tashkent, Uzbekistan. For the Russian side, it was an opportunity to turn the tide. Symbolically, July 15 is the day in 1971 when Nixon issued a statement revealing that National Security Advisor Henry Kissinger had secretly visited the People’s Republic of China earlier this month. Nixon also said he would visit China himself the following year.

This diplomatic earthquake was dubbed the “Nixon shock” in Japan because the United States and China did not have diplomatic relations at the time. The secret visit to China in 1971 by left-wing Henry Kissinger, then US national security adviser, paved the way for a rapprochement aimed at countering the Soviet Union. Right, Chinese Premier Zhou Enlai. (White House photo via CNP / Getty Images)

On the 50th anniversary of this historic day, the Russians have given the Chinese their best card: a visit to Putin, when the Olympics are still more than six months away.

The 1971 rapprochement between the United States and China was aimed at countering the Soviet Union. Half a century later, China and Russia are coming together.

From a diplomatic standpoint, China wants to somehow stabilize its relationship with the United States by Nixon’s birthday. The foundation of current U.S.-China relations dates back to the Shanghai Communiqué issued during Nixon’s visit to the country in February 1972. The United States acknowledged in the diplomatic document that “all Chinese on both sides of the Taiwan Strait argue that there is only one China. “

Without denying that Taiwan is part of China under the “One China” policy, successive US administrations have made firm commitments to ensure Taiwan’s security. Any upheaval in this foundation could revert US-China relations to their distant status of half a century ago.

But Washington appears to have stepped up its efforts to defend Taiwan recently. One such signal is the consecutive landings of US military transport planes at Taipei Airport. A US C-17 plane carrying a bipartisan congressional delegation landed on June 6, followed by a US C-146A plane on July 15.

These measures are intended to warn the Xi administration against any action to reunify Taiwan by force.

But Xi himself stressed, in a keynote speech at the July 1 ceremony marking the centenary of the establishment of the Chinese Communist Party, that Taiwan’s reunification with the mainland “is a historic mission and an unwavering commitment” of the party. . The fact that this high-profile statement comes specifically from the Chinese leader means that only Xi can make the decision to change course, if he ever chooses a more conciliatory foreign policy.

As a result, senior diplomat Yang Jiechi’s recent article praising “Xi Jinping’s Thought on Diplomacy” in the July 3 edition of the People’s Daily Party publication sparked various analyzes of what he was trying to convey.

A member of the powerful Communist Party Politburo, Yang oversees China’s foreign affairs. He wrote that Chinese diplomacy has produced great achievements under Xi’s command and practical efforts. It is unusual for the highest diplomat to speak so openly and frankly.

By this logic, it suggests that China’s long-standing “wolf warrior diplomacy” and Yang’s swagger in front of top US diplomats in Alaska in March were under Xi’s auspices.

“While [Yang] seems to praise Xi Jinping’s diplomacy, “said a source who has observed Chinese politics, the diplomat also implying that the responsibility lies with Xi, not him.

What Yang could do, meanwhile, is help Xi extend his rule at the Communist Party’s next national convention in fall 2022. Senior Chinese diplomat Yang Jiechi, center, speaks with his US counterparts during talks in Alaska on March 18. © Reuters

Some say that a certain degree of US-China tension will benefit Xi. If there are more calls within the party for Xi to stay in power as the only leader capable of helping China weather the storm, the president will easily get what he wants in the national congress. .

On July 9, Kissinger attended a video link event marking the 50th anniversary of his own secret visit to China. He was joined by Chinese Vice President Wang Qishan, who also delivered a speech.

China continues to play hard with Washington. Bilateral relations show no signs of improving, in part due to the firm stance of US President Joe Biden.

If there’s anything that gives China any relief, it’s hosting the Tokyo Summer Olympics, despite pandemic unrest. If the Tokyo Games, already postponed for a year, had been canceled, international pressure could have mounted on China over the Winter Olympics.

The Beijing Winter Olympics, in less than 200 days, will serve as a litmus test for the future of Sino-US relations and China’s position in the international political arena. The test also concerns relations between Japan and China, which will mark the 50th anniversary of the normalization of their diplomatic relations next year.

The first in-person summit between Biden and Xi is expected to take place before the Winter Olympics. Will the American and Chinese leaders find common ground there and elsewhere after determining each other’s red lines? Half a century after the Nixon shock, Sino-US relations are at a crossroads.