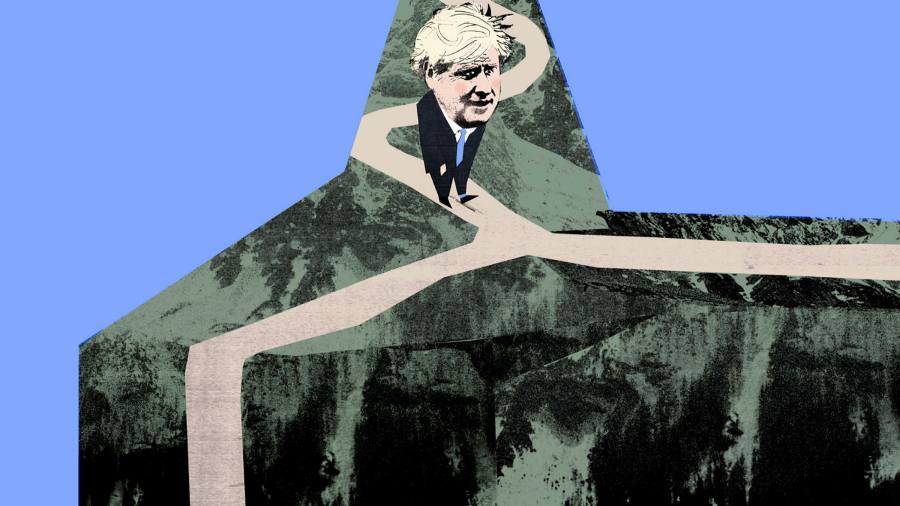 Is it possible that the UK is looking at the last few months as the time when we reached Peak Johnson?

The question may seem strange. Preservatives are reliable and comfortable leading the polls and that of Boris Johnson own assessment is much higher than that of Labor leader Keir Starmer. Given his notorious insensitivity to political gravity, calling Peak Johnson is risky.

Yet there is reason to believe that it can be as good as it gets for the Prime Minister. To be clear, there is a difference between a peak and a drop. A long plateau with only slow erosion of the support is at least as likely as a steep fall. And electoral choices are not made in a vacuum. Voters must also see the opposition as viable. Nothing yet indicates a risk of losing the next election.

Still, the looming challenges mean it’s probably only downhill from here and the issue is less direction and more speed of descent. There are already a few drops in the wind: the missteps on the reopening in England, the defeats in the by-elections, the rapid turnaround of the weekend on Johnson’s plan not to obey the self-isolation rules imposed on them. others who show that he rightly fears that of Labor rules for them ”attack.

There is also the resumption of internal struggles and the counter-briefing in Downing Street, notably against Chief of Staff Dan Rosenfield. Meanwhile, MPs weren’t impressed with Johnson’s supposed ‘leveling’ speech. As the political antibodies to his vaccine success begin to weaken, the political authority he derives from it will also weaken.

Johnson doesn’t need new converts. He just needs to keep the supporters he has, and for most of his tenure he has. But any shift in the polls has implications for policy making. This will make him more risk averse; he may very well delay or dilute decisions that could upset his base or his MPs – increases in fuel rights being an obvious example – and he will be more drawn to issues of division around culture and values.

This electoral calculation is already visible. To the frustration of many allies, Johnson spent no part of his vaccine success political capital to garner support for more difficult decisions, whether it be on green taxes or funding social care. In the words of a minister, “We don’t have the confidence to sell policies”.

And Johnson is embarking on a series of challenges, the most important of which is his bet to end pandemic restrictions in England as cases rise sharply. Images of packed nightclubs on the first night of “freedom” irritate, but surely not surprisingly, its allies. The same is true of the so-called ‘pingedemia’ notifications to self-isolate from the NHS app, which has hampered business and maintained a million children from school. Voters are noticing the inconsistent policies, while libertarian conservatives are dismayed that Johnson is talking about vaccine passports for nightclubs and are ready to resist the new fall restrictions he already portends.

Meanwhile, critics see the unfettered reopening as reckless, putting ideology before data. If Johnson’s judgment works, he and his authority will be cut off. But it’s a huge gamble and if it goes wrong, the drop in support can be dizzying. His approval rating has already fallen last month, even among Conservative voters.

How this plays out will determine the courage of a nervous leader when it comes to other issues, including tax rulings and spending. Johnson has big ambitions as well as a need to tackle aftershocks of Covid like NHS backlogs and lost school hours. But the Treasury is determined to force a prime minister with no appetite for budget restriction, to accept the means to fund these plans. The protracted bargaining over a new levy to fund social care is revealing. He fears new taxes. But there can hardly be a better time to advocate for a levy to fund long-term health and social care costs. The tax should be well judged, but tough sales don’t get any easier than that.

And yet, it is only a difficult choice. Its own net zero program will demand increases in fuel taxes, border carbon taxes and higher energy bills to fund alternative energy sources. But many of his MPs hate green taxes and he does not want to increase costs for consumers. The choice is therefore to agitate them or not to achieve its stated objectives. Something similar was true last week for taxes on sugar and salt to fight obesity. If he supports the target, he is worried about food prices, even if the tax would more likely lead producers to reformulate their offer. Wanting the end but not the means, Johnson’s approach is reminiscent of Woody Allen’s old gag: he’s not afraid of death, he just doesn’t want to be there when it happens.

There is no tribe of Johnsonite loyalists. His position with his MPs is superficial and based on assumptions that he is a winner. The authority gained by the vaccine’s success has helped him stay the course, but if they smell clay again, he will face more rebellions, especially from southern Tories who fear Johnson will overlook their constituents.

As Johnson sees his support stagnate or fall, he will worry more about alienating his existing supporters, more fearful of his own MPs and more suspicious of his ambitious chancellor, Rishi Sunak. Considerations of re-election will take more precedence over good government.

None of this predicts an impending collapse. It may be a long time before the plateau turns into a collapse or before voters see Labor as an alternative. But when he looks back, Johnson may well think he lost an opportunity to do more tough political projects when his own stock was high.