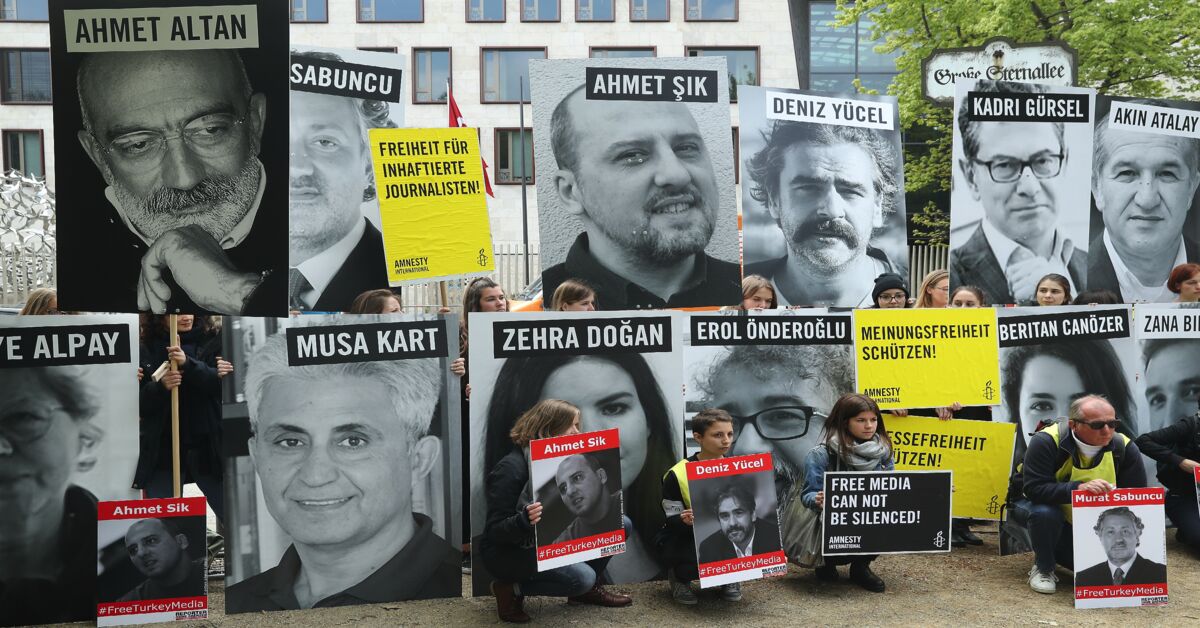 Turkey’s announcement on Wednesday that it will soon regulate foreign-funded media outlets and require them to submit a detailed report on their activities every six months has sparked fierce debate, with critics saying it is a new attempt by the ruling Justice and Development Party (AKP) to gut what remains of the free press.

President Recep Tayyip Erdogan has made his intentions clear in a press conference at the end of a two-day tour of the separatist Turkish Republic of Northern Cyprus, saying: We will take action against the terror of slander. From October, work will be undertaken in this direction in parliament.

Turkey is consistently listed as one of the worst press freedom violators, with dozens of journalists languishing in jail on barely substantiated terrorism charges.

The announcement came amid a smear campaign against independent media that receive financial support from the United States. Chrest Foundation, a private charity.

They include the liberal-leaning Medyascope and Bianet, both online media, as well as Serbestiyet, a platform for more conservative writers. Highly regarded, they are part of a handful of media outlets that provide a critical counterpoint to Erdogan’s multi-million dollar propaganda machine.

Erdogans Communications Tsar Fahrettin Altun said in a statement: We will not allow Fifth Column activities in new forms. New regulations are needed for media operating [with the support of] Foreign states and institutions.

Al-Monitor columnist Kadri Gursel, who sits on the board of Reporters Without Borders, a Paris-based global media advocacy group, said: It’s no secret that most independent media Turks, especially in the digital realm, receive foreign funds to survive. in a media ecosystem characterized by the devastating consequences of the authoritarian pressure of the Erdogan regime.

Gursel added in the comments emailed to Al-Monitor, several tools were used for this purpose. Gaining full or indirect government control over the mainstream media through forced acquisitions has been one of these tools. Another is to financially stifle small but influential independent media outlets by explicitly or implicitly organizing advertising embargoes on them, a method of pressure that is still widely used.

To cope with such financial pressures and in the face of the secular business community’s reluctance to financially support independent media in Turkey, media outlets like Medyascope have appealed to international donors to survive.

The timing of the decision has sparked further speculation that Erdogan, whose poll count is declining mainly due to rising inflation and unemployment, could pave the way for a snap election ahead of their due date in 2023.

Over 90% of Turkish media are controlled by businessmen with close ties to Erdogan. In return for coverage from an army of blatant print and television journalists, their companies, many in the construction industry, are awarded lucrative government contracts.

But several studies suggest that an increasing number of Turks are turning to independent digital media for their information. This, in turn, may explain why the government feels compelled to tighten the noose.

In one march report, the International Press Institute said that with 33.5 million users, the digital reach of Turkish independent media is catching up to the 47.8 million users of pro-government media. The report notes that independent media receives 16.5% more interactions on social media and is closer to breaking through the echo chamber. They dominate pro-government media in almost every dimension, from subscriber growth to viral content, and across all platforms.

He added, for example, they have five times the engagement on Facebook, and they reach a more diverse audience of news consumers on Twitter. “

As such, the bill is a final attempt to kill the independent media which is becoming more influential than ever as government-controlled media become obsolete, Gursel said.

Merve Tahiroglu, director of Project onMiddle East Democracy, a Washington think tank, said the move was part of a wider lobbying campaign spanning foreign-funded NGOs, who are also described as horses of trait for nefarious world forces aimed at undermining Turkey. I think this measure is similar to the recent so-called “NGO” law, which (in addition to allowing the government to replace board members with appointees) also appears to be aimed at putting pressure on non-profit organizations. lucrative that receive foreign funding. Western funded NGOs particularly feel this pressure with increased and arbitrary inspections. And that’s no coincidence, Tahiroglu said in comments emailed to Al-Monitor.

As the United States and Europe attempt to expand their efforts to promote democratization and human rights in Turkey by supporting local NGOs and independent media, Ankara is clearly trying to keep tabs on these activities. and strengthen its control over these institutions, Tahiroglu added. .

One of the government’s most important targets is Osman Kavala, a businessman turned civil society activist who used his family fortune to promote culture and peace between Turks and Armenians and between Turks and Kurds. Kavala has been languishing in a Turkish prison since October 2017 on a cocktail of wacky terrorism charges. His foundation, Anadolu Kultur, is one of the beneficiaries of the Chrest Foundations.

The court reiterated its opinion on December 10, Human Rights Day, declaring Kavalas extended the detention had an ulterior purpose of silencing him as an NGO activist and human rights defender, to deter others from engaging in such activities and to cripple civil society in the country.

Turkey ratified the convention in 1954. The decisions of the European Court are binding on the signatories.

Emmy nominations are in, here are the best dressed shows of 2021 – CR Fashion Book