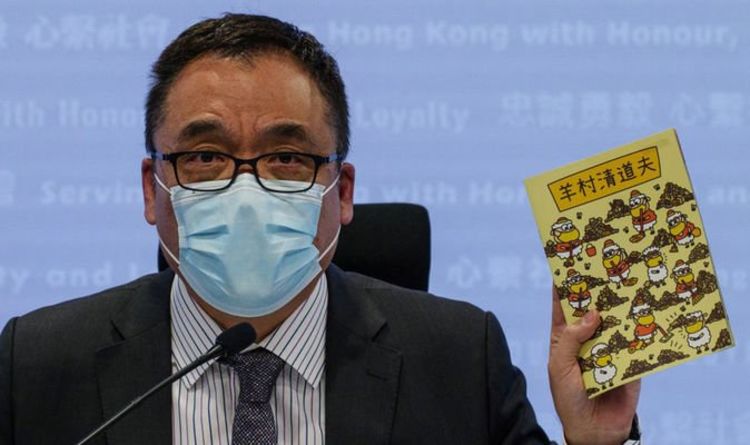 Police have made a total of five arrests so far, with more likely to follow, with an officer claiming the books “poison the minds of children.” Hong Kong National Security Police have rushed at members of a speech therapists union over the books, which they say are intended to show support for the 2019 protest movement while stoking the ” hatred ”towards the Chinese authorities in power.

A total of three men and two women, aged 25 to 28, were arrested, Radio Free Asia reported.

During the raid, police seized around 550 children’s books, brochures, computers and cell phones, arrested the president, vice president, secretary and treasurer, and froze HK $ 160,000 in assets.

The books are a series based on a village inhabited by sheep (Image: GETTY)

Li claimed that the books portrayed the police as wolves while “embellishing bad behavior” and “poisoning” the impressionable minds of children.

One book depicts wolves as dirty and sheep clean, while another shows sheep fighting with their horns, Li points out.

He also confirmed that the police were planning to make further arrests.

He explained, “If even metaphors are forbidden now, then no one will be able to read George Orwell’s classic political allegory Animal Farm.

“But the national security police continue to move the red lines, so there is less and less room for public expression of citizens.

“Under such circumstances, we never know exactly where the red lines will be.

“All we can do is keep doing what we think is right.”

A spokesperson for the speech-language pathology union who only gave Melody’s nickname admitted that the union was motivated by a desire to counter what she called the Chinese Communist Party’s “propaganda” currently taught in schools.

She added: “We didn’t know how long this cover-up of the truth about the anti-extradition movement would last, so we wanted to record something for this age group.

“That way they could understand what happened; children have a right to know these things.

“They are also part of society and they will be responsible for that in the future.”

A statement issued by CTU added: “Today, a children’s book is defined as seditious.

“Tomorrow all metaphors could be read as seditious words, and everyone in society is on edge.

“It also explains why many creators censor themselves, removing their works from the shelves.

“The case again shows how the law is just being used by the authorities to spread fear.”

The sheep metaphor probably dates back to the remarks of then-general manager Leung Chun-ying in 2015.

In his New Years message on the first day of the year of the goat, also translated as the year of the ram or the sheep, Leung said, “The past year has not been easy for Hong Kong.

“Our society was full of differences and conflicts.
“In the year to come, I hope all Hong Kong people take inspiration from the character of the sheep and come together in an accommodating way to work for the future of Hong Kong.”