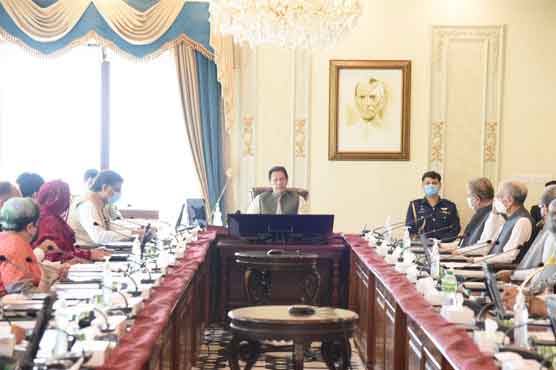 ISLAMABAD (Dunya News) – The federal cabinet strongly protested against the decision to keep Pakistan on the coronavirus red list on Tuesday and decided to raise the issue with British authorities.

Addressing a press conference after the federal cabinet meeting on Tuesday, he said the meeting, chaired by Prime Minister Imran Khan, called the reasons given by the British government unsatisfactory. The memorandum of understanding on extradition of criminals was also discussed in detail.

“We hope that the British government will reconsider its policy,” he added.

He said the current opposition is frivolous and incompetent, adding that it has no interest in electoral reforms and that the policies of the Muslim League of Pakistan-Nawaz (PML-N) and the Pakistan People’s Party ( PPP) is limited to obtaining court dates. .

He said that the party of Shaheed Benazir Bhutto and Zulfikar Ali Bhutto is in the hands of clowns, adding that Bilawal Bhutto and Maryam Nawaz can only become prime minister by rigging.

The minister said Prime Minister Imran Khan had expressed serious reservations about the process of acquiring land from the poor in Islamabad to distribute plots among bureaucrats, journalists and judges.

Chaudhry said the prime minister has formed a committee under the chairmanship of Planning Minister Asad Umar which will develop a comprehensive policy to control the exploitation of the poor.

He said the policy will formulate a system so that ordinary people’s land cannot be acquired to appease bureaucrats, journalists and judges.

Fawad Ch said the cabinet also approved a security plan for the New Zealand cricket team on their upcoming tour of Pakistan. He said extra ordinary security will be provided to visiting cricketers.

He said the application of the Basic Services Law at Radio Pakistan has also been approved. He said the government is also working to revive the film industry for which the importation of foreign films, except Indian films, will be allowed.

The minister said port charges on exports have been reduced by 50 percent. He said the voluntary retirement and golden handshake program for Pakistan Medical Council employees also got cabinet approval. It was approved to establish a joint security commission between Pakistan and Uzbekistan.

The cabinet approved funds for the payment of unpaid expenses at the Roosevelt Hotel in New York City.

He said the cabinet held a detailed discussion on electoral reforms to ensure free, fair and transparent elections in the country. He says this is the first government, which itself calls for electoral reforms, but it is unfortunate that the opposition has no interest in this.

“The main opposition parties, including the Pakistan Muslim League-Nawaz and the Pakistani People’s Party have no interest in making the electoral system transparent because they never came to power without rigging,” he said. -he declares.

Chaudhry, however, said Prime Minister Imran Khan and his government are determined to move forward with electoral reforms, including the introduction of electronic voting machines.

Will the United States lose its international credibility because of its defeat in Afghanistan?