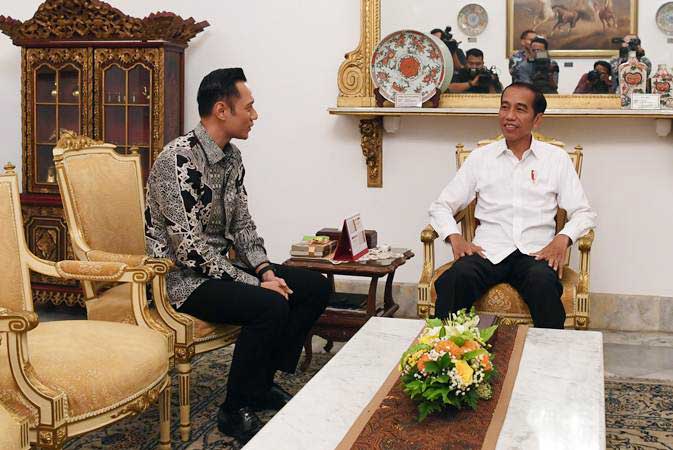 Bisnis.com, JAKARTA – Three years before the 2014 presidential election, the name of Joko Widodo (Jokowi) is not well known. At that time, Jokowi, who was head of state for two terms, still held the post of head of state. Mayor of Solo.

President Susilo Bambang Yudhoyono (SBY), on the other hand, can no longer advance in the competition 2014 presidential election. This is because the constitution resulting from the post-reform amendment only provides for a two-term presidential term.

Meanwhile, the reality of the survey in 2011 still mentions the three names that have the highest eligibility. The three names are Megawati Soekarnoputri, Prabowo Subianto and Wiranto. The name Jokowi has not yet entered the radar of the national leadership inquiry.

Jokowi’s popularity began to increase when a number of media outlets published the results of his work in organizing the city of Solo. Jokowi became increasingly popular when he decided to challenge Fauzie Bowo in the contested DKI regional elections in 2012.

Jokowi was elected governor of DKI. His leadership style was populist and seen as populist, numbing the society of the time. Suddenly, with a poll and the support of a number of volunteers, the former mayor of Solo began to enter the radar of presidential candidates.

However, Jokowi’s candidacy for the presidency did not go smoothly. There are different perspectives among the elite of the PDIP. The senior camp generally still wants Megawati Soekarnoputri to advance in the 2014 political contest. The struggle of the “botohs” within the internal bull party then gave rise to friction.

Some PDIP elites appear to be so fiercely opposed to Jokowi’s appointment plan. Currency’ojo pedot oyot‘which represents the desire of a number of elites to continue wearing the Soekarno breed, resonates quite strongly. On the other hand, Jokowi’s popularity continues to skyrocket. Bak, Valentino Rossi, Jokowi passed his opponents around the corner. The popularity of Megawati is keteter.

Public enthusiasm coupled with polls which still show Jokowi as the top candidate has apparently changed the minds of the PDIP elite. Megawati has finally relaxed. He chose to “resign” from his candidacy and appointed Jokowi as the official presidential candidate of the PDIP. Jokowi is also paired with Jusuf Kalla, a “veteran” politician of the Banyan party, Golkar.

The political protest of 2014 then presented a fairly strong polarization. The Jokowi-JK camp was against Prabowo Subianto-Hatta, who at the time was promoted by the big coalition. Almost the majority of parties support Prabowo. No exception, Golkar, which at the time was run by the conglomerate Aburizal Bakrie.

Jokowi wins. Five years later, he again showed up in the arena. The opponent is still the same, Prabowo. The two are just different partners. Jokowi and Ma’ruf Amin, while Prabowo chose Sandiaga Uno. The results are very distant. Jokowi-Ma’ruf got 55.5% of the vote and Prabowo-Sandi 44.5%.

The 2014 presidential election became landmark for the Democratic Party to encourage leading candidates who are not part of the coalition of major parties. It is hoped that one of the political elites, Agus Harimurti Yudhoyono, the youngest son of Susilo Bambang Yudhoyono, will have the same luck as Jokowi.

Even so, Democrats have not openly encouraged “Crown Prince Cikeas” to run for the presidential election challenge. They argue that the 2024 presidential election is still a long way off, they prefer to help the people during the pandemic. Admittedly, political posters and billboards for “SI4P AHY” have already spread across the country.

Therefore, the Democratic Party has chosen the momentum of the current pandemic to get closer to the people. There are different ways, the most common is to provide help. This took.

“AHY’s eligibility is high, okay. For us, we are very grateful but it becomes a whip for us too, ”said Herzaky Mahendra Putra, head of the Democratic Party’s Strategic Communication Agency.

However, an attempt to juxtapose the fate of Jokowi and AHY, if the proverbial term is like earth and sky. This does not mean that AHY cannot become president. The political journey of AHY and Jokowi is quite different.

Jokowi, despite the many blasphemies received today, is part of the born elite of society. He started his career not as a party elite. Similar to the story of Ken Arok, from being a person to being the king or the president of Singosari. Born of ordinary people and slowly managed to form the image of “The little hero Wong”. Jokowi, blusukan, and eventually became president.

While AHY, far from the impression minority. However, AHY’s presence in the political arena cannot be separated from the role of his father, who served as president for two terms, as well as the leader of the Democratic Party. AHY comes from the elite. He was born into a well-established elite family from the New Order era to the present day.

AHY’s story is actually similar to that of Gibran Rakabuming Raka, Jokowi’s son. They were both born into the elite. The difference is that Gibran started his political career as mayor. AHY started his career directly at the national level.

Golkar DPP party chairman Muhammad Sarmuji said that with regard to the presidential election, the facts show that none of the elected presidents have high eligibility apart from incumbents or candidates who have already participated. Since the reform era and the presidential election were elected directly by the people, their level of eligibility was low. Not just Jokowi, this applies to SBY when he joined the arena in 2004.

Therefore, according to Golkar, the current investigation is normal. Including if the eligibility of their general president, Airlangga Hartarto, is not great at the moment. “We, as party officials, for us, a good poll doesn’t make us careless, a weak poll doesn’t make us weak. We are political fighters, ”he said.

The presidential election of 2024 is still far away, but several polling institutes have announced the results of their research on the level of eligibility of the figures in 2024. Of all the polls, the eligibility of Prabowo Subianto is still important, if not the higher.

The latest survey was conducted by Flow Survey Indonesia which conducted a survey for the period August 26 to September 3. The survey was conducted nationally in 34 provinces using the multistage random sampling method. The number of respondents is 1,200 people with a margin of error of about 2.9% at a confidence level of 95%.

Indonesian Survey Flow Executive Director Ali Rif’an explained that if the presidential election were to take place at that time, Jokowi’s cabinet with the highest votes would be Prabowo Subianto (15.7% ), Sandiaga Uno (10.5%), Tri Rismaharini (7.1%), Tito Karnavian (6.8%) and Sri Mulyani (6.3%).

If all the potential numbers are met, then Prabowo’s highest eligibility is 17.1%.

This figure is not too different from the results of the Indonesian Survey & Polling (SPIN). The SPIN survey was conducted from August 7 to 21 with 1,670 respondents aged 17 and over from 34 provinces.

Sigi uses a random multi-step method. The confidence level is 95% and the margin of error is approximately 2.4%.

SPIN director Igor Dirgantara said Prabowo’s name was superior to personalities who had started to run in the guerrillas or to those who were due to run in the contested 2024 presidential election.

Puan’s eligibility rate is 2.3 percent or lower than Tourism and Creative Economy Minister Sandiaga Uno at 4.9 percent. While Airlangga 1 percent.

Prabowo’s continued eligibility, according to Igor, is suspected because there are publicly known events regarding his activities that are widespread and very easily accessible.

Therefore, it is not surprising that the eligibility of Party General Chairman Gerindra is in first place with a 21.9% acquisition.

The public considers Prabowo’s actions and attitudes to correspond to the issues he raised during the campaign before becoming the current Minister of Defense. The age factor which is considered public is not a barrier for a person to participate in the 2024 general election

“However, the eligibility obtained by the candidates when completing the survey is still very likely to change as 70% of the public still need additional information which serves as a reference source to determine their choice to give to the competitors. presidential candidates, “he said.

Watch the selected videos below: