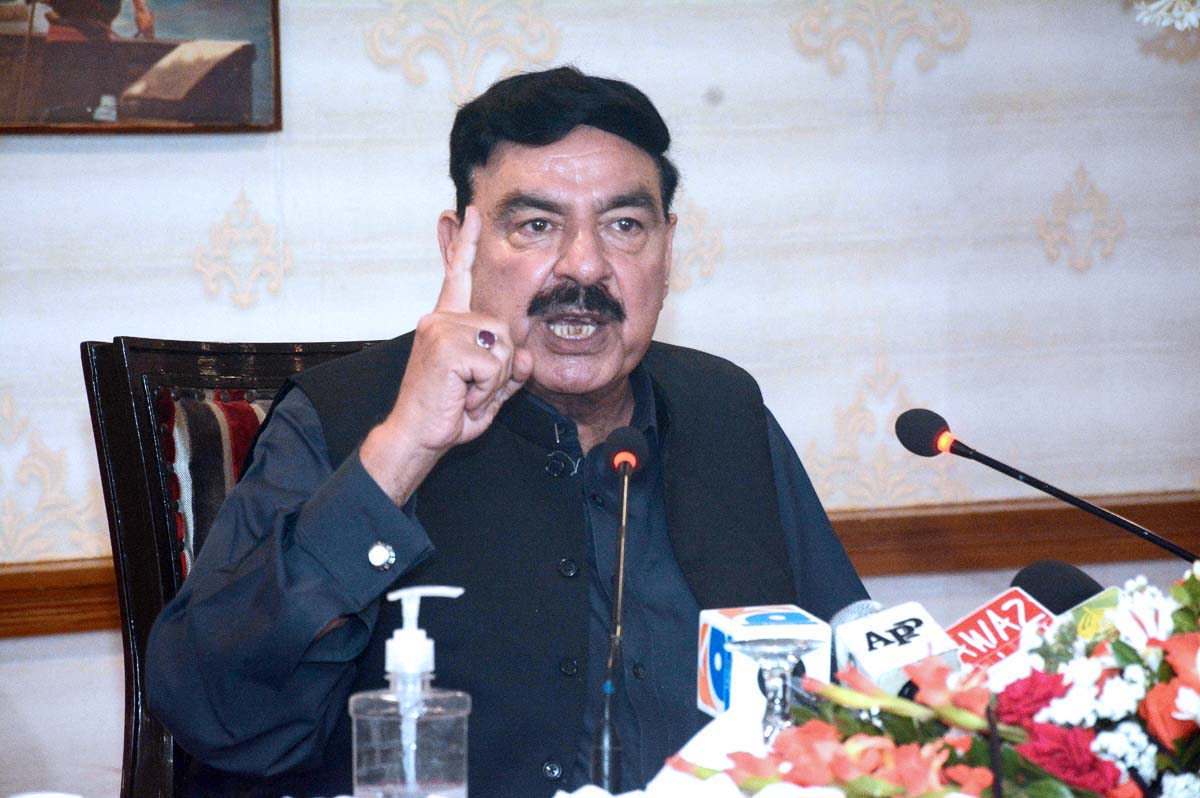 KARACHI, September 12 (APP): Home Secretary Sheikh Rasheed Ahmed on Sunday said the world wanted Afghanistan to become Scandinavia in eight days because seizing Afghan accounts was not a reasonable thought and could create a humanitarian crisis.

He said: We should hope that the Taliban would take action with the world and not allow the TTP or Daesh terrorist groups to use their land as they said.

He said this during a press conference at a local hotel here. Under the present circumstances, no wish of India is being granted and no bloodshed has taken place. He said Indian media were shouting to impose a ban on Pakistan.

He said Narendra Modis’ media carrying baseless allegations against the Pakistani military about the Panjshers fabricated stories and disseminated baseless information. It should be borne in mind that Pakistan’s interest in Afghanistan is only peace, stability and development.

India’s media is 80 to 85 percent based on lies, he said, adding that the Pakistani military had protected its board of directors to avoid terrorist activity.

He said Pakistan was of great geographic importance in the region. Pakistan would also speak to the world of peace.

The Home Secretary said: We helped Mula Biradran sit down with Americans at tables for the cause of peace.

The United States left Afghanistan by signing an agreement and Pakistan has not signed any signature on it. We did not guide them to do anything but we are only peace facilitators, he said.

He said earlier that diplomatic planes should ask Pakistan to fly within its air limits, but after Prime Minister Imran Khan’s successful foreign policy, they are now asking to land in the country. Speaking of Pakistan’s efforts on foreigners d ‘Afghanistan, he said that the Pakistani army had made it possible to move eight to ten thousand people (foreigners) with great hospitality from Pakistan to their countries of origin, or wherever they want to go.

The Home Office issued them a 21-day visa and even issued a month-long visa to foreigners who could not make it to their destination due to flight delays etc. country had been illegally removed even from Karachi.

Responding to a question about the conversation between US President Joe Bidens and Chinese President Xi Jinping, he said they had spoken for about 70 minutes and it was a big step. He said after a gap of seven to nine months, two superpowers are talking to each other.

The Home Secretary said the bitterness between the United States and China is also creating problems for impartial countries like Pakistan.

Responding to another question, he said Pakistan could appeal to the world to avoid any crisis in the aftermath of the seizure of Afghan accounts.

Responding to another question, he said that if Ashraf Ghani had accepted Prime Minister Imran Khan’s words, he should not escape like this.

Pakistan is leaving Afghanistan’s ruling on the Afghans. Pakistan is not interfering and it will not allow others to interfere.

He said 4 million Afghan refugees were already living in Pakistan and the Pakistani government would also consider their fate when the Afghan government was stable. he (Nawaz) was gone leaving a set-up.

He wanted peace in the region and was in contact with China and Russia and the prime minister will meet with them on September 17. A meeting was also possible with the Iranian president, he added. Rasheed said sectarian problems were being created in the country and that foreign elements were involved.

He said don’t think of D-Chowk Islamabad as Hide Park. He called for politics and no one would be allowed to create religious differences.

Imran Khan and his cabinet wanted to introduce electronic voting machines and if the opposition had any reservations about them, they should sit down to discuss the same solution.

He said the amending bill would be introduced. We want to introduce electronic machines to honor the elections. Responding to a question, he said the Pakistan Election Commission (ECP) reserves would also be removed from the machines.

Responding to a question, he said that PDM was coming to take our resignations on December 30 and that they had again started the same practice as announced by public gatherings. He said it looked like they weren’t against us rather they were on an election campaign as the fourth year of government began.

Responding to a question, he said it was Bilawal’s time to play. He said the cantonment council elections took place today after 15 years in Prime Minister Imran Khan’s government.

the Ramdas Athawale bats for the caste-based census; says ‘it’s up to PM Modi to decide’

307 Politics: Is the Wyoming House Race About Biden or Trump? | 307 Politics