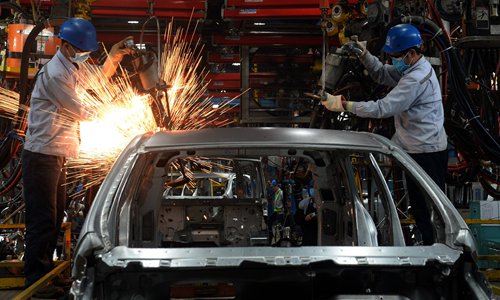 The recent move by US automaker Ford Motor to stop manufacturing vehicles in India has dealt a further blow to the South Asian country’s goal of strengthening its manufacturing industry under Prime Minister Narendra Modi and laid bare growing risks and difficulties for foreign companies in India, Chinese analysts said Sunday.

After 25 years of production in India, cumulative operating losses of over $ 2 billion over the past 10 years and non-operating asset impairment of $ 800 million in 2019, Ford has announced it will cease to manufacture vehicles for sale in India as part of a restructuring to create a sustainable profitable business in India. The decision is expected to result in the loss of 4,000 local workers.

Ford’s move is another example of the failure of the Indian government’s “Make in India” strategy despite the so-called political partnership with the United States, Chinese experts said.

Unlike what is happening in India, Ford is stepping up its pace in the Chinese market. Ford China sales in the first half of 2021 were up 24% year-on-year, and for the fifth consecutive quarter, adjusted EBIT increased year-on-year, according to the company’s latest financial report.

Ford has closed its Indian plant to cut losses, but its prospects in China are very bright, given the promising and huge potential of the Chinese car market, Cui Dongshu, secretary general of the China Passenger Car Association, told the Global Times. Sunday.

Indian demand is relatively weak, while demand in the Chinese market remains robust, especially for high-end cars and new energy vehicles (NEVs) thanks to increased consumption and the policy of supporting the economy. NEV industry, Cui said.

In July, China accounted for 53% of NEV’s global sales. The electric vehicle industry in India, however, lags far behind, with less than 1% of total vehicle sales. China also ranks first in the world in terms of the number of motor vehicles in circulation and the increase in that number, according to industry data.

Previously, General Motors had stopped making cars in India. With the Indian auto market now dominated by low-cost cars from Maruti Suzuki, it is difficult for many foreign automakers, including Ford, to gain a share, industry insiders have said.

In addition to the market potential, China’s reliable and comprehensive supply chain is another reason it outperforms India in the global automotive industry.

While India’s labor costs are low, the country is at a disadvantage in many other important areas including labor skills, production chain maturity, production facilities, support such as logistics and, more importantly, the potential consumption of the market, the experts said.

Ford’s move not only sounded the alarm on Modi’s goal of strengthening the country’s manufacturing industry, but also provides another indication of the failure of the “Make in India” as some large multinational companies are failing. More optimistic about the possibilities for growth and development in India, Qian Feng, director of the research department of the National Strategy Institute at Tsinghua University, told the Global Times on Sunday.

Qian noted that the move could signal a decrease in foreign investment in manufacturing industry in India, which, “instead of being determined by the rhetoric of politicians, is more objective about the economic and market situation and government policy “.