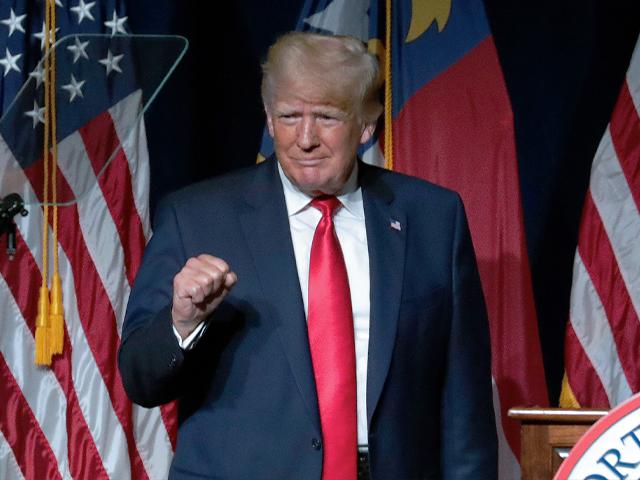 Former President Donald Trump urged Americans to pray for our nation in honor of the men and women who perished in the terrorist attacks of September 11, 2001.

Trump addressed the nation on Saturday in a recorded video that aired at Sean Feucht’s “Let Us Worship” prayer event on the National Mall.

“It is an absolutely profound honor to address all of you gathered at the National Mall on this very solemn day of remembrance and prayer as our nation commemorates the 20th anniversary of the terrorist attacks of September 11, 2001 … a terrible day “Trump said.

“I want to thank Sean Feucht and all the members of the incredible Let Us Worship movement for organizing this very beautiful and very incredible event. For the past year, you have brought worship and prayer to 132 cities across the country. country, including the largest religious service right here in our country’s capital by uniting citizens of all faiths and backgrounds to promote faith and freedom in America, ”he continued. “You make our whole nation stronger and we thank you for it. There is no more fitting night for Americans to join hands and bow their heads in prayer than tonight.”

The former president thanked the first responders who sacrificed their safety to come to the aid of those in danger.

“Two decades after nearly 3,000 Americans were murdered at the World Trade Center, the Pentagon, and a field in western Pennsylvania, we honor the memory of every innocent soul killed in the 9/11 attacks. We cherish their legacy and we reaffirm our eternal We all remember hearing, in the hours and days after the attacks, the stories of police officers, firefighters and first responders who displayed bravery and daring well beyond the call of duty, ”Trump said.

“As a longtime New Yorker, it was amazing to see the strength and resilience of the people in this amazing city and it is indeed an amazing city. They ran into danger and smoke without thinking. to their own safety The heroism of the NYPD, FDNY, firefighters, police, Port Authority police as well as Pentagon first responders and so many others will live on in our national memory forever.

“Tonight I want to express our thanks to all of the first responders on the National Mall. You are the best in our country. You are amazing people. I also want to ask every American here today and across the country to take a moment to share our gratitude for the countless individuals, active duty military, veterans and military families who have sacrificed themselves to defend our country over the past two decades and especially thank and remember the brave heroes who served in Afghanistan, ”he continued.“ They courageously volunteered to hunt down the vile killers who attacked America and to eradicate the threat of radical Islamic terrorism from the face of the earth. And I know what you are thinking because we had a very, very great embarrassment last week. Something terrible has happened. Terrible decisions have been made by this administration but you are brave, you are incredible and it will be made up. “

Trump highlighted the efforts of the Feucht ministry and the steps taken to honor the victims.

“Earlier today, members of the Let Us Worship movement placed flags on the graves of all of the servicemen in Arlington Cemetery who have given their lives for our nation since September 11. To the Gold Star families on the site. mall and to the family members of all servicemen who made the supreme sacrifice in our fight against the terrorist enemy, please know that you have our undying loyalty and undying devotion, and the love and support of every American .

Father Mychal Judge, martyr of #TwinTowers, pray for us pic.twitter.com/nmpsAO7jcp

“As we pray and reflect on this anniversary, a story from that terrible day points the way for our nation and reminds us of the endless source of our hope as black smoke billowed across the Potomac in the Pentagon and the New York sky were full of ash and flames, a lone figure stood in the window near the base of the North Tower of the World Trade Center. Father Mychal Judge was the chaplain of a barracks in New York fire department. When the first plane hit the World Trade Center. Center, he ran inside knowing the danger, “Trump said.

“Video testimony shows him standing at the large window watching people die. A friend and colleague later recounted that if you watch closely, you can see the lips of the Father moving. For those of us who know him, the friend said that he is not someone who talks to himself … he is praying. Moments later, the south tower collapsed and the implosion shattered the glass and killed Father Mychal. “

Trump continued, “The day before his death, Father Mychal spoke at a dedication at a fire station in New York City. In front of a group of firefighters, he shared a message that resonates through all time. . ‘You are doing what God called you to do, “he told them. “You show up, you put one foot in front of the other. You get on the platform and you come out and you do the work which is a mystery. You have no idea what God is calling you. have no idea where you’re going and in some cases you don’t know why, but He needs you. He needs me, He needs all of us. ‘”

“Tonight Father Mychal’s words remind us that in the end there is only one true answer to the depth and evil we saw on September 11. Forged the mighty cross of steel from the broken beams of fallen towers. This is the same sight that was seen hundreds of miles away in Shanksville where the first spontaneous memorial to the heroes of Flight 93 was a simple but beautiful wooden cross. is the same … turning to God, the ultimate answer to the evil we see here today as thousands of Americans gather on the Mall to pray for our beloved nation and to pray for one for them. others.”

Concluding his speech, Trump praised Let Us Worship for calling on Americans to pray for one another despite our differences as we go through these difficult times together.

“I want to thank Let Us Worship for calling Americans to 21 days of prayer in the coming weeks. America is a nation strengthened and sustained by God and the prayers of all of her children. Your faith is a strength that our enemies will never, ever be able to extinguish, ”he said. “Your love for God, your family and your country is more powerful than the hatred, wickedness or contempt of any adversary. So as we remember those Americans we lost two decades ago, we let’s go back and forth to the same simple prayer that was heard echoing across our country in the days following the 9/11 attacks. God bless our first responders. God bless our military. God bless the memory of all who died on September 11 and God bless America. “

*** Please sign up for CBN newsletters and download the CBN News app to ensure you continue to receive the latest news from a distinctly Christian perspective. ***