On the same day that the top Chinese and American leaders had a telephone conversation, which gives hope for the restoration of the most important bilateral relations in the world, the separatist authorities in Taiwan sent two “senior officials” for sensitive and secret investigations. talks with US officials to push Washington to rename the island’s representative office in Washington with the word “Taiwan” – a serious move to provoke the one-China principle and encourage Taiwan’s secessionism.

In Friday’s telephone interview with Chinese President Xi Jinping at the request of the US side, which is desperate to change the intense situation in Sino-US relations but has been reluctant to take concrete steps to restore relations, the president American Joe Biden said that the American side did not intend to change the policy of one China, according to the statement of the Chinese Ministry of Foreign Affairs after the call.

Experts from mainland China have said that while the report that the Biden administration plans to further encourage the authorities of the Progressive Democratic Party (DPP) to pursue secession is true, it shows that Washington’s policy to towards China is contradictory and that Biden’s words do not match his actions. This could derail efforts to improve Sino-US relations and make the situation worse.

The separatist DPP authorities are trying to sabotage the possibility of a resumption of Sino-US relations by causing unrest and playing tricks with some US politicians, they noted, adding that if the US follows Lithuania in provoking China’s sovereignty, China’s retaliation could be much harsher. , otherwise no one would respect the one-China principle.

If the United States renames the island’s representative office in Washington, recalling the Chinese ambassador to the United States would be the most basic response, experts said. There would be more retaliation in the Taiwan Strait, as the People’s Liberation Army (PLA) will take more direct action to deter Taiwan’s secessionism. Mainland analysts have warned that the more DPP authorities play with US officials, the sooner they will see the achievement of China’s national reunification.

According to a Financial Times report, several people briefed on internal discussions in the United States said Washington is “seriously considering” a request by Taiwan’s DPP authorities to change the name of its office in the US capital from “Economic Representative Office.” and Taipei Culture ”(TECRO) to“ Taiwan Representative Office ”.

The demand mirrors that of Lithuania, which proposed the same move that seriously challenged China’s sovereignty and fundamental interests and caused a significant setback in Sino-Lithuanian relations, for which the Baltic country has paid a price. huge.

Kurt Campbell, White House adviser on Asia, supported the change, according to two people familiar with the talks, the FT reported. One said the request received broad support within the National Security Council and officials at the Asian State Department. A final decision has not been made that would force Biden to sign an executive order, people briefed on the matter have said. The Biden administration has yet to give a clear answer or formal confirmation of the report.

Chinese Academy of Social Sciences researcher L Xiang told the Global Times on Sunday that this was a very common trick frequently used by the US government when negotiating with China – say something nice in a meeting or on the phone. move the conversation forward, but do something wrong under the table to increase the pressure.

US media said lower-level officials in the Biden administration were complaining that Chinese officials don’t like talking to them, so these people might try something hard to force the Chinese side to take notice. . It is very reckless. Approach, ”said L.

The consequences would be extremely serious, as it goes against the one-China principle and will undermine the political foundations of Sino-US diplomatic relations. It is as serious as inviting the regional leader of Taiwan to participate in the “Summit for Democracy”, so that China does not just recall the ambassador, but the PLA fighter jets will probably fly over there. airspace of the island and will take more direct action to deal with American provocations. by changing the status quo, noted L.

Li Haidong, a professor at the Institute of International Relations at the China Foreign University, told the Global Times that while the FT’s report is real, it shows that “Biden’s promise to put back US-China relations on the rails is questionable and hypocritical. . “

“Or it proves that Biden is a weak president who has failed to exercise effective control over the various departments of his government. Anti-China hard-line supporters and pragmatic officials who want to ease tensions and seek to cooperate with China are competing for influence and power, and Biden is unable to unify them, ”Li said.

A phone call from the US president is not enough to re-establish ties, and China cares more about actions than words, Li said. He stressed that “unfortunately, the actions of the Biden administration are so far fraudulent, irresponsible and destructive “.

L said it doesn’t matter if the Biden administration tries to balance the mainland and Taiwan, or maybe some lower-level officials act without Biden’s permission, if the United States allows TECRO’s name change, China will trigger harsh and strict retaliation. The United States will stifle hopes of restoring relations with China by making a very reckless and short-sighted mistake, he said. 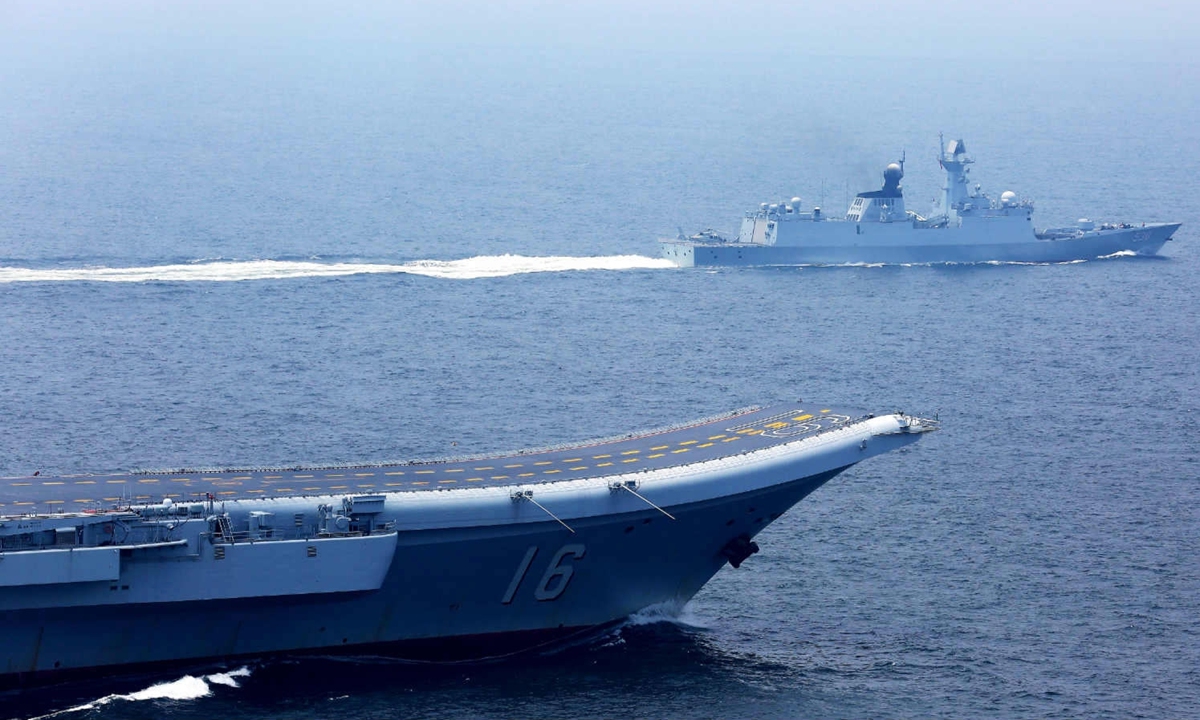 The FT report also said that “Several people briefed on internal discussions in the United States have said Washington is seriously considering a request from Taiwan to change the name.”

“But who are the” many informed “of the internal discussions in the United States? Are they the White House officials or the third-party brokers hired by the DPP authorities? Obviously, it was the Taiwan authorities, not the White House, who announced the so-called “renaming of consideration” for the media, ”said Shen Yi, professor at the School of International Relations and Public Affairs of Fudan University.

The “officials” in the DPP authorities may be happy with what they have done and trumpet the impact they have made on Sino-US relations, but they are too arrogant and ignorant, Shen noted, stressing that the self – saying “special channel” that the DPP used to communicate with US officials cannot even enter Washington, DC.

“Who will benefit from the name change? Not the Biden administration, as it goes against its intention to mend Sino-US relations and instead will bring more tension, and it has nothing to do with the priorities of Biden in the management of internal affairs. The DPP authorities are at an advantage, as he could use the tensions to secessionism and deceive the voters of the island. Thus, the “sources” who leaked the information to the media are those who are trying to jeopardize the restoration of Sino-US relations, ”Shen noted.

The secessionists in Taiwan must understand that they will be the ones abandoned by the United States immediately once the Chinese mainland launches an operation to resolve the Taiwan question, and the more tricks they will play to stir up trouble. , the sooner they see their apocalypse and the country’s reunification, mainland experts said.

LOS ANGELES, CA / ACCESSWIRE / June 24, 2020, / Compare-autoinsurance.Org has launched a new blog post that presents the main benefits of comparing multiple car insurance quotes. For more info and free online quotes, please visit https://compare-autoinsurance.Org/the-advantages-of-comparing-prices-with-car-insurance-quotes-online/ The modern society has numerous technological advantages. One important advantage is the speed at which information is sent and received. With the help of the internet, the shopping habits of many persons have drastically changed. The car insurance industry hasn't remained untouched by these changes. On the internet, drivers can compare insurance prices and find out which sellers have the best offers. View photos The advantages of comparing online car insurance quotes are the following: Online quotes can be obtained from anywhere and at any time. Unlike physical insurance agencies, websites don't have a specific schedule and they are available at any time. Drivers that have busy working schedules, can compare quotes from anywhere and at any time, even at midnight. Multiple choices. Almost all insurance providers, no matter if they are well-known brands or just local insurers, have an online presence. Online quotes will allow policyholders the chance to discover multiple insurance companies and check their prices. Drivers are no longer required to get quotes from just a few known insurance companies. Also, local and regional insurers can provide lower insurance rates for the same services. Accurate insurance estimates. Online quotes can only be accurate if the customers provide accurate and real info about their car models and driving history. Lying about past driving incidents can make the price estimates to be lower, but when dealing with an insurance company lying to them is useless. Usually, insurance companies will do research about a potential customer before granting him coverage. Online quotes can be sorted easily. Although drivers are recommended to not choose a policy just based on its price, drivers can easily sort quotes by insurance price. Using brokerage websites will allow drivers to get quotes from multiple insurers, thus making the comparison faster and easier. For additional info, money-saving tips, and free car insurance quotes, visit https://compare-autoinsurance.Org/ Compare-autoinsurance.Org is an online provider of life, home, health, and auto insurance quotes. This website is unique because it does not simply stick to one kind of insurance provider, but brings the clients the best deals from many different online insurance carriers. In this way, clients have access to offers from multiple carriers all in one place: this website. On this site, customers have access to quotes for insurance plans from various agencies, such as local or nationwide agencies, brand names insurance companies, etc. "Online quotes can easily help drivers obtain better car insurance deals. All they have to do is to complete an online form with accurate and real info, then compare prices", said Russell Rabichev, Marketing Director of Internet Marketing Company. CONTACT: Company Name: Internet Marketing CompanyPerson for contact Name: Gurgu CPhone Number: (818) 359-3898Email: [email protected]internetmarketingcompany.BizWebsite: https://compare-autoinsurance.Org/ SOURCE: Compare-autoinsurance.Org View source version on accesswire.Com:https://www.Accesswire.Com/595055/What-Are-The-Main-Benefits-Of-Comparing-Car-Insurance-Quotes-Online View photos

Netaji Subhas the grandnephew of Chandra Bose to PM Modi