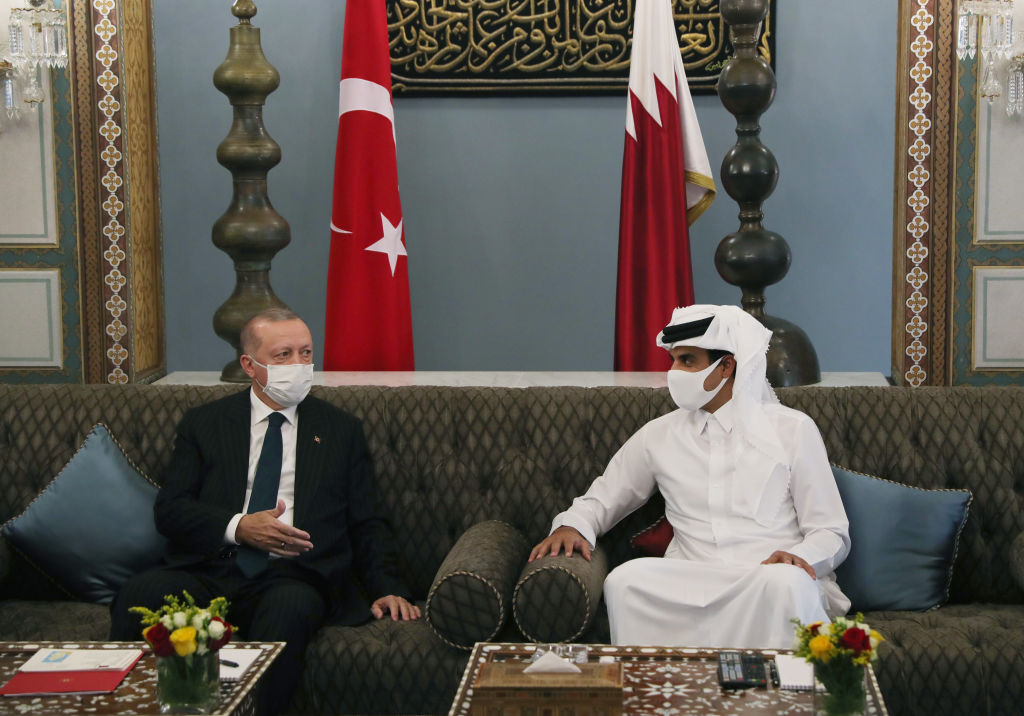 The Afghan fiasco has already sparked regional rivalries. The small but oil-rich state of Qatar and the allied Republic of Turkey were the first to step aside, joining forces to help the Taliban and their Pakistani backers consolidate their power and gain international recognition. What’s in it for these two distant actors?

Much of the comradeship between Qatar and Turkey has crystallized since the pro-democracy popular uprisings, or Arab Spring, more than a decade ago. The two states increasingly share common regional geopolitical and strategic interests. Both Doha and Ankara supported the Arab Spring uprisings and the Muslim Brotherhood’s first electoral victory in Egypt and its resurgence elsewhere in the Arab world, particularly in the Gulf Kingdoms, led by Saudi Arabia.

Saudi Arabia and two of its Gulf Cooperation Council partners, the United Arab Emirates and Bahrain, as well as Egypt, have accused Qatar of aiding terrorism and of failing to align with the Islamic Republic of ‘Iran as a major regional threat. They kicked Qatar out of the GCC and imposed a blockade to bring it to its knees, which increased Doha’s fear of the old Saudi claim to Qatar.

Turkish President Recep Tayyip Erdogan, whose desire to be a central player in the Middle East and the Muslim world has aroused suspicion from Saudi Arabia and its allies, has supported Qatar to overcome hardship and fear arising from the blockade. He reinforced the Turkish military base in Qatar and provided it with all the assistance it needed, in particular by facilitating its transactions with Europe and beyond. Although pleased with the weakening of the GCC, Iran has also shipped fresh vegetables and fruit to Qatar to meet its immediate needs.

As such, Ankara, and to some extent Tehran, aided Doha at a critical juncture, allowing it to overcome the blockade and finally incite its instigators, as well as pressure from the new administration of US President Joe Bidens, lift the blockade in early 2021. Even so, the UAE still has not fully restored diplomatic relations with Qatar, lending credibility to another commonly held view that Dubai has avoided the rise of Doha as a competing regional financial and economic hub.

Qatar is quite small, with an indigenous population of just over 200,000, aided by two million foreign workers. But Doha has made good use of its oil wealth and close lucrative and strategic ties with Turkey as well as the United States, which has its largest Middle Eastern base in Qatar, to play an important role regionally and internationally. in the pursuit of an independent foreign policy. As part of this, he not only created the Al Jazeera media network which exposes a wide range of critical perspectives, some of which have angered conservative Arab states, but has also hosted a Taliban political office since 2013.

Doha’s mediation between the United States, the Taliban and other Afghan parties and its purchasing power has been instrumental in pushing the Taliban to conclude the February 2020 peace agreement with the United States. The agreement was woefully flawed because it did not provide for a universal ceasefire and political settlement. But he responded to the United States’ sincere desire for a full withdrawal of all foreign forces from Afghanistan within 14 months, which Biden extended by four more.

With the return of the Taliban and the humiliation of the United States and, for that matter, of the supposedly most powerful military alliance in the world, NATO, Qatar now seems to be weighing on the Taliban to make their governance operational and credible. , although under the patronage of Pakistan’s powerful military spy agency, Inter-Services Intelligence.

After transporting the Taliban’s deputy chief and senior negotiator from Doha to Kandahar in late August, Qatar has now sent a technical team to help manage Kabul airport operations for domestic and international flights. He also indicated his willingness to make a substantial financial contribution to the Taliban coffers and to activate the dying Afghan economy. Today, the second largest and most active embassy in Kabul, after Pakistan’s, is Qatar. In its efforts, Qatar is joined by Turkey in helping to activate the Kabul airport and express its willingness to play a role in legitimizing the Taliban regime.

The Qatari and Turkish approach is unlikely to be well received by GCC members, especially the UAE and Saudi Arabia. The UAE has granted asylum to Afghan President Ashraf Ghani, who fled Kabul in disgrace on the eve of the Taliban takeover of the city. Interestingly, Ghani had the option of going to Doha, but Abu Dhabi rolled out the red carpet for him, which can be seen as part of the rivalry between the two sides. Riyadh is said to be wary of the developments not only because of its lingering concerns about the behavior of Doha and Ankara, but also because of how they might ignore Saudi Arabia’s traditional close ties with Pakistan, which have recently emerged. been put to the test.

Afghanistan has historically sparked external power contests and slapped interventionists. Its potential in this regard remains alive and well in the current transition to the Taliban. Whoever regional and global actors are involved in Afghanistan, they must be aware of this reality.

Justin Bieber and Hailey Baldwin shared their styles at VMA 2021