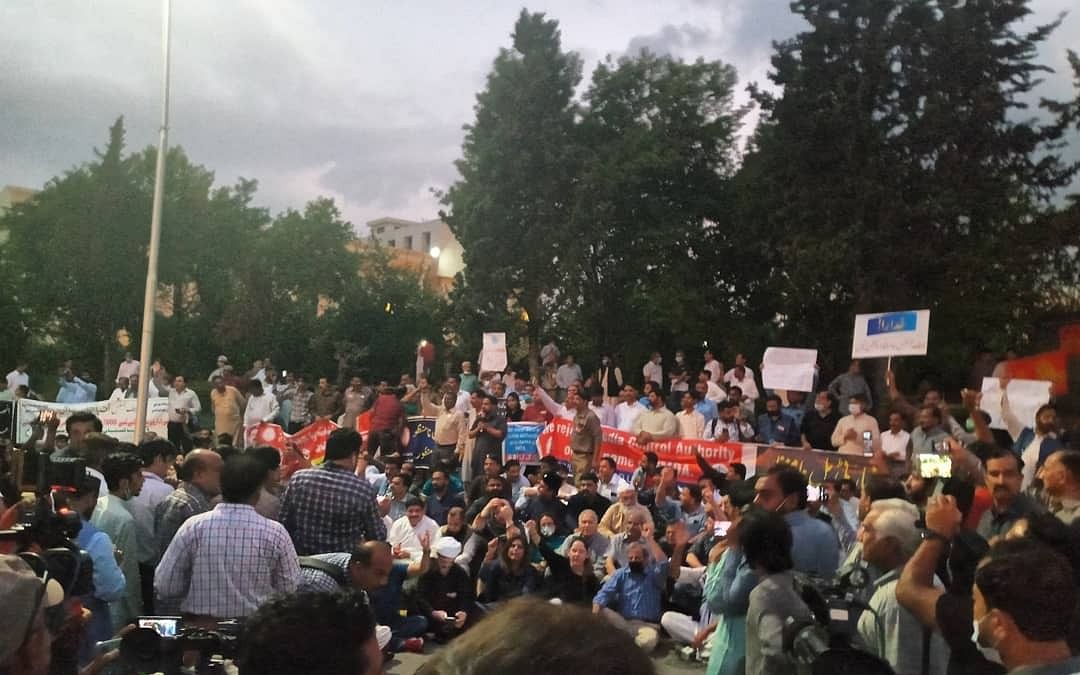 Pakistani journalists are outside the country’s parliament not to cover it but to protest a black law that proposes to muzzle the voice of the free press. Leading media outlets have called the new legislation draconian and unconstitutional.

On Sunday, journalists representing several media associations in the country marched from the National Press Club to Parliament, one day before the joint session of Parliament, which will include a speech by the President.

The secretary general of the Federal Union of Journalists of Pakistan (PFUJ), the main body behind the protests, Nasir Zaidi was quoted by Dawn as having said during the protest that the PMDA was supposed to stifle the voices of the media.

A hybrid regime that wants to pass the PMDA claims to have a “moderating” influence on the Taliban to wean them from oppression? Wow.

Also Read: Pakistanis Divided This Week Not On Cricket Or Taliban But Over Slap

According to the government’s proposal, PMDA is supposed to replace the “fractured” regulatory environment and “fragmented” regulation of media by multiple agencies.

A Dawn newspaper article noted that PMDA would be “empowered to register digital media platforms, monitor and analyze them, and enforce cyber-laws.”

Regulations will be framed under the PMDA on content published and shared by digital media. The proposed regulator will have the power to impose sanctions on media entities for violations of these rules.

The PMDA will also have the power to “issue certificates of non-objection (NOC) for the production and exploitation of films, to issue licenses for and monitor audiovisual media, and to register print media entities” , notes Dawn’s article.

The legislation also angered Pakistani journalists in London, where a protest took place outside the Pakistan High Commission.

Several prominent journalists and politicians across the country have also taken to Twitter to voice their criticisms.

Shehbaz Sharif, leader of the opposition in the National Assembly, said the sole purpose of the PMDA is to deprive the media of their independence and stifle freedom of expression. “The PTI government is demolishing all the institutions that represent democracy. We support journalists in their fight against PMDA, ”he tweeted.

The sole purpose of the unilateral imposition of the PMDA is to deprive the media of their independence and to stifle freedom of expression. The PTI government is demolishing all the institutions that represent democracy. We support journalists in their fight against PMDA.

Marriyum Aurangzeb, Member of the National Assembly and spokesperson for the Muslim League of Pakistan (N), wrote on Twitter: PMDA) #PMDA_Rejected law.

Kamran Khan, editor-in-chief of Dunya Media Group, said journalists and editors across the country can “smell a rat” in the government’s decision and that Prime Minister Imran Khan should withdraw the proposal.

“The general impression is that this move is designed to strengthen the government’s powers to censor and restrict the media,” Khan’s tweet read.

Prime Minister Imran Khan must order the rapid withdrawal of the PMDA, editors across the country feel a failure in this movement. The general impression is that this move is designed to strengthen the government’s powers to censor and restrict the media.

Then there was journalist Gharidah Farooqi who tweeted a photo of herself with several female journalists ahead of Sunday’s protest march. Journalists are united across Pakistan in protest against the PMDA plan, Farooqi wrote.

At the #PressFreedom rally. Before leaving on the march from Press Club Isb to Parliament (yesterday). With Isb’s women journalists. Journalists are united across Pakistan in protest against the PMDA project. The sit-in continues during today’s joint session. Pakistan Zindabad! pic.twitter.com/6xGnQKgNR1

US steps up efforts to unite families separated under Trump

The people arrested for distributing posters while welcoming Jokowi …