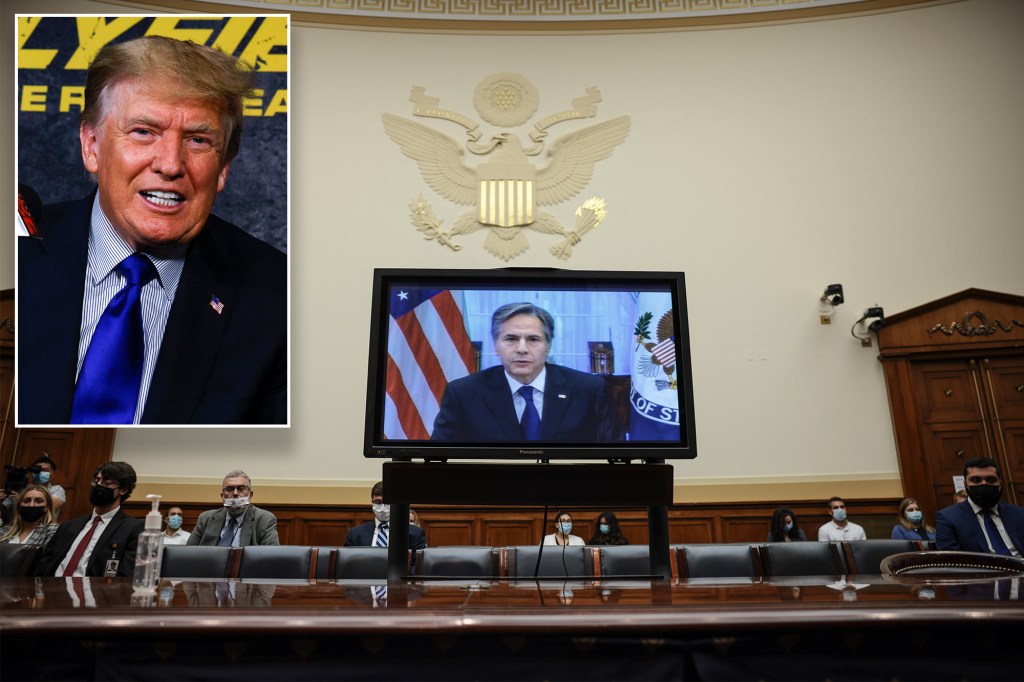 “The so-called leaders of our country have gone mad! Trump said.

In testimony before the House of Representatives Committee on Foreign Affairs, Blinken claimed he had “inherited an agreement” reached by the Trump administration “to withdraw all remaining American troops by the 1st. May of this year “.

“As part of this deal,” Blinken said, “the previous administration pressured the Afghan government to release 5,000 Taliban prisoners, including some senior war commanders. During that time, it reduced our own force presence to 2,500 troops. In return, the Taliban agreed to stop attacking American and partner forces and to refrain from threatening major Afghan cities.

In an emailed statement through his PAC Save America, Trump directly attributed the prisoner’s release to exile Afghan President Ashraf Ghani.

“The inept Afghan government, led by corrupt President Ghani, has freed 5,000 prisoners, not the Trump administration,” the former president said. “Secretary of State Blinken is doing everything in his power to make the most inept withdrawal in history seem, at least, acceptable. It never will be.

Trump went on to suggest in his statement that the Biden administration will soon pay “billions of dollars” in aid to the new Afghan government to “help it along the way.”

In an earlier statement on Monday, Trump called the withdrawal from Afghanistan “pathetic and incompetent” and warned that “it will take a long time before we regain our reputation.”

“Our country is much more likely than ever to be attacked by outside terrorist groups,” he said. “Our enemies all over the world are inspired by what just happened in Afghanistan, the withdrawal of the army first, and our ‘gift’ of $ 85 billion in military equipment … nine months the United States was seen as strong, and now we are seen as weak and foolish.

Blinken insisted in Monday’s hearing that the Biden administration had “inherited a deadline,” but “did not inherit a plan,” despite the president moving the May to September 11 withdrawal date – the 20th anniversary of the terrorist attacks. that led to the war in Afghanistan – then pushed the deadline back to the end of August.

Democrats on the committee broadly supported Blinken’s attempt to blame Biden’s predecessor, although Chairman Gregory Meeks (D-NY) admitted flaws in the execution of the pullout.

“Could things have been done differently? Meeks asked, before answering his own question: “Absolutely.”

Other Democrats in Congress, notably the senses Bob Menendez of New Jersey and Richard Blumenthal of Connecticut, lambasted the White House – Blumenthal said last week he was “deeply frustrated, if not furious, at the delay and the inaction of our governments “on the issue of getting the Americans out of Afghanistan.

“There will be plenty of time to hold account for the inexcusable bureaucratic red tape that has blocked so many of our Afghan allies,” Blumenthal tweeted, later adding that he expected the White House and the Department of State “do everything in their power absolutely everything” to get them out safely.

“It was American citizens and Afghans who risked everything for our country,” he said. “We cannot leave them behind.”

After its IPO, BlackSky will boldly venture into new markets

Stop your iPhone now and update to iOS 14.8