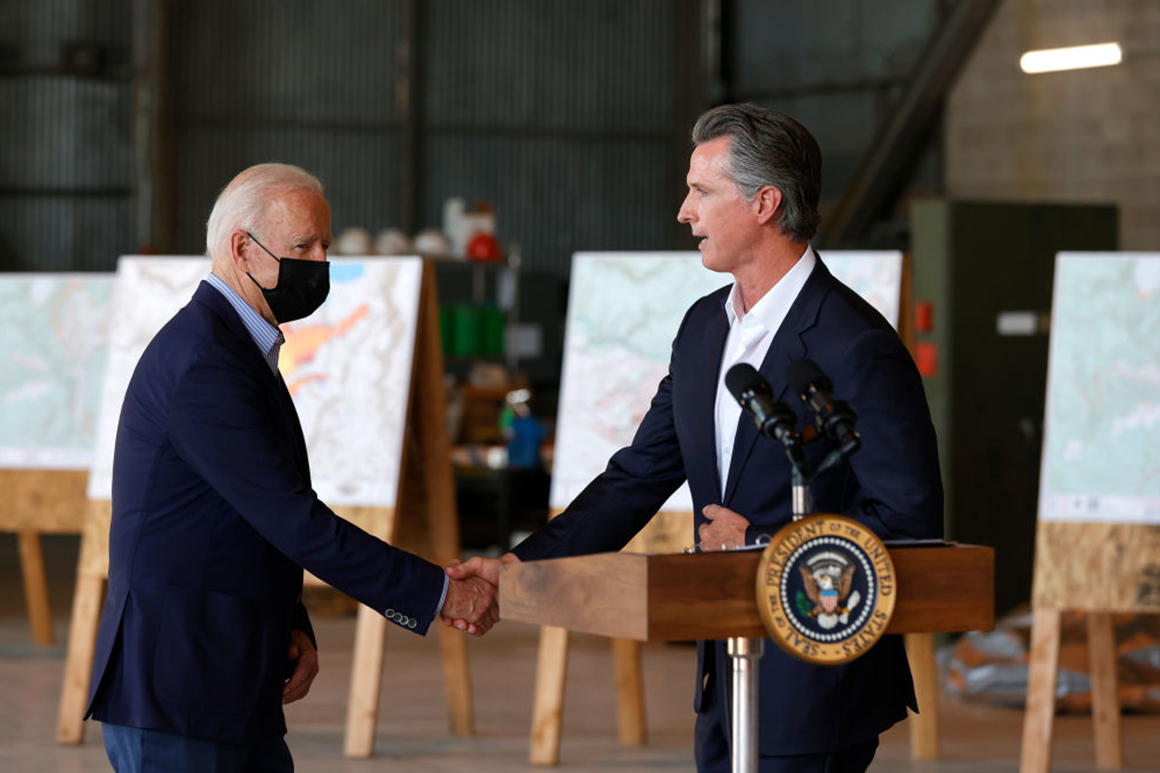 Speaking the day before the vote ended, Biden described the encore race as an extension of the 2020 presidential election. He has repeatedly said that a Newsom victory would “send a message” to the nation and introduce the Republican leader Larry Elder as the closest thing to a Trump clone I’ve seen in your state, “warning Elder would undermine women’s rights, erode labor protections and blunt Californias fighting climate change.

The nation’s eyes are on California because the decision you are about to make will not only have a huge impact on California, it will reverberate across the country, Biden said.

With 24 hours left to vote, the event looked like a quick victory speech to a few hundred people who filled a lawn at Long Beach City College and chanted “Vote No! overnight. Recent polls have shown Newsom is extending its lead to double-digit percentage points, and Democrats feel extremely confident after fearing the race was a stalemate several weeks ago. Participants greeted Biden with chants of “Joe! Joe! Joe!”

There is no scenario where we lose, Newsom strategist Sean Clegg told reporters ahead of the event.

The recall allowed Biden to partner with a Democratic victory after seeing his own approval ratings drop sharply when the Taliban quickly took control of Afghanistan and 13 US troops were killed in an attack on the country. ‘Islamic State. As Newsom has done in recent months, Biden has turned his attention to his divisive predecessor, uplifting Democrats in a Blue State where Trump is deeply unpopular.

“Either you keep Gavin Newsom as governor or you will have Donald Trump,” Biden added, saying repudiating the recall would ensure “Trump’s dark, destructive and confrontational politics never finds its place in California.”

Newsom in recent weeks has posed the recall as a choice between California’s strict coronavirus mandates, which run parallel to Bidens orders requiring vaccinations for public employees, and a rollback of Covid-19 rules similar to what the Red States did. Biden doubled down on that contrast, comparing Newsom to Republicans who have sought to block or undermine the lifesaving mandates we have proposed.

Voting ‘no’ will protect California from Trump Republicans who are trying to stop us from beating this pandemic, ”Biden said. “We don’t need politics in this battle against Covid,” he added. “We need science. We need courage. We need leadership. We need Gavin Newsom. “

Bidens ‘narrower campaign role crowned Newsoms’ efforts to nationalize the race. The governor has long touted the election as a contest between California’s progressive vision and resurgent Trumpism, predicting that a loss would undermine Bidens’ agenda and hurt Democrats in the 2022 midterm election.

We may have defeated Donald Trump, but we did not defeat Trumpism. Trumpism is still on the ballot in California, Newsom said in a line-up that drew loud applause.

Were going to send a message. Would defeat that recall, State Comptroller Betty Yee said.

Republicans lambasted Biden for taking time out of his presidential duties to support Newsom, arguing he was neglecting more important tasks although Biden used his trip west to study the damage and response to wildfires in Idaho and northern California still on fire.

Joe Biden abandoned the crisis in Afghanistan and the Americans stranded there, imposed his most authoritative COVID-19 mandate to date and stepped away from the wreckage, and ignored the ongoing crisis at our southern border RNC spokeswoman Hallie Balch said in a statement. . His appropriate Biden would rather campaign for Governor Newsom than resolve his multiple crises.

As Newsom’s campaign was hampered by concerns about a turnout gap as Republican enthusiasm overshadows Democratic interest, data from the roughly eight million mail-in ballots already returned shows Democrats voted more large number as their share of the electorate. And Newsom is feeling good, as a Berkeley Institute of Governmental Studies poll last week showed Democrats and Independents to be much more engaged than they were a month ago.

This article tagged under:

Chance the Rapper wears Ralph Lauren at the 2021 Met Gala