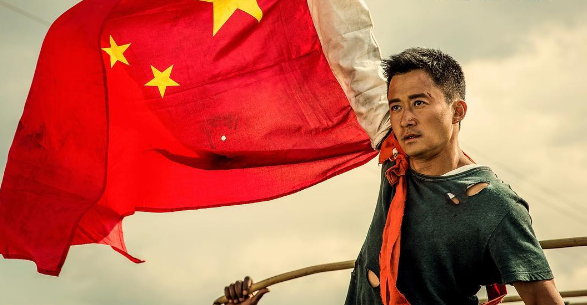 TAIPEI (Taiwan News) – The tongues of Chinese wolf warrior diplomats have been the proverbial tip of China’s sharp power spear in recent times, but as China seeks to ease tensions and open up about cooperation with the United States., the rift they have created between the two may turn out to be too wide to close.

If Xi Jinping () seriously wants Chinese diplomats to become more “thoughtful” or even “kind”, he will have to take more drastic measures to tame the wolves he has raised. Recent crackdowns on the private sector and other parts of Chinese society show it has the capacity to do just that.

Oddly enough, wolf warriors as a metaphor can be explained by something called “reification” – the mind’s natural tendency to connect closely aligned lines and dots into a single whole.

Draw 18 or more dots to mimic a circle – unless you connect them to each other – and the mind will not see the dots separately; he will see a circular pattern. One of the first schools of psychology to expose this subject was Gestalt in Germany.

Wolf warriors are, in more than one way, proverbial points in human form. Spokesmen for the Chinese Foreign Ministry and Qin Gang (), who have just arrived to fill the vacuum in Washington, DC, left by former Ambassador Cui Tiankai (), show similar aggressive temperaments.

Professional diplomats or political appointments are meant to be humble, thoughtful and polite, asserted Ernest Satow, the classic author who fleshed out the elements of modern engagement in “Guide to diplomatic practice. Yet when operating as a group, abrasive Chinese diplomats can reinforce each other and together flout standards of diplomatic conduct.

But when did the phenomenon of Wolf Warrior diplomacy really begin?

While many researchers attribute it to the successful Chinese film of the same name, one can also attest to the precise incident when it was triggered by Foreign Minister Wang Yi () himself.

When in 2016, Wang was asked about human rights in China at a press conference alongside Canada’s Foreign Minister, his infamous spread was laid back but sadly caustic.

A short sample of his responses underscores the point:

“Your question to China seems filled with contempt.”

“How you acquired this attitude is beyond me. But I can smell the mischief. “

“Do you know that China saved 600 million people from absolute poverty? “

“Did you know that we are working to save an additional 800 million Chinese from the fate of total deprivation? “

“Have you been to China?”

The quick questions left the reporter feeling bruised and intimidated, but over the past five years Chinese Foreign Ministry spokespersons have all adopted this abrasive style.

Among the main ones are Hua Chun-ying (), Zhao Lijian () and Geng Shuang (). They all take turns using the above method, including on social media platforms like Twitter or Weibo, to emphasize their points.

Therefore, this turning point in Chinese foreign policy is not so much the work of one man as the collective effort of a group of wolf warriors.

When China concluded the first round of the Comprehensive Agreement on Investment (CAI) with EU heads of state last December, the two sides walked away from the meeting with great delight.

A month earlier, after eight years of intense negotiations, Premier Li Keqiang () immediately hailed the breakthrough on the CAI.

Xi went to great lengths in praising the Comprehensive and Progressive Agreement on Trans-Pacific Partnership (CPTPP), which China has suggested joining.

In the two contexts provided by Xi and Li, the wave of wolf warriors was just a cathartic phase that China had to go through.

In addition, we must not forget that the final ratification process of the CAI is subject to the votes of more than 550 MEPs, and even before the agreement is frozen following Beijing’s sanctions against five MEPs, signs showed it would collapse on suspicion that China could not meet basic labor rights requirements.

When one party assumes that China must first adopt the International Covenant on Civil and Political Rights, the proverbial mountain seems out of reach. Structural adjustments aside, the aggressive diplomatic language used by Chinese diplomats towards their European counterparts has exacerbated the differences between them and eroded trust.

Xi knows anti-Chinese sentiments are on the rise, as captured by the non-partisan Pew Research Center in the United States. Invariably, out of 14 industrialized countries, nine showed a dramatic jump of nearly 25% to 30% in their anti-Chinese Communist Party sentiment in 2020 alone, a statistical jump that had not been observed since the center of China. research began to follow opinions 15 years ago.

Things got worse for China this year. Majorities in 15 of 17 advanced economies surveyed by Pew in 2021 now have an unfavorable view of China, including records in Canada, Germany, South Korea and the United States

This is why, according to Bill Bishop of Sinocism, XI called for diplomats to be more “thoughtful” or even “adorable”.

But the proverbial “wolves” have already emerged from the “cave” – Qin and Geng were promoted to managerial positions without any complaints from Xi. The problem for Beijing is that the crass howls of wolf warrior diplomats reverberated around the world.

With 17 of its 31 provinces facing an outbreak of the Delta variant of COVID-19 last month, one would hope that China – whether as an ancient civilization or as a growing economic juggernaut – will not return to the anachronistic practice of expecting everyone to bow down to his power.

Just as not everyone is out of the woods with the Delta variant, Chinese diplomats have yet to find their way back to honorable conduct.

A little humility would go a long way in repairing the damage done on a global scale.

Phar Kim Beng, Ph.D., is previously an Advisor to the ASEAN General Secretariat in Jakarta and is currently Founder and CEO of the Malaysian think tank Strategic Pan Indo-Pacific Arena (Strategicpipa.com). He is a former Cambridge Commonwealth Trust Fellow and has won numerous Harvard University Senior Professor Distinction Awards.