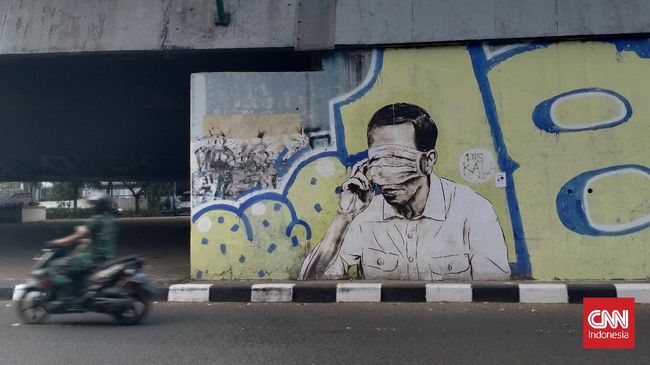 Commission for Missing Persons and Victims of Violence (Contrast) considers the government of President Joko Widodo (Jokowi) are still allergic to critical. This can be seen from a number of cases of attempts to silence or limit free speech throughout 2021.

KontraS recorded 26 cases of attempted silence from January to September 2021.

KontraS coordinator Fatia Maulidiyanti said the restriction of expression was done without any measurable parameters.

Fatia said based on data compiled by KontraS, efforts to silence him included removing the murals, hunting down actors from the documentation, persecuting content creators, and arresting several people who broadcast. posters to President Joko Widodo.

Fatia said that in July-August, her party recorded 13 cases of persecution against mural artists. Of the 13 cases, 11 of them were the removal of murals in various regions, 1 was the persecution of a wall content maker in Tangerang, and 1 was an act of hunting for a wall documentation actor.
“In the end, the victim was visited by the police,” said Fatia.

“The most recent case happened with several students from Universitas Sebelas Maret (UNS) who put up posters containing criticism of President Joko Widodo when the president was in Solo,” Fatia explained.

According to Fatia, the series of events of the restrictive measures shows that the state does not leave room for the expression of criticism against the public.

The series of silencing acts, Fatia said, shows that the escalation of restrictions on free speech that is occurring in both the real and digital world continues to increase.

Fatia said this phenomenon contradicted President Joko Widodo’s statement that he called on the public to criticize the government. Meanwhile, on the other hand, the government does not guarantee the space and form of expression of criticism by the public.

In February 2021, President Joko Widodo called on the public to more actively criticize the government’s performance.

KontraS urges President Jokowi to guarantee all forms of space and expression for its citizens. Jokowi was also asked to give firm instructions to state officials.

“In order not to easily silence all forms of expression of citizens,” said Fatia.

In addition, KontraS also asked the national police chief to order his subordinates not to act arbitrarily in responding to the public’s freedom of expression.

“Security approaches, such as arbitrary arrests, criticism leading to the ITE law, silence and others will only further hamper efforts to convey criticism from the public, which can lead to mistrust. towards the government, ”Fatia said.