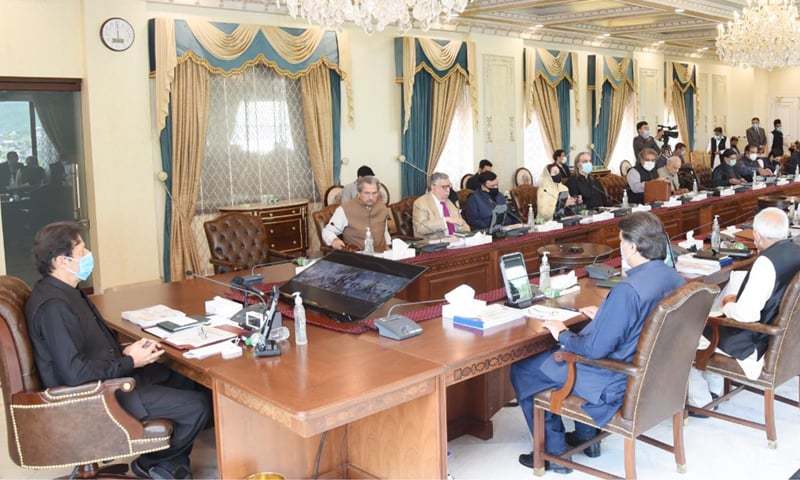 The meeting, which was chaired by Prime Minister Imran Khan, was also informed that more than a million cyberattacks had been attempted on Pakistani websites and that India, with the help of Israel, had made a report. unsuccessful attempt to hack the Prime Minister’s cell phone. Khan.

Prime Minister Khan expressed disappointment at the delay in the supply of wheat and called on the Punjab government for its immediate release in order to keep commodity and flour prices stable.

The cabinet took the important decision to introduce comprehensive reforms to the outdated criminal justice system in order to ensure speedy and inexpensive justice.

Information Minister Fawad Chaudhry said the decision on the proposed 10% salary increase for parliamentarians was taken in light of the Prime Minister’s austerity campaign that was being implemented from the very first day.

The Prime Minister’s House made huge savings and the National Assembly saved 1.54 billion rupees, which was returned to the national kitty, Chaudhry said in a statement televised by Pakistani state television (PTV ).

It was unusual for the minister not to hold a press conference after the cabinet meeting and choose to broadcast his statement on PTV.

Regarding the proposed increase in the salaries of parliamentarians, Mr. Chaudhry said: The cabinet considered that it was a violation of this principle of austerity given the current economic situation.

The Information Minister said the meeting made a landmark decision to introduce reforms to the outdated criminal justice system in line with Prime Minister Imran Khan’s vision to provide swift and inexpensive justice.

He said the goal of the reforms would be to end delays in trials and remove obstacles to registering the first information report (FIR).

The issue will now be discussed in the Cabinet Committee on Law and Justice and after which the reforms will be implemented, he added.

Fawad Chaudhry said The Guardian newspaper reported that India, together with an Israeli firm, attempted to hack the cellphones of prominent Pakistani people, including that of the prime minister.

He said the firm authorized the Federal Board of Revenue (FBR) to hire (expert) services to secure its data following a cyberattack on August 14.

Hackers attacked the Federal Board of Revenue’s website, however, most of its data remained secure and an operational emergency was declared to secure its data, he added.

This year, around a million cyber attacks were committed on Pakistani websites that were thwarted by the National Telecom Company and a comprehensive cybersecurity framework that was already in place, the minister said.

He said the Ministry of Science and Technology had informed the cabinet about electronic voting machines and voting rights of overseas Pakistanis, adding that the Ministry of Information Technology would launch 5G technology in the countries next year and that several companies had already expressed their interest.

Prime Minister Imran Khan called on the Pakistan Telecommunications Authority to ensure good telecommunications services in all parts of the country so that everyone can benefit from the revolution in the sector, he added.

The minister said the cabinet also gave the green light to the establishment of the Quaid-i-Azam Foundation.

Fawad Chaudhry said Prime Minister Khan was disappointed with the delay in the supply of wheat despite his clear instructions for the commodity to be purchased early.

He said the Punjab had been ordered to release wheat immediately to ensure a gradual reduction in wheat and flour prices in the market.

On a proposal from the Tariff Policy Board, the cabinet agreed to reduce additional tariffs on auto parts from seven to two percent in order to promote local vehicle production.

The minister said the additional tariffs on heavy-duty vehicles had also been reduced from seven to two percent. In addition, he said, prices for cars up to 1,000 cc would drop after additional duties on their equipment were removed.

Meanwhile, the minister said the appointment and transfer to the Office of Immigration and Overseas Employment Protector of Immigrants has been approved.

Mr Chaudhry said that given the situation resulting from the coronavirus restrictions, the cabinet decided to waive the 1% penalty imposed on imported goods that were in warehouses and had not cleared customs on time.

The surcharge would be removed provided the goods clear customs before September 30, he added.

The cabinet authorized the reorganization of the board of directors of Diamer Bhasha Development Company (Pvt) Limited and agreed to change the decision on Pakistani steel plants taken at the Cabinet committee meeting on privatization on August 10.

It also ratified the decisions of the Cabinet Committee on Institutional Reforms of August 12 and September 2 as well as those taken at the Economic Coordination Committee meeting on September 9.

The decision of the Cabinet Committee on Legislation on Automation of the Proxy System for Overseas Pakistanis was also ratified.

The cabinet authorized PIA and Kyrgyz Airlines Avia to operate flights between Pakistan and Kyrgyzstan and also accepted PSO and Pak LNG’s proposal to reduce LNG supply times in line with PPRA rules.

Signature of the presidential decree, Jokowi forms the vice-minister of the PPN