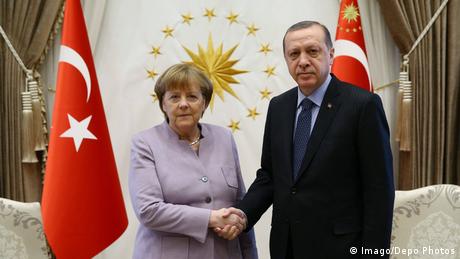 Relations with Turkey have proven to be one of the most difficult foreign policy challenges Chancellor Angela Merkel has faced in her 16 years in office.

Turkish President Recep Tayyip Erdogan’s controversial foreign policy measures, along with his verbal attacks on European states and leaders, and the severe deterioration of human rights in his country, have forced Merkel to make tough decisions.

His government has backed soft EU sanctions against Turkey, restricted arms sales to its NATO partner and even banned election appearances by Turkish politicians in Germany.

But despite criticism from German opposition parties, Merkel refrained from taking a tougher stance that could risk further alienating the difficult president of a strategically important country – a situation made all the more difficult by because of the Turkish community of three million people in Germany.

The longtime German Chancellor has maintained dialogue with Erdogan, visiting Turkey 11 times during her tenure. She focused on finding ways to cooperate with him in times of turbulence and repeatedly stressed the importance of having open channels of communication in order to ease tensions in the Eastern Mediterranean and to seek solutions to them. conflicts in Syria and Libya.

The German elections will be held on September 26 and Merkel is expected to step down once a new government is in place. With this change on the horizon, many wonder if the next Chancellor will continue Merkel’s legacy, moderate approach and diplomatic line in relations with Turkey.

According to Eckart Cuntz, Berlin’s former ambassador to Ankara, Merkel’s well-balanced policy towards Turkey was the only right thing to do – despite deep differences with Erdogan.

“In most of Merkel and Erdogan’s encounters the chemistry wasn’t really the best between the two. The characters are just too different,” he told DW, referring to various encounters he has had. witnessed.

But over the years, the two leaders realized they needed each other and maintained a dialogue despite their very different views and the often strained relations between the two countries.

“Especially with the Syrian refugee crisis, Germany has recognized that such issues cannot be resolved without Turkey; people have realized that we have to deal with Erdogan,” Cuntz said.

“I think the Turkish president has also understood that he cannot solve all the problems without having strong partners in Europe,” he added.

The Chancellor’s decision in 2015 to allow hundreds of thousands of migrants fleeing civil war and humanitarian disasters to enter Germany has earned her considerable backlash from the far right and even some of her colleagues from across the country. Center-right. Soon after, one of his priorities became stopping irregular migration through Turkey to Europe.

In 2016, she concluded an agreement between the EU and Turkey that reduced the number of migrants crossing the Aegean Sea. But it left Germany and Europe “open to blackmail” from Erdogan, critics say.

Former Ambassador Cuntz says Germany has long neglected the Syrian civil war and acted too late. “If we had spoken with Turkey at the time, perhaps we could have avoided major disasters in Syria. Even if we don’t like certain domestic political developments in Turkey or certain political movements external, we must engage with them and also take into account Turkish concerns, “he said.

According to the long-time diplomat, Germany’s new government will now have to engage in a closer dialogue with Turkey, especially after recent developments in Afghanistan.

“In the case of Afghanistan, Turkey again emerges as an important player. Not only for the operation of the Kabul international airport but also for many other issues. Dialogue is absolutely necessary,” he said. -He underlines.

After the Taliban took control of Afghanistan, diplomatic talks have already intensified between Germany and Turkey.

Magdalena Kirchner, foreign policy expert at the Friedrich Ebert Foundation, believes the EU needs Turkey’s support to cope with a potential new exodus of refugees fleeing Afghanistan. “Europe is interested in expanding the 2016 refugee agreement with Turkey. Because it’s something that has proven to be very effective,” she told DW.

According to Kirchner, many wealthy Afghans and middle class people have already settled in Turkey. “Istanbul could be the hub of the Afghan diaspora,” she said.

The EU aims to create better living conditions for Afghans in transit countries like Turkey with the aim of preventing them from continuing their journey to Europe. But Turkey says it doesn’t have the capacity to accommodate more people.

Turkey has already become the largest host country for refugees and asylum seekers, and its people have tolerated them for years. But recently, the mood in Turkey – which has already accepted more than 4 million refugees – has changed dramatically.

“It is also a very hot topic at the national level in Turkey and has also become a weak point for Erdogan. Because the economy is not in a state where it can absorb in addition to the Syrians also the labor force. low-skilled work from Afghanistan. This is something Erdogan cannot ignore. EU money cannot earn [over the] Turkish public, I’m afraid, “Kirchner said.

Human rights are no longer a priority

While Turkey’s EU membership talks are currently stalled due to tensions with Greece and Cyprus, the refugee deal remains at the center of the bloc’s relations with Turkey. The direct dialogue between Brussels and Ankara in recent months has mainly focused on migration issues and the exchange of views on regional conflicts.

Many experts now define EU-Turkey relations as “transactional relations” in which the parties do not share common goals or values, but pursue their interests and cooperate only through problem-specific transactions.

To some extent, Germany’s relations with Ankara have developed in the same direction under Merkel. But if the Green Party joins the new coalition government – which is a strong possibility – things could change.

Kristian Brakel, director of the Istanbul office of the Heinrich Bll Foundation, a German political foundation affiliated with the Green Party, said the EU had little influence over Turkey, given that the EU membership talks EU are currently at a standstill.

The bloc’s only current leverage is economic pressure – and there is a price to be paid, Brakel told DW.

“Merkel answered the question if she was prepared to pay that price with no. And the question now is: would a future German government answer this question differently?”

For Turkey’s export-oriented economy, Germany is the most important trading partner and the Turkish government hopes to increase bilateral trade volume to $ 40 billion this year.

Germany remains the leading trading partner of Turkey’s export-oriented economy. And more than 7,400 German and Turkish companies with German partnerships are active in the country. In an era of global competition, governments find it difficult to sacrifice economic interests – Merkel, for example, prioritized stability and refrained from tougher measures like sanctions, even when tensions soared with Erdogan.

Erdogan’s Justice and Development Party (AKP) has been in power since 2002, and the next presidential election is slated for 2023. But many observers expect early elections next year, and the latest polls show that support for Erdogan is eroding. It is not known if he will run for another term as president.

“In Germany and in Europe, everyone is waiting for the post-Erdogan era. I see it [as] possible, although we know he’s a tough fighter and won’t leave without a fight. But the Turkish opposition is stronger and they have a real chance of winning the election this time, “said Yasar Aydin.” German politicians know it too, and the new German government will probably wait until then before taking any important steps to improve relationships. ,” he added.

While you’re here: Every Tuesday, DW’s editors summarize what’s going on in German politics and society, with the aim of understanding this year’s elections and beyond. You can sign up for the weekly Berlin Briefing email newsletter here, to stay abreast of developments as Germany enters the post-Merkel era.