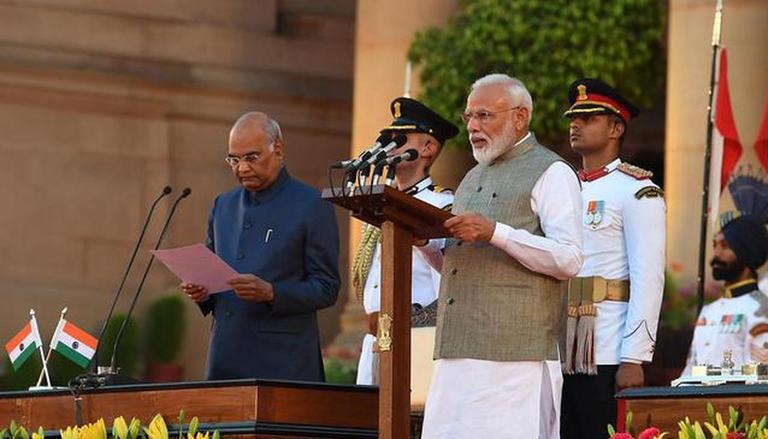 Narendra Modi is fulfilling 20 years to the day in his role as chief political executive, first as Chief Minister of Gujarat and then as Prime Minister of India. It is a rare step in the political career of any leader, anywhere in the world. Vladimir Putin of Russia and Recep Tayyip Erdogan of Turkey come to mind, but an important difference between them and Modi is that the Prime Minister of India has won six democratic elections each with a broader mandate than the previous one in such a diverse regime, fractured and multidirectional like India.

The rise of Modis has been in the midst of a 24/7 media glare, chronicled through millions of inches of print columns in newspapers, billions of pounds on digital and TV space. , as well as books subjecting its policies, motives, commentaries, actions and governance to scrutiny.

I started my career as a reporter on March 6, 2002 in Ahmedabad, Gujarat. It was the first week of what unfolded as the riots in Gujarat following the carnage of the Sabarmati train. The city and parts of the state had become a communal cauldron, and it was literally the baptism of fire to get out and learn the tricks of the journalist profession. Modi had won his first Rajkot election to become a member of the Gujarat Assembly just a week before, after becoming chief minister of state on October 7, 2001. The central leadership of the BJP sent him to replace Keshu Bhai Patel the performance grounds after the Kutch earthquake. A few times in the past, Modi has expressed in interviews the pain he endured during those days. It culminated with the three-day Sadbhavana – harmony – fast in September 2011 in which he underscored the message of inclusiveness in his politics and governance. 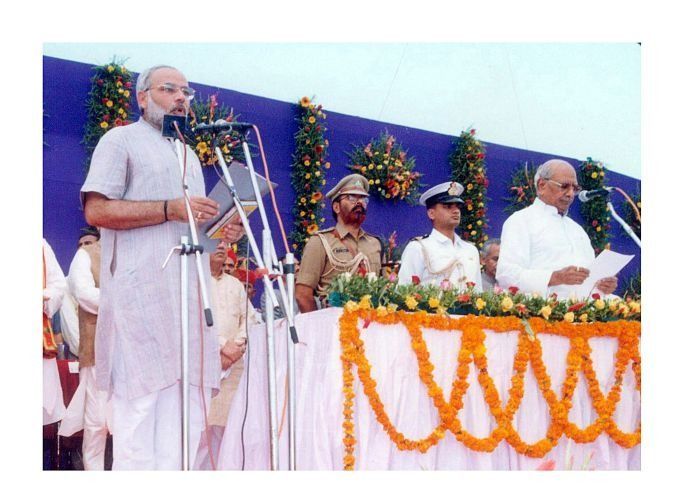 (Narendra Modi sworn in as Chief Minister of Gujarat in 2001)

Since then, I have had a front row seat to witness Modis’ evolution as a global politician, leader, administrator, statesman. One of Modi’s first governance initiatives was the reform of Gujarat government boards and corporations. I witnessed some of them due to my posting in Vadodara where they were based. The corporatization and unbundling of the Gujarat Electricity Board (GEB) as part of the power reforms showed the first signs of Modi as a tough leader who could crack the whip against the slack and blackmail of Sarkari’s unionism. I was attending a meeting in which he criticized a chief area engineer for failing to control the theft of electricity from the Saurashtra pocket, giving bureaucrats chills. The message was clear. Train or ship. Likewise, he reinvented the loss-making government companies Gujarat State Fertilizer Corporation (GSFC) and Gujarat Alkalies Corporation Limited (GACL) by negotiating directly with unions, having pragmatic performance-oriented bureaucrats lead and run them. turn into profits. stock market stars.

There was another aspect of Modi, the leader who emerged over the years – that of a social reformer. Addressing the MS University convocation in 2003, he quoted Abraham Lincoln’s famous letter to his son’s teacher while asking young minds to nurture their ambition beyond government jobs. I found Lincoln’s connection to a Pracharak RSS politician interesting and mentioned it in my copy. In 2006, there was an event at the Palanpur dairy factory in northern Gujarat. Modi achieved her predominantly rural and female audience and delivered a moving speech on the scourge of female feticide. I was present in the crowd and saw the women sobbing. Again, an example of a leader who knew his constituency and was in contact with the grassroots. This will be reflected in the Prime Minister of Red Fort’s first Independence Day speech when in 2014 he urged parents to be tough on their sons by asking them the same questions they would ask daughters while coming out late if they wanted to prevent the evils of society. like rape. 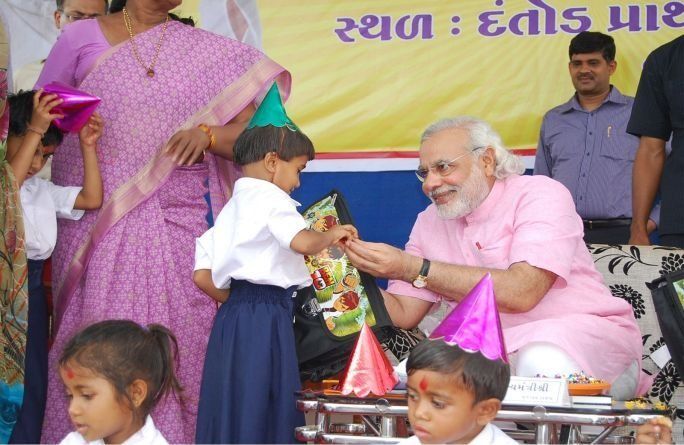 (So ​​Chief Minister Narendra Modi interacting with schoolchildren in Gujarat)

In the summer months just before the monsoon, CM Modi would roam the rural hinterland to educate farmers on modern agriculture and best practices as part of his flagship project Krishi Rath. Some kits would be distributed, including seeds, fertilizers and even farm equipment to poor farmers. After such a campaign, I made a story of the Bodeli block of Vadodara where the harvest of tomatoes from seeds supplied during the last Krishi Rath had failed. That same morning, I received a call from the Prime Minister’s Office informing me that an investigation had been ordered, asking me to connect with the Office of the Director of Agriculture for more information. It was the speed of responsiveness of the Modi administration. 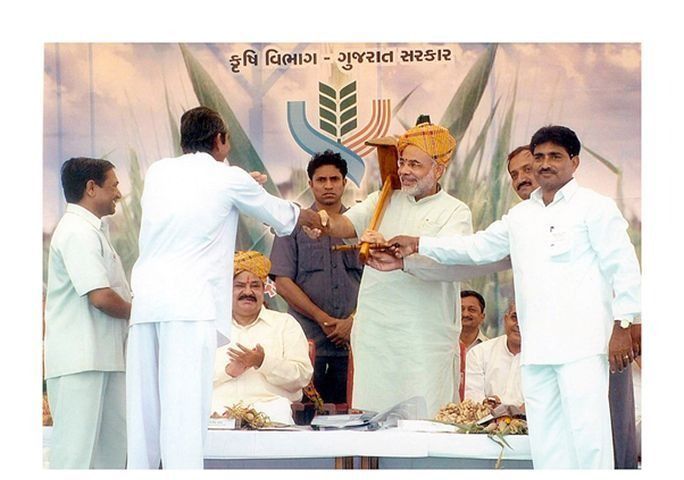 During the December 2007 election campaign for the Gujarat Assembly, I covered the Ahwa-Dangs tribal district in southern Gujarat. Modi addressed a rally there and delivered a significant portion of his speech in the local Dangi dialect, which is a mixture of Marathi, Gujarati and tribal languages. It was impressive, and I found it doubly because a few days later Sonia Gandhi addressed the area 100 km away in Chikhli in her heavily accented Hindi. Incidentally, this is the speech in which she made the Maut-ke-Saudagar commentary reversing the tide decisively in Modi’s favor. And not entirely by chance, the BJP won the Ahwa-Dangs seat for the first time in this election!

Around this time, an old friend from college in the United States sent me a DVD of a documentary An Inconvenient Truth – by former US Vice President Al Gore. By bringing the science together, Gore had shown the scale of the catastrophe humanity faces due to global warming. I had it sent to the Chief Minister through his PRO the late Jagdish bhai Thakkar. I was told that the CM was impressed, and a few days later we received a press note saying he had watched the film with his ministers and senior officials at a dinner at his official residence. A few months later, the government of Gujarat became the first in Asia to set up a climate change department! Shows how quick the Modi admin is at spotting important trends and focusing on areas of concern. His subsequent involvement on the subject made him a global leader on climate change, creating an International Solar Alliance (ISA) of 55 nations strong in India, convincing the global community of climate justice and even writing a book in response to Gore. titled Convenient. Action. 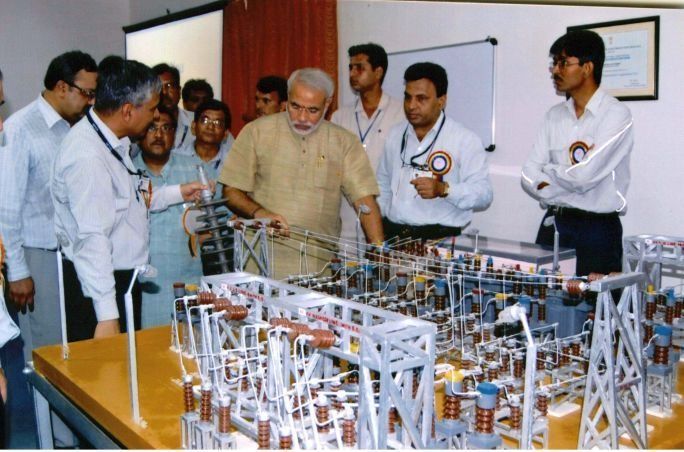 In 2008, I was attending a Gujarat Assembly Question Hour when a young congressman struggled to make his case amid the din about the prevalence of sickle cell disease in the tribal population of the State. Modi called on President Ashok Bhatt to clean up the house and berated his own party colleagues so everyone could listen to the young tribal community lawmaker. He could go beyond the narrow division of parties for the greater benefit of society.

For someone who has carried the image of a strong Hindutva leader, Modis’ commitment to Gandhi and, as an offshoot, to the toilet for cleanliness makes him an outlier. At his first campaign rally in the south in Hyderabad after becoming the BJP’s candidate for prime minister in 2013, Modi ended the speech with a Yes We Can chant which was followed by the raving crowd. I was there to cover the rally and found it funny that an Obama slogan was used, which I have mentioned in my life. Later that evening, I received a call from the Office of Chief Ministers, informing me of a speech by Junagadh in 2007 in which the CM asked the crowd to sing Yes We Can, Yes We Can. The subject of the songs was a campaign to obtain toilets in public spaces in Gujarat. I was even sent a clip. Yes We Can cannot be a copyright of Obama.

Throughout these years, whether it was organizing additional funds to bring a water pipeline to the furthest border point in Kutch for BSF troop patrols, or surrendering in the remotest outposts of the northeast to be with soldiers in Diwali, to organize a big event to honor the constitution on the 60th anniversary of its adoption, Modi had a sense of the fate of his national role which is finally materialized. Since 2014, we have seen it parading before our eyes.