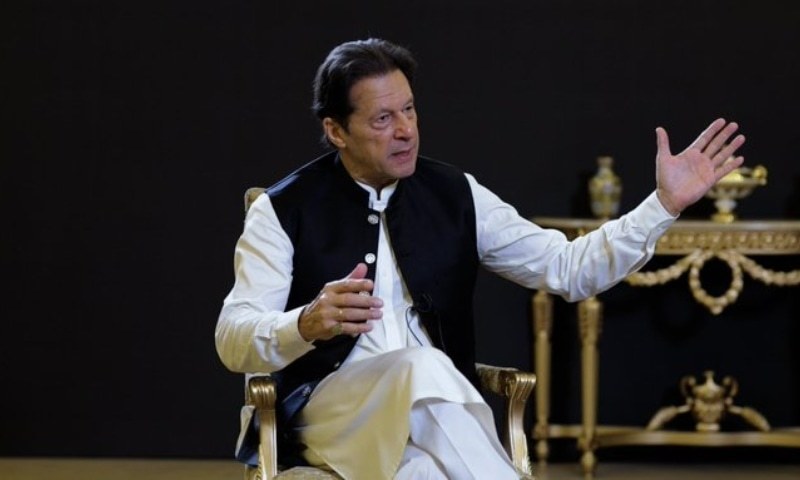 Prime Minister Imran Khan on Monday again stressed the need for the international community to engage with the Taliban and said failure to do so could set the group back 20 years.

In an interview with Middle East Eye, the prime minister touched on a wide range of topics, including the current situation in Afghanistan, relations with the United States, Indian actions in occupied Kashmir and allegations against China regarding the treatment of Uyghurs.

Stressing the need for the international community to engage with the Taliban government in Afghanistan, Prime Minister Imran said 20 years of civil war had devastated the country.

He said that after so many years, members of the Taliban who had made sacrifices would like to be rewarded by being placed in the hierarchy of government.

“Yet the government is clearly trying to gain international acceptability, so it wants an inclusive government, talks about human rights and doesn’t allow anyone to use its land for terrorism,” he said. , adding that this was a critical point for the war. – torn country.

“The world must engage with Afghanistan,” he said, warning of the consequences of not doing so. “There must be extremists within the group [and] it can easily be traced back to the Taliban 20 years ago. And that would be a disaster. “

He said that if Afghanistan fell into chaos again, it would become fertile ground for terrorists like ISIS, which is a concern for all countries in the region.

“It would be a total mess, what will the United States have to show after 20 years? Therefore, a stable Afghan government that can then face ISIS, and the Taliban is the best bet to face ISIS, it is the only option left. “

He said isolating and imposing sanctions on Afghanistan would lead to a massive humanitarian crisis.

“If they are left like this, my worry is that [Afghanistan] could go back to 1989, when the Soviets and Americans left, ”he said, adding that more than 200,000 Afghans died in the chaos.

Prime Minister Imran added that the United States had to “pull itself together” after the shock it had suffered following the withdrawal of forces from Afghanistan.

“I don’t think they have found their feet yet,” he said, adding that Pakistan would also suffer from the chaos in Afghanistan.

Asked about Pakistan’s point of view after the Taliban takeover, the prime minister said: “We were relived so much because we expected a bloodbath. […] it was a peaceful transfer of power “.

The prime minister said there were a number of reasons for the lack of resistance from the Afghan army, including the corruption of the former government.

Pressed by the lack of inclusiveness in the new government configuration, the Prime Minister admitted that she was not present “for the moment” but hoped that she would be in the future, adding that it was necessary because Afghanistan was a diverse society.

Likewise, on the issue of women’s rights, he said the Taliban should be encouraged to “lead by example,” noting that the group had said it would allow women to work and learn.

“All insurrections end up on the dialogue table”

Asked about the Tehreek-e-Taliban Pakistan (TTP) issue banned for the country, the prime minister said the Pakhtuns on the Pakistani side of the border started attacking the state when it allied with the American invasion of Afghanistan.

He added that this movement and its motivation died out once the American footprint diminished and Pakistan ceased to be a collaborator.

“We are no longer collaborators because we did not ally with anyone who is fighting the Pakhtuns, so the motivation has gone down. Now we are trying to talk to those who can be reconciled because it is in a position of strength.

“I think all insurgencies end up on the dialogue table,” said the Prime Minister.

He stressed that the Taliban had assured Pakistan that they would not allow Afghan soil to be used against any country. This was in contrast to the previous Afghan government, which it said helped Indian agencies carry out attacks on Pakistan.

The prime minister also scoffed at the US policy of carrying out drone attacks in its counterterrorism efforts, calling it “the most insane” method.

He attributed in part the rise of the TTP to collateral damage suffered as a result of US drone attacks and military operations in tribal areas. “Every time the military enters civilian areas, there is collateral damage.”

When asked if he would allow US bases in Pakistan for action against ISIS, Prime Minister Imran said: “I think they don’t need a base here because we don’t want to be part of the conflict anymore. ”

He said no country has paid a price as heavy as Pakistan in joining the US-led “war on terror”, but lamented the country being a scapegoat.

Asked what US President Joe Biden said in response to concerns in Afghanistan, the prime minister said he still hadn’t told him about something interviewers called “astonishing.”

He said he warned US officials in 2008 of the futility of a military solution to the Afghan problem and the potential creation of a “bigger quagmire than Iraq”.

“Unfortunately I think they were led by the generals and you know what they always say: give us more troops and more time.”

“In all our ups and downs, China has been by our side,” he said, adding that China had helped Pakistan in times of crisis when “we were falling apart.”

Asked about his silence on the treatment of Uyghurs in China, the prime minister said he considered “selective statements about human rights” to be immoral.

The prime minister also asked why there had been no criticism of Indian actions in occupied Kashmir or its treatment of Muslims and minorities.

He said Pakistan had spoken to China about the Uyghur issue and had received an explanation. “Our relationship with China is such that we have an understanding between us. We will talk to each other, but behind closed doors because that is their nature and their culture.”

He said the Muslim world was in turmoil and the government wanted to highlight the Kashmir issue and human rights violations in the occupied valley.

“Let the world hear about it first, then we’ll talk about other human rights violations.”

“No pressure to recognize Israel”

Asked about Israel’s treatment of Palestinians and whether it had provided India with a “model”, the prime minister noted that the two countries were very close.

He pointed out that Indian Prime Minister Narendra Modi cracked down on occupied Kashmir on August 5, 2019, after his visit to Israel.

“Do we think he got his instructions from there? Because that’s what Israel did. They built such a strong security apparatus and are crushing everything. They will send people and kill [and] murder and they enjoy full immunity. ”

He said India felt it had the same immunity and could get away with anything. “The worst human rights violations [are taking place] in Kashmir, nowhere [else] maybe in Israel, but nowhere are things as bad as in Kashmir. ”

The prime minister also denied any pressure from Gulf countries to recognize Israel and said Pakistan was a democratic country that could not take any unilateral decisions without involving the people.

Prime Minister Imran was also asked about his reaction to the England and Wales Cricket Council (ECB) decision to cancel the tour to Pakistan scheduled for November.

He said he had observed the evolution of Pak-England cricket ties over the years. “I think there is always this feeling in England that they are doing a big favor by playing for countries like Pakistan,” he added.

The Prime Minister said that no one “would dare do this to India” because of the power and financial resources of the Indian Cricket Council. “I didn’t say anything, but I think England let go because I expected a little more from them.”

He said the England and New Zealand cricket teams had let themselves down by canceling tours on the basis of “something we know to be fake news initiated by an Indian via Singapore”.

The PM said England players should think about how they would feel if they were treated in this way by another country.

Indonesian President appeals ruling against him for contamination