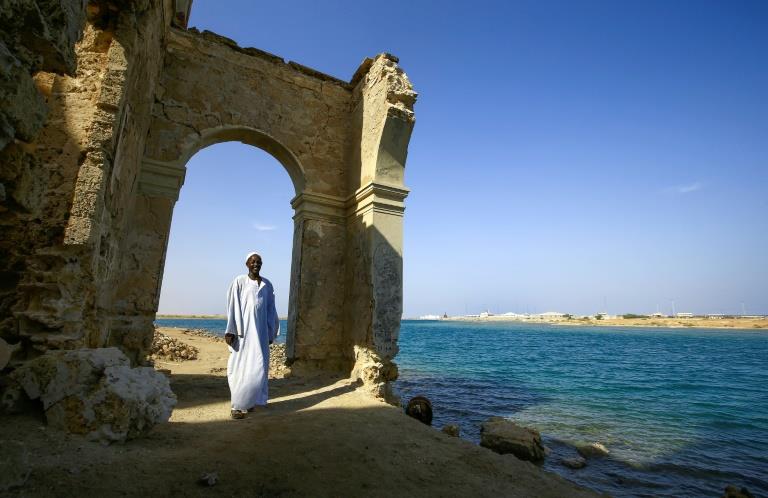 From Washington to Moscow, from Tehran to Ankara, Sudan’s strategic ports on the Red Sea, blocked for a month by demonstrators, have long been ogled by world powers far beyond Africa’s borders.

Boasting natural resources such as gold and rich in maritime biodiversity, the scenic region of white sands and mangroves stretches 714 kilometers (444 miles) – from Sudan’s borders with Egypt in the north to Eritrea in the South.

But traffic through Sudan’s main maritime nerve center, Port Sudan, has been crippled since anti-government protests erupted in mid-September amid disillusionment with the region’s political and economic marginalization.

Thus, since October, much of the trade has been redirected through other regional ports, mainly to Egypt.

The protests are just the latest chapter in decades of intense internal strife between tribes and factions, driven in part by Sudan’s shifting political alliances under ousted President Omar al-Bashir.

He was impeached in April 2019 after mass protests against his three-decade Iron Fist rule.

Protesters say they oppose an October 2020 peace deal between Sudan’s post-Bashir transitional government and rebel groups because “it does not represent them.”

Protests in the east also sparked unrest in the capital Khartoum, where pro-military protests erupted on Saturday demanding the dissolution of the ailing transitional government.

But for foreign powers that covet the Sudanese Red Sea coast, the region has strategic military dimensions.

It hosted Iranian fleets for decades under Bashir, much to the chagrin of Tehran’s regional rival Saudi Arabia, whose port of Jeddah on the Red Sea sits across from Port Sudan across the way. navigable.

And in 2017, Russian President Vladimir Putin and Bashir negotiated the construction of a naval base in Port Sudan, which will include up to 300 military and civilian personnel and nuclear-powered ships.

In the same year, Bashir also signed a 99-year lease for Suakin Island with Turkish President Recep Tayyip Erdogan, a move that angered Egypt and other rival Sunni Muslim powers with concern about the growing regional influence of Ankara.

The agreement provides for the maintenance of buildings, docks for ships and the renovation of Ottoman-era buildings on the island.

The Egyptian pharaoh Ramses II would have nicknamed Suakin the “white city” because it shelters spectacular buildings in porous coral limestone extracted from the coral reef.

Suakin is one of many Red Sea islands held by Sudan, which analysts see as “integral to the country’s national security.”

The islands cover a total area of ​​23,100 square kilometers (89,100 square miles), which is equivalent to the size of Djibouti, said Shaimaa Abdelsameea, professor at the University of the Red Sea.

These islands could be used as observation outposts or to conduct military maneuvers, she noted.

“However, they are all uninhabited, which makes them vulnerable to illicit activities, including smuggling,” said Ahmed Abdelaziz, professor at the University of Port Sudan.

Sudan had sought to cement its ties with Russia under Bashir to offset crippling sanctions imposed by Washington against its autocratic regime.

And last year, Moscow announced the signing of a 25-year agreement with Khartoum to build and operate the Port Sudan base.

However, in June, Sudan said it was “still reviewing” the agreement after finding that some clauses were “somewhat damaging”.

The move came as Khartoum struggled to solidify ties with the United States following Bashir’s ouster.

In December, Washington removed Khartoum from its crippling list of terrorist sponsor states, a designation that had long strangled the Sudanese economy.

The lifting of sanctions came after a meeting between former US President Donald Trump and Prime Minister Abdalla Hamdok.

Senior US military officials have since visited Sudan.

“The Red Sea is a key waterway for the movement of US fleets,” according to Abdelsameea.

“It connects the US Sixth Fleet in the Mediterranean and the Fifth in the Arabian Gulf,” she said.

“The race to control Sudanese ports is therefore very natural.

Legal warning: MENAFN provides the information as is, without warranty of any kind. We accept no responsibility for the accuracy, content, images, videos, licenses, completeness, legality or reliability of the information contained in this article. If you have any complaints or copyright issues related to this item, please contact the supplier above.