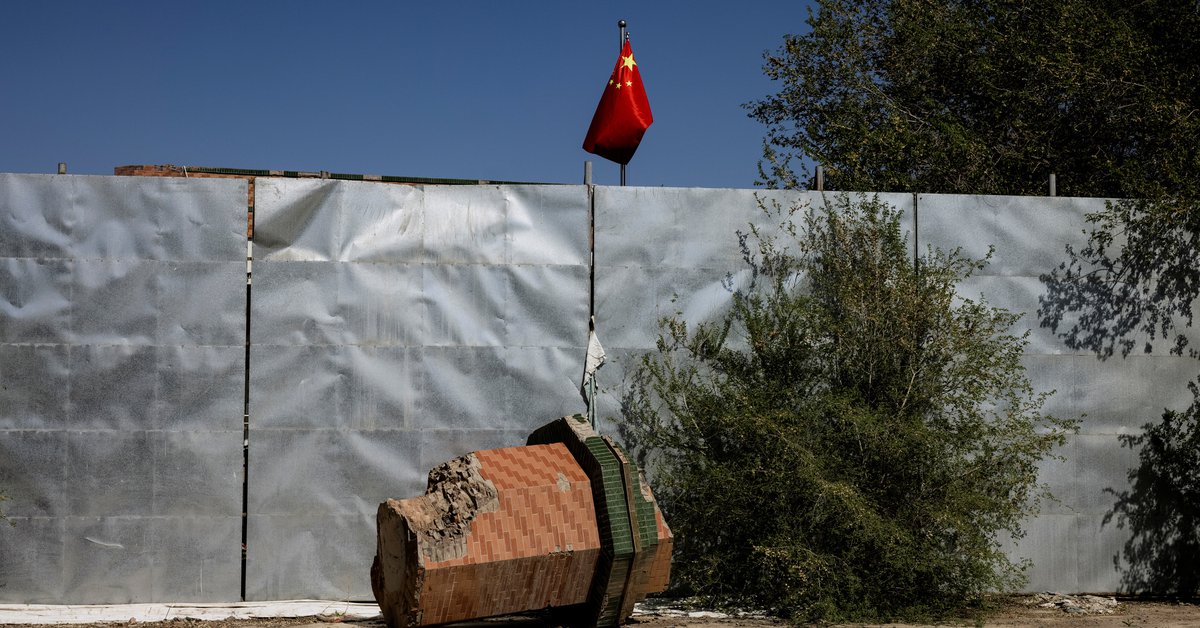 A collapsed mosque minaret is seen in front of a Chinese flag in Changji in the Xinjiang Autonomous Region. Regime wants mosques to no longer have Islamic influence, but to retain a more traditional Chinese look (Reuters)

China removes domes and minarets from thousands of mosques throughout the country because, for the authorities of the regime, they are evidence of foreign religious influence and part of overtly Islamic architecture who seek to eliminate from the landscape of their cities. This offensive is part of an initiative to the different ethnic groups that inhabit the territory are assimilated into the population and are getting closer and closer to traditional Chinese.

This strategy has gained in importance with the arrival of Xi Jinping in power in 2013. Previously, there was a classification of citizens into 55 different ethnic minority groups, which enjoyed a certain cultural autonomy in their territory. But that changed with the arrival of the new party chairman and an approach that aims for the assimilation and integration of minorities. This process is called by Chinese authorities as sinization process.

An example of this assimilation is that of the Muslim community Hui, who have lived in China for more than 1,300 years and number around 10.5 million people. These have adapted both culturally and linguistically and even modified their version of Islam to make it accessible to Confucians and Taoists – two doctrines particularly strong in China – by adopting spiritual concepts and terms from philosophy. ancient Chinese to explain Islam. In addition, many Hui groups have adopted Chinese religious practices for their worship.

In this file photo, Chinese regime leader and Chinese Communist Party leader Xi Jinping delivers a speech at a ceremony marking the 100th anniversary of the ruling Communist Party in Beijing, China on Thursday, July 1, 2021 (PA)

Corn in Beijing the concept of what it means to be Chinese is much more limited that they simply resemble the Chinese and incorporate certain practices of dominant religions into minority cults. For those who rule adhere to the values ​​of the Communist Party, reject any foreign influence and speak only Mandarin Chinese.

The demolition of the domes and minarets of mosques is framed in this key to eliminate foreign influence. In this particular case, it is Arab and Saudi influence. Under this premise, Chinese authorities removed the domes of most mosques in the northwest of the country.

In 2016, Xi Jinping gave a speech in which he first referred to sinization and explained that minority ethnic and religious groups should put Chinese culture ahead of ethnic differences and carry high the flag of Chinese unity.

A mosque without minarets in Changji, Xinjiang. The scene is becoming more normal in other parts of China on orders from Beijing (Reuters)

Although there was initially some resistance to the removal of the domes, it was quickly quelled. Residents of Xining City claim that Dongguan Mosque Director and City Imam Arrested and Forced to Sign in Support of Dome Removal. Thus, the campaign against domes and minarets enabled the regime to justify the imprisonment of citizens belonging to these minorities, the confiscation of mosque property and the closure of religious institutions.

Progress has also been made in a non-Chinese language restriction campaign and schools were forced to reduce their time in favor of teaching Mandarin Chinese.

The situation of the Uyghurs in Xinjiang

China’s efforts to control cultivation are most important in the western region of Xinjiang, where the authorities detained hundreds of thousands of people of the ethnic group uigur in detention centers which, according to the government, function as educational camps in which the Chinese language and the history of the Communist Party are taught. These multiple human rights violations and overcrowded conditions have been documented as falling under the category of torture..

According to Amnesty InternationalDuring the first weeks or months of internment, detainees are forced to remain in their cells sitting or kneeling without moving, without being able to speak, lie down or sleep. After this initial period, begins the process of forced education, which aims to get them to renounce Islam and speak their mother tongue, adopt Mandarin Chinese, and they are brainwashed by the propaganda of the the Chinese Communist Party (PCC).

In the Xinjiang region, where most Uyghurs live, the state has also damaged and demolished thousands of mosques and religious sites.

Rayhan Asat’s tireless fight against the persecution of Uyghurs in Xinjiang: My brother is a shadow of what he was
Wang Huning, responsible for cleaning up social networks in China at the request of Xi Jinping

Boris Johnson’s plan has sparked fear in the EU, according to an insider who believes Brussels “misjudged” the prime minister. »Wire